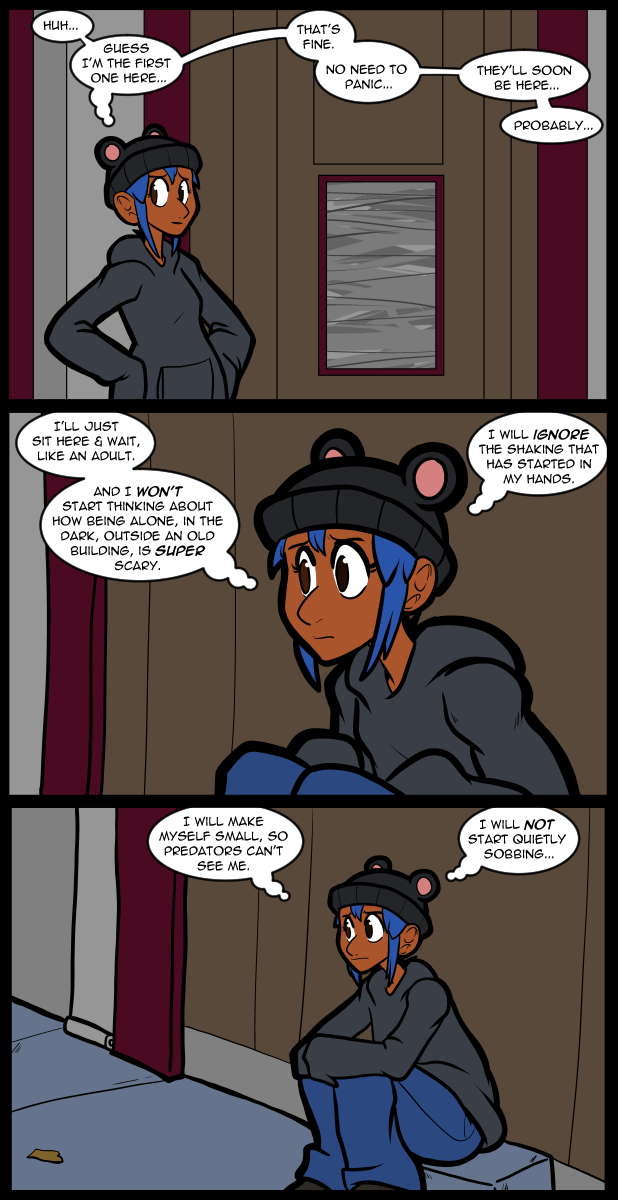 It’s hard to explain an irrational fear that has slowly grown into a phobia. Some imbalance in your head makes situations seem more dire than they actually are. On some level people understand fears, since every human experiences them, but they don’t always understand irrational fear. Sometimes there’s a genuine basis for fear of unknown places, or being alone in the world. For Jo she’s a very small woman & she’s right to be, at the very least, wary of strangers & careful when alone in the open. That said, she’s not really in much danger in rural Kansas, a block from the police station. Something in her makes her fight or flight instinct go into overdrive in almost any situation that is tense, or unfamiliar. It has shaped her as a person, although most of her friends have no idea to the degree it does. They think she’s shy, & timid, but it runs deeper than that. Jessica has at least some understanding that it’s most likely a disorder, or verging on it. Jo suffers in silence because this kind of thing is looked on as weakness instead of a disorder by the general public, & she has internalized that.

Oh, I forgot to plug the Patreon & Subscribestar at the start. I guess it doesn’t matter if I do it here. I’ll switch it up.

The mind can sometimes be your worst enemy, especially if you’ve recently seen or read something scary. There are familiar places that can suddenly be not-so-comforting with a stray shadow or creak. It can even be worse for the intelligent and creative, as you have a bigger amount of scary ideas to bounce around in your head.

Sorry, I may have projected a bit there…

No, you’re right. I remember the first time I was ever alone at home over night. My parents insisted I keep my room’s door open so the dog could come in and out. The house also had a tendency to creak at night. I still remember the sounds that to my head sounded like footsteps. I don’t know if it was the creaking, or just my brain making it up.

Recently seeing/reading something scary can certainly do it, but I figure experiencing it makes it worse. Not really a fear response, but last september someone else on my floor abandoned their suite and cockroaches ended up festering there, and began spreading out, visiting my apartment. Thankfully the company I rent from handled getting a pest technician in and eradicated them, but if I spot a shift of the light out of the corner of my eye, or even just a strand of hair coming loose, my immediate instinct is to expect to see one of them again.

This is a very relatable internal dialogue. One that I also try to ignore.

Is it irrational? Yes; that’s what a phobia IS – an irrational fear of something. It doesn’t matter if the something is actually dangerous or not.

Jo’s doing a very good job of controlling her phobias here. Which doesn’t mean she’s not genuinely scared half out of her wits. I hope the rest show up soon…

Yeah. An irrational fear doesn’t really grow into a phobia- if the fear really is irrational-and causes observable physical symptoms-it IS a phobia. It’s not irrational to have a pretty strong fear of snakes, because some are venomous and therefore very dangerous. Someone with a phobia of snakes will have an elevated pulse and physical symptoms of fear from a picture of a snake.Its not a phobia to fear something that IS dangerous.

True, but for some people that picture can trigger a full-bore panic reaction; that IS a phobia because the picture is completely harmless.

Don’t tell Jo, but a block can be an awfully long way from somewhere, especially a police station. Given how people went together before, I’m a bit surprised there wasn’t an agreed meet up point before descending on big dark scary abandoned building in the dark. But people do makr mistakes like this and we would have missed out on some detailed reveals about Jo just now.

The brain definitely does weird things to you.

Example: sometime over the last 40-or-so years, I cannot stand to be outside the house in the dark. If I have to go outside to the car, for example, I get very panicky.
I also have a vague but very distinct feeling that something is watching from the woodline.
Not sure why or precisely when it happened. I used to play hid n seek in the dark here. And go for hikes in the woods up the hill back of our place. Now I don’t think I could, at least alone, without a firearm.

Fear is so weird, easy to understand the mindset that creates a Jason, a Michel, or a Hannibal. Sometimes I’ll be down in The basement – in the workshop, and BAM!! Something triggers in my brain, and I cannot be alone, ….I guess I would pass out from panic.
Other times I can be alone in the basement workshop for hours and nothing happens. Couple of months or a year later, I’m working there not thinking any weird thoughts, I’m focused on my project, and BAM!! The fear attacks my brain, and I run, not screaming, I don’t do screaming, but I do run out of the basement to wherever the people are.

I hates it, yesssssss, we hates the nasty dark thingsssssss.

Truly irrational? How about a phobia of swinging things? Like, swings that have had their occupants hop off but are still going, or car keys, or promotional signage hanging from the ceiling in shops and twisting in the aircon, or *shudder* wind chimes. I can turn away, but I know they’re still there and can see them in my mind’s eye, twisting. (Those windsock figures they put outside car yards and such? No problem at all.)
In the case of wind chimes, I can’t escape them, because they’re beautiful (I like the sound) and my neighbour loves them and I have no right to impinge upon her, but I dread windy nights, ’cause I won’t be getting any sleep.
*That’s* irrational.
I think Jo’s internal dialogue is spot on. You do have to talk to yourself that way, put on your big girl pants and do what needs to be done.