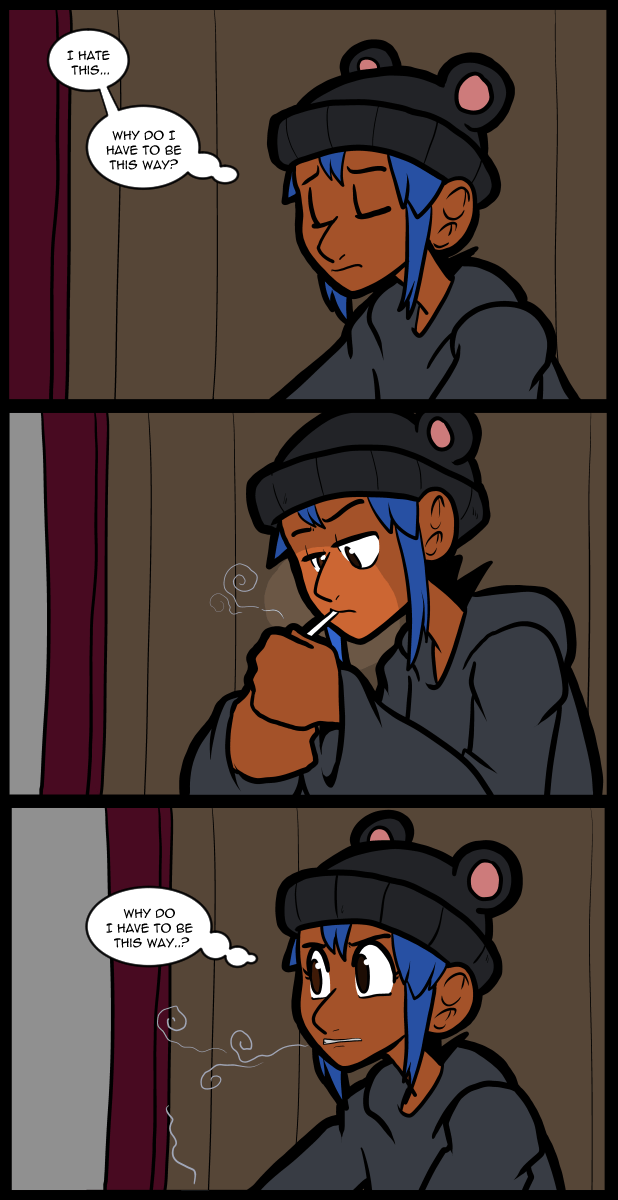 I always hesitate to do character moments like this, but this is really the only way I can think of to begin to show the pain that Jo suffers through silently. The degree to which anxiety impacts her day to day life is something she hides because we are all passively taught never to show weakness. Some of use are openly taught this… I don’t know the solutions to this problem. I just know the way it feels. Maybe looking at it will help someone smarter than me figure out what to do about it.

Brooksie could probably benefit greatly with an emotional support animal. I strangely see her with a pig.

There can be several sorts of factors as to why someone is as they are: Family genetics, unexpected circumstances in life that shape the character of one’s self, personal choices and the consequences thereafter.

Things happen and it can have a profound effect on one’s self, sometimes for years to come. What there needs to be is a genuine understanding between people of why they are based on what has transpired. Being indifferent to others doesn’t exactly help both sides and it could leave the individual suffering in silence when all they really want is for someone to listen to their story.

At the end of the day, knowledge IS power but it’s how you use that power that’s important.

As someone who suffers from anxiety, manic depression, and autism, I cannot overstate the need to reinforce yourself positively. More than any medication, any therapist, any support network, changing how I think about things has made the biggest difference in my life, and has led to a huge boost in my general happiness level even without changes in my overall situation and lifestyle.

It’s certainly not easy, especially for people like me whose first instinct is to snark about things. But getting yourself used to saying, “You know what, I’m actually really smart. I know how to figure things out, and if I don’t, I know how to look for how,” makes it easier and easier to not only believe it, but actually become it. So many of us are conditioned to fear failure and take the easy way out, but I’ve learned more in the past ten years just by taking the chance and trying new things with that mantra than I ever did in therapy or school.

No one has to stay broken. It takes a lot of effort, and there will be occasional relapses, but you have to tell yourself that they’re temporary. Tomorrow will come. The next attempt will be better, even if it’s not a success. And success will come because I’m capable of it.

If you are under 25 and just figured that out, you are amazing. I didn’t learn This until I was 35, essentially Hit Points at 50% damage. If you get it before you are half done, that is Super Good. (Assuming a 70 year life average)

I figured it out at 24, actually! With some good friends to prod me along, so I’m luckier than most, I feel.

Thank you. I had a big thing to add. But no, just thank you.

You’re welcome! I hope my experiences help, even if only as small inspiration.

probably one of the most destructive things false shepherds teach is that we are wretched and worthless beings that must be saved.
Rather than the truth that we are worthy, wonderful, glorious creations that were worth saving from the inherited debt of our ancestors. Wanted, desired, worthwhile.

First with the head then with the heart. Like Endg4mer said, the thoughts one thinks about oneself are paramount. But there is a physical input as well: Diet and reduce stressors. (have several first hand accounts of how changing only diet made massive differences in mental challenges)
Those are plans made with the head, but you have to believe it in your heart so when your head gets confused, your heart carries through and walks the path.

The most unfortunate thing I’ve witnessed in the world is that many/most stressors on people seem to come from poverty. When the world runs on money, and it takes money to make money, nothing is more debilitating to progress in any aspect, in any direction, then the absolute lack of any money to even try and course correct for. Which sucks on so many fronts, no one should be trapped in a situation just because they can’t pay to improve their lot.

one can combat this by not wanting as much, the old bear necessities!
However, i do agree, it is wretched how much poverty is artificially created by pride and greed.
Property prices and the cost to keep a roof over ones head is insanely high these days, and it doesn’t need to be, but there is a very specific agenda driving that inflation, and people fell for it decades ago with the credit game among other things.

however focusing on the stresses and issues that are so big and beyond our control is one way to paralyze action to take care of what you can do: stop being around people who are negative in your life, making your space one that you can be at peace in, cut out excess’s that sap away finances etc.

All is easier said than done for sure though.

I feel like a lot of comments before mine tackle most of the things pretty well, though the way the question was phrased, I read it a bit differently.

The one I read might be the hardest to answer though. Or at least the one where the answer isn’t just one answer at least. Being able to hide your weaknesses often seems necessary in this world after all, especially if for whatever reasons you feel like you always have to jump at every shadow and tiptoe around every eggshell.

But the more you do that and the more you stay on your guard never really expressing yourself or your worries because of that fear the further away you end up getting from those around you or at least feeling, so its something that at least in my experience cycles to a worse problem.

The closest thing I’ve found to a solution to being afraid of showing weakness is to find people you can share those weaknesses with however. People who can accept that you aren’t perfect and untouchable and over time, with any luck and hopefully a lot of help it starts to feel like you’re allowed to at least sometimes be the way you are, even if some of those times are still not very pleasant of times.

Well, the heavier end of things aside, scenes like these might help in their own way. Because its so relatable of a sentiment. Because it makes us question if this is really the way things should be. Because even if its hard to show ourselves the same care sometimes, its a little less difficult when its someone else suffering from the same or similar things, even if its just a fictional character doing so in a way that sells us as readers on it being another person.

I have nothing to add on the subject.

I don’t really have anything to say about this particular comic, but I couldn’t help but comment twice along the way while reading the backlog archive because I just can’t hold in my impressions. And I just got caught up.

This comic is GREAT!!!

How did I never know this existed until two weeks ago???

I
LOVE
THIS
COMIC!!!

I could get into urbane and nuanced conversation (or rather, a monologue since it would only be me talking), but I have lots of things to do (which is why it took me almost two whole weeks to catch up on the archive, but I am still BLOWN AWAY that a comic this good can have existed this long without me having any awareness of it whatsoever.

Jackie Wohlenhaus, you are a friggin’ genius!

The expressions on her face…added to what she’s saying, it’s hitting too close to home.