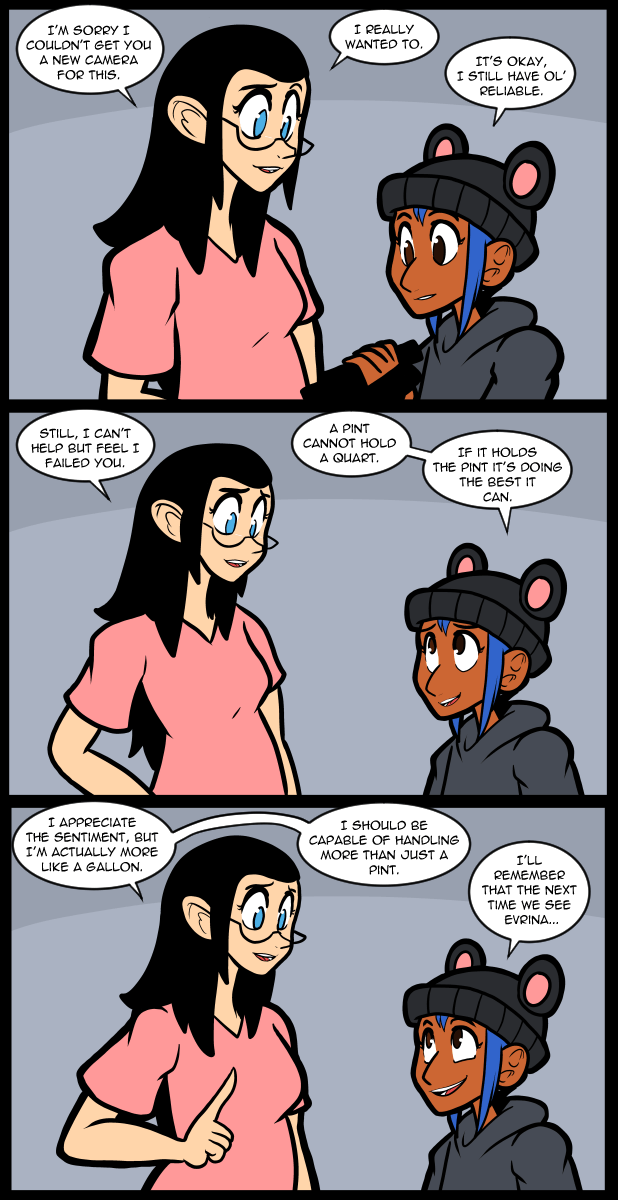 It’s been a bit of a rough day. I think I’m gonna keep it simple & remind you that Patreon & Subscribestar exist & not burden you with my issues.

Jessica Walter died today, or yesterday depending on how you read the dates on my posts… Anyway she had a good run, but she was on Arrested Development, which is a show that means a lot to me. I started watching it when I was having a pretty rough time of things & it really helped me get much needed laughs. I know hat these older actors I like aren’t going to be around forever, but still. It’s natural to mourn & we shouldn’t be ashamed of feeling what we feel.

Anyway, Jo is pushing for some multiple people lovins. She’s framing it as a joke but I hope people are picking up on the “I’m trying to see how you react to this” vibe she has whenever she says stuff like this. For her humanity is like a buffet & she’d like to get multiple plates…

Jo is the most relatable character in this comic.

She means in terms of her mental capacity & capability as a person.

I though she was referencing the total capacity of her mammary glands.

She thinks quite highly of herself then. I would judge myself to be a pint most of the time, and I’m pretty proud of my skills.

And yet, she may be able to hold two half-pints at the same time…

What I read into this is that Jess is one of those folks who try just a tiny bit too hard at being larger than life. It’s an interesting dynamic with Jo, who I suspect, if she were to be released from her inhibitions, really is a bit larger than life.

I thought Jess was once called “pretty tall for a woman” and I thought she was 5’11” ish, which shows up when she stands next to Nina.

How tall is Jess actually?

One would have to hate fun to blame Jo for at least hankering for some simultaneous Jess-Evrina nookie.

I’m curious whether it’s purely sexual or if she just wants to be able to love everyone. I’m also curious if it’s possible she thinks it’s the former because she doesn’t yet realize it’s possible for the latter to exist.

I love the way Brooksie’s smile widens in the last panel.

Black Hole quote! I love it!

Jess is such a great character, she’s a lot like what I would imagine Thomas would be like -if he recognized his own competence.

Man, I’m with you; Arrested Development was some great stuff. One of the most quotable shows since Mystery Science Theater. From “light treason” to “Annyong!”, it was packed with great stuff.

The only disappointing part is that it never wrapped up all its loose ends. I was looking for George Michael to end up sharing a cell with Pop-Pop by the end there. Now it probably won’t happen.

…I demand to be taken seriously….

With holographic avatars and on the fly photoshopping of video [whatever they call it now] The studios are not that far from giving you your favourite actors in new episodes long after they have exited stage left, or burned out from overindulgence of debilitating substances [alcohol et al]

I’m still looking forward to an Action Flick starring a young Sylvester Stallone and Humphrey Bogart in his prime.

I think Jess MIGHT be open to it as long as the situation does not involve her brother in some way. That’s probably a little too Lannister-ish for her tastes…

Jessica Walter had a great voice acting career too. Her not being Mallory Archer is the biggest blow to that show.

Her pure talent to display snark even in her voice was monumental. You could see the snark in Arrested Development (which is why I loved her character) but her voice was so spot on for snark.

She will be greatly missed.

With that being said, it makes me think Jo is the cheating type, as that’s been my experience with all like that.

Of course, she’s fictional, so doesn’t have to go that route, but all those looking for multiple people to love, find them, even if they’re with people who don’t want it.

It’s not cheating if she never promises, not even implicitly, to be faithful.

This is true. That doesn’t mean she’s not the cheating type and just because she’s nice a fave character doesn’t mean she can’t be, and seeing as how she’s being set up to be shown as wanting multiple people, point still stands that when dating, that type I’ve seen, cheat :p

But again, she can be written not to be.