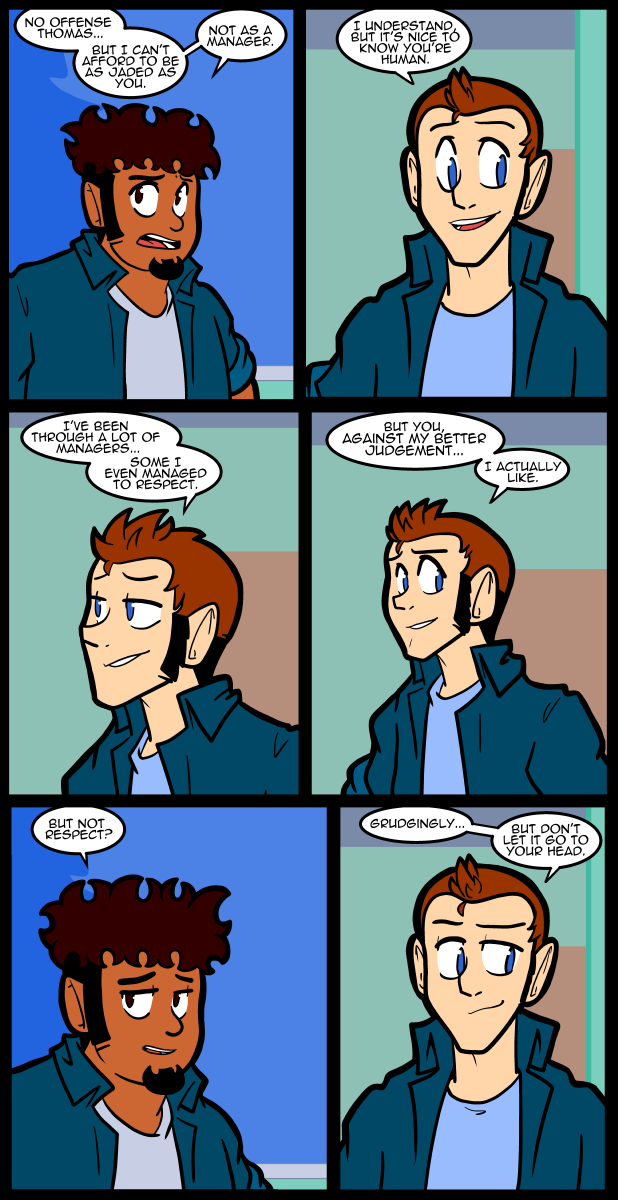 It’s snowing, which means that the power could go out at any time. In any case, I’m uploading the comic sans post right now just in case. If this is the only text you see when posting time comes you’ll know that the power is out & I am freezing to death. All I ask is you remember me not as I was, but as a much better version that you tell people about at length, so I can have the fame in death I never achieved in life.

I went ahead and got Undertale. Haven’t played a lot, but after I figured out what the hell was going on I enjoyed it. I can’t remember any game ever actually making me laugh genuinely. It’s very clever.

“comic sans” in your post jumped out at me and I imagined the comic in all comic sans.

“All I ask is you remember me not as I was, but as a much better version that you tell people about at length, so I can have the fame in death I never achieved in life.”

If you ever choke to death on gummy bears, I will tell everyone that you were killed by bears, and leave it at that.

What will you say, if he is killed by roosters? ;)

“Killed in a fight with modern day dinosaurs.”

I used comic sans for Thomas’s text for years because of people’s ridiculous aversion to that typeface.

I use it whenever possible for the superhero tabletop games I’m designing. Not for the rules, or anything like that — that would be ridiculous. But for captions and stuff, it’s the way to go!

Very clever is a great way to describe Undertale! It’s got a lot of laughs in it. And bad puns too.

Btw, there’s a typo on the first panel, when Mike says he can’t afford to be “a(s) jaded as you”, the S is missing on the first “as”!

In the first panel there’s a slight problem with the words. Not as jaded as you are. You have missed the s. Love your stuff btw.

Jackie Wohlenhaus was a major presence in all our lives. International bon vivant, writer, artist, developer, and periodic chicken fancier, he would deliver work that affected all our lives directly three times a week.

But don’t remember him by his art. Remember him instead by his legacy of improbable–some less charitable souls may say impossible–deeds. Remember the time he fought three bears over one single bowl of porridge? I’m not a hundred percent sure what porridge is, but I remember he fought like a wildcat for it. Those bears spent three weeks in intensive care after they got on Jackie’s bad side, and reminded us all that that was a place you didn’t want to be.

Or perhaps the time he promised his first-born son to a mystical dwarf in exchange for the ability to spin straw into gold. Sure, no one had a spinning wheel so the deal ended up being moot, but I heard Jackie walked away with a goose that laid golden eggs on that one. You can’t enforce a contract that’s a physical impossibility, after all, so contract law was definitely on his side that day. That dwarf had over three dozen lawyers, but Jackie took them all on and won. I hear that three of the lawyers ended up sharing a room in intensive care with the bears.

And then, in what ultimately killed him, he got in a chicken wing-eating contest with Brian Boitano. They say they’d never seen a man eat so many chicken wings, but there was one man who ate more. And it was the last thing he ever did.

Jackie Wohlenhaus: Bear fighter. Courtroom dramatist. Wing eater with eyes perhaps a little too big for his stomach. Oh, and he did a webcomic too. We will never forget you, sir. Requiescat in pace.

…wait, what do you MEAN I don’t need the fake obituary?

Yeah I wrote an obituary for Kjartan ‘Karno’ Arnórsson a while back when he was late posting because is Interwebz connection was down. He’s not dead yet…

Could you… you know… (hands over some coin)