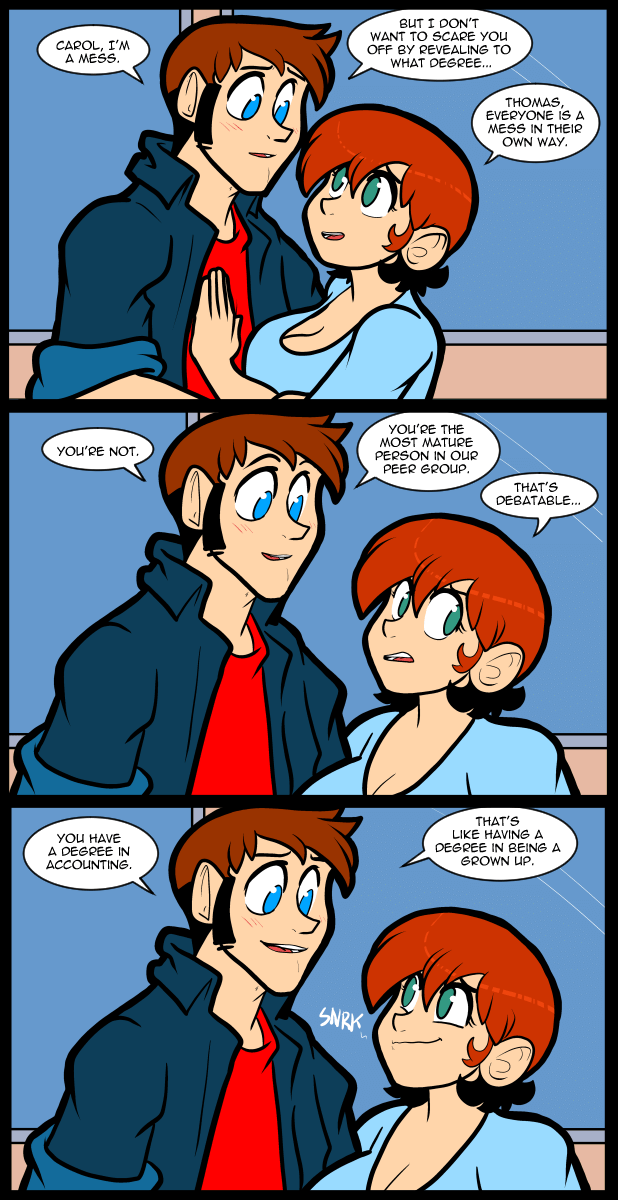 It’s never been an important plot point that Carol has a degree in accouting, but it has been mentioned in passing. Honestly, if Carol isn’t the most mature member of their peer groups she’s in the top 3 at least. She’s more mature than a lot of people I know who are much older than me. Of course maturity and age often get conflated. If nothing else Carol is the more mature of the two of them & Thomas is self aware enough to recognize that much at least.

Lol I have multiple degrees in accounting and let me tell you – that master’s doesn’t make you an adult. Just a lot of drinking to fit in and screwing around. ?

My experience with many folks from many varying degrees is this: from biology to computer science, masters, doctorate, etc., the tougher the degree the more drinking and hanging out involved. It’s a matter of stress relief, generally, and by no means a strict rule or anything.

Tho hardship is a part of growing up, some of us have to grow up faster than others..

The amount of drinking and hanging around that went into my BA was excessive, IMO. Kinda makes me glad I didn’t go for an advanced degree.

Is there a degree in drinking and hanging out?

Hanging out is an important part of the university process. It’s time to discuss what you are learning and mentally integrate it into one’s life. The drinking lubricates hanging out, but it does not have to be alcohol. Coffee, soft drinks, and milkshakes also work.

In the time of covid, hanging out is sadly restricted.

we’re all a pile of fuck up, some are just better at hiding it than others

For a little while at university I was in a relationship with a woman who was studying accountancy, and who was incidentally as mad as a cut snake, who for some reason got irritated when I quoted the Monty Python vox pop “Well, I’m an accountant, and consequently too boring to be of interest”.

“Mad as a cut snake”; it’s been a year since I heard that one used.

I’ve never heard that expression. Madder than a wombat with a bent pickax is my go-to. But then I’m a Digger-mousie fanboy.

My grandfather used to say “Madder than a football bat”

loopier than a hula hoop factory, nervous as a long tailed cat in a room full of rocking chairs,better than a poke in the eye with a sharp stick, busier than a one armed paper hanger……nuttier than a fruitcake-fruitier than a nutcake…

My personal favourite is “useless as a chocolate teapot”.

Not about acting mad aka insane, but I’ve always liked the phrase-
“[that person is]…dumber than a bag of hammers!”

Evidently she was not too boring to be of interest.

Thomas’ blush was well-earned. As was Carol in the last panel.

BTW This seems to be a different kind of blush from Thomas. I could be wrong, but his others are either affection / nuzzling related.

Just speaking to that accounting degree and adulting…

My best friend in college worked his ass off to graduate with a double major, Business and Accounting, with a minor in Computer Science.

After graduation he did a turn in the Navy, then came out and decided NOT to get his CPA certification.

Accountants are all assholes.

So what did he end upbdoing instead. He just *might* have become an accountant who wasn’t an asshole.

That *is* what I suggested…

But, no. He’s been a short-range delivery driver for the past 20 years.
One could say that his degree was wasted.

But who am I to cast aspersions… He bought a house on his own credit and paid it off ten years early.

I’m a mess, to some degree.
Is your degree good enough, to help with my degree?

LOL! I snerked, then I realized Carol snerked. It was great! XD