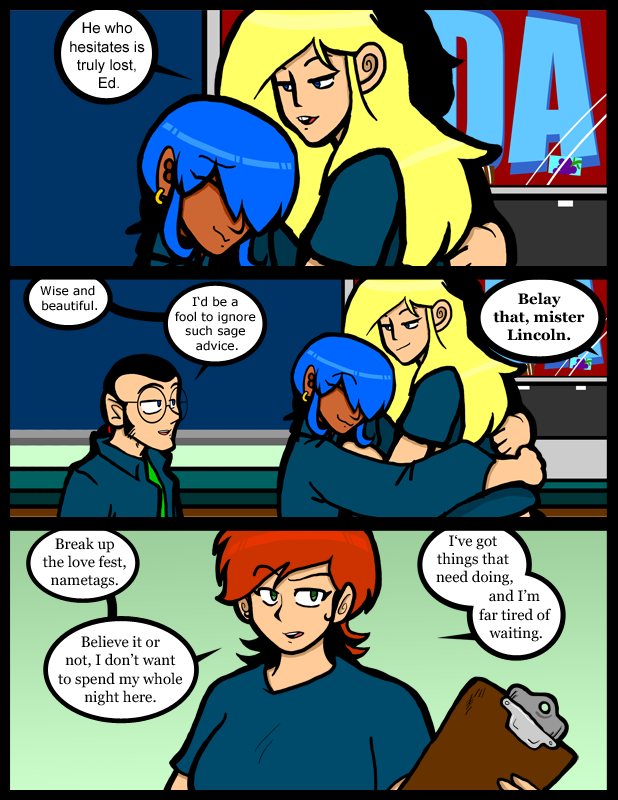 I finished Battalion Wars, for the Gamecube, the other night.  It was an alright game.  I might try the sequel when they consign it to the cheap crap bin.  I preordered Battalion Wars when they first announced it.  It was originally presented as being part of the Advance Wars series, which I love.  When it was revealed that it was going to be real time tactics I was dissapointed, but decided to give it a chance.  I played it once, for about 30 minutes, put it back in its box, and left it alone for 3 years.  A lot of games I own have similar stories.

I love how she just comes in and kills the mood…

The dialogue is great as usual! And I love Carol’s in particular. Specially the “Belay that,” makes me think of Barbosa

Brooks got huge arms like an orang… when she actually takes them outta her sleeves.

Those aren’t her arms… They’re too light colored.

Those are John’s arms wrapped around her. Brooksie’s arms are still in her sleeves.

Hahahah Barbosa xD
Nina looks even more beautiful with her.. Hair cut? The design is a little different from before xD

Carol has things that need doing… like, oohhhhhh, Tom?

Carol and Thomas would be smart to tell the staff that they trust their secret and then they would have some people covering their backs.
That is what friends are for, making sure that if you stuff up then you don’t get caught!!

Carol wants to get the heck out of Bartertown as quick as possible so she can start doing things… like Thomas.

The ‘nametags’ reference, was it a Scrubs reference? Not sure where in the series that reference falls…