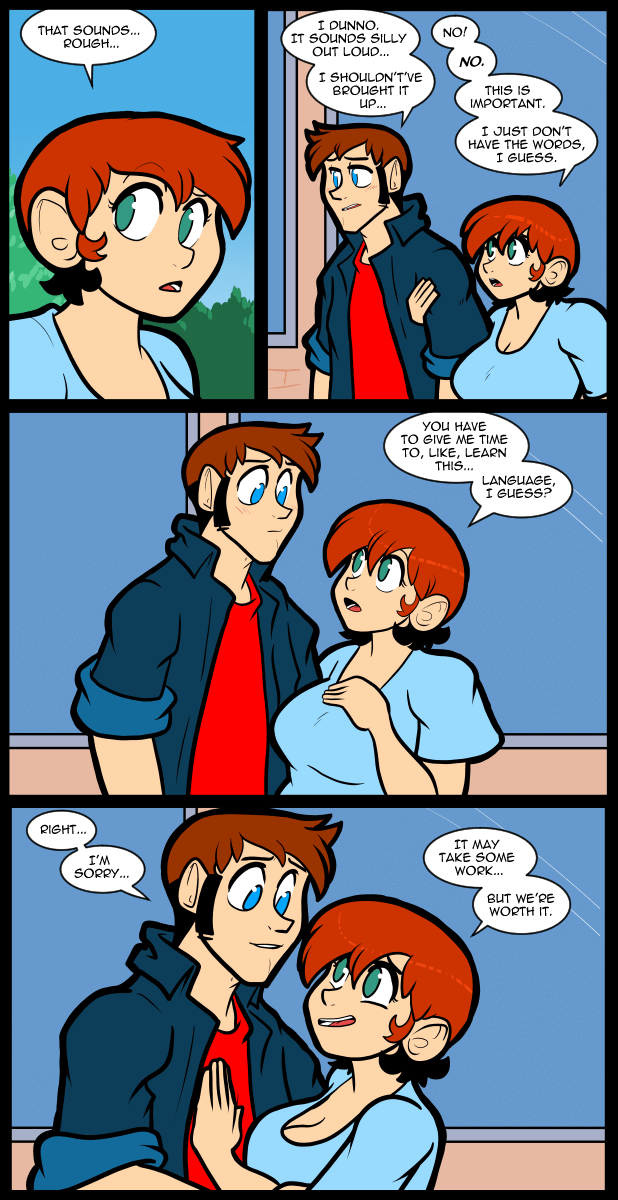 I wrote this a bunch of times because I kept explaining too much. I cut down the words over & over until I had the absolute minimum required, as far as I could tell. Carol isn’t stupid, but she’s also not a wordy as he is. I have to be careful when I write Thomas because he essentially uses my voice & it makes me let my guard down & start making everyone on the page wordy too. Although you need to let that happen a little because any group of friends will begin to resonate with each other, but you need to walk the line carefully. When I was little my mother & father had very distinct “voices” linguistically. He is from Iowa, his mother was a teacher, so he spoke very precisely. My mother spoke with a very casual Kansas accent. Over time our family ended up with a very precise version of a kansas accent as the two styles melded. We’ve always leaned toward the precise though, probably because my father is a very strong willed, dominant, person so his style teneded to win out.
Amusingly however, my mother still has a few Kansan things in her dialect that have never quite been scrubbed away, like saying warsh instead of wash. It’s not even all the time. It’s more noticable after she’s been around her parents for a few days because they still maintain the more casual dialect. All that said, my maternal gandparents do speak with a much more clear version of a kansas accent then what you might find further south, or in the little rural towns on the edges of civilization. It’s not like they were hillbillies or something. They used to sad pop instead of soda, but over time soda made a lot of headway. So now at a gathering your chances of being handed a soda are about 70 30 over getting handed a pop.

Yeah, but which word you use can indicate what part of the country you are from.

I’ve heard in the Southeast they call any soda coke.

Apparently so, based on this several hundred thousand responses mapped out here: http://popvssoda.com/

Yeah, still do that, and I’m initially confused when they don’t ask me what kind of coke I want in the drive through, then realize I’ve just ordered a”Coke” instead of a Dr. Pepper. I drink it as masochistic punishment for stupidity. Also, my family has always said “kiff” for baby cow. Gets some funny looks.(rural area, comes up more often than you might think…)

…The last time I asked for the [clear coke], the cops tapped me on the shoulder, + I got arrested!

How would you order a Mountain Dew?

You say “and for the Coke, I’d like Mountain Dew”. See, that makes perfect sense!

Except, of course, in places where they call “Mountain Dew” “Swamp Coke”. Adjust as needed.

It’s just that last sentence makes it seem like there’s two drinks at the gathering, one called pop and the other soda. lol

A rose by any other name, …

Another argument that you can get into is:
do you eat a submarine sandwich, or a grinder, or a hero, or a…

Or a torpedo — that’s what my Dad called them when he moved to Connecticut in the early 1950s. When I was a kid they made them with cabbage and oil and vinegar.

Thanks for the grinder-type ideas, everyone. :D

When I was a kid in the 1960s, if you asked for a ‘soda’ in the Boston area, you would be served a plain seltzer. Asking for ‘pop’ would get you a funny look.

Yeah, wasn’t your Dad with you?

I’ve spent years tempering my northern English accent. But soon as I’m drunk or angry it all goes to pot. Especially when angry.

Best beloved is from the Midlands and was living outside Newcastle when we met. She can go full Geordie when necessary. (I’m from California, we met in Prague, and now live near The Hague. Complex.)

It is indeed grim, though…
https://www.youtube.com/watch?v=oSGS2Jvq3RQ

Jackie, look for the other half of December’s $$ coming in.

It’s weird, I grew up calling it “pop” all the time, but somehow I got it into my head that pop is the informal word while soda is the formal word. Ultimately I began to think pop just sounded weird, so I began to use soda all the time because it means the same thing and sounds better. Now I always say soda, which is odd because the rest of my family still always says pop, and now it sounds strange to me when they do so… (For reference, I’m from Ohio.)

I grew up calling it pop, but understanding (and sometimes calling it) also soda and sodapop. What erks me is ordering a Coke and being handed pepsi. They aren’t the same. And if Coke isn’t available I want a Dr Pepper damnit!

Grew up with the Pacific Northwest to the south of me. The midwest was to the east, the fareast to the west, and most depictions of the great white north being set or filmed further south while for me it was usually only raining out.

Actually, curious here, if everything in the deep south is a coke, how do you order a Coke?

When you order a coke, the wait staff asks you what kind, and then you specify. Actually, that’s a weird thing to me since the deep southern accent is full of lazy things.

I word I seldom hear is “youins” My maternal grandmother used it the same way that a Texan says Ya’ll. Enjoying the comic and commentary above as it touches on both regional differences in communication and the internal dialect of families.

In Pittsburgh, that’s “yinz.” They also warsh stuff. I grew up in the interridge uplands southeast of Pittsburgh, and my grandparents drank pop.

I learned proper speech as a kid from the Ultimate Authority–television. :)

This is the most wifeable Carol has ever been, and she’s been wifeable plenty of times.

I like your word wifeable and I will have to start using it on my wife.

If she’s your wife, she ain’t wifeable any more. She’s already been wifed.

Reaffirming what I said earlier about liking the way you were going with this as someone with bipolar themselves, this was an awesome sequence and a great way to show a healthy relationship with a partner who’s willing and able to try to understand.

As a Texan, I can confirm that all carbonated soft drinks are cokes, but a Sprite is a sprite, not a clear coke. We have subs, especially now that Grindr exists.

Thanks for the info.
Grindr?…hm-
just as long as they don’t make a dating site, named, Kielbasa!
That would be embarrassing-

I think that it’s great that Carol wants to support Thomas while he works with his issue.

Probably like helping someone with any other medical issue- emotional support, + any other support, can mean a lot.