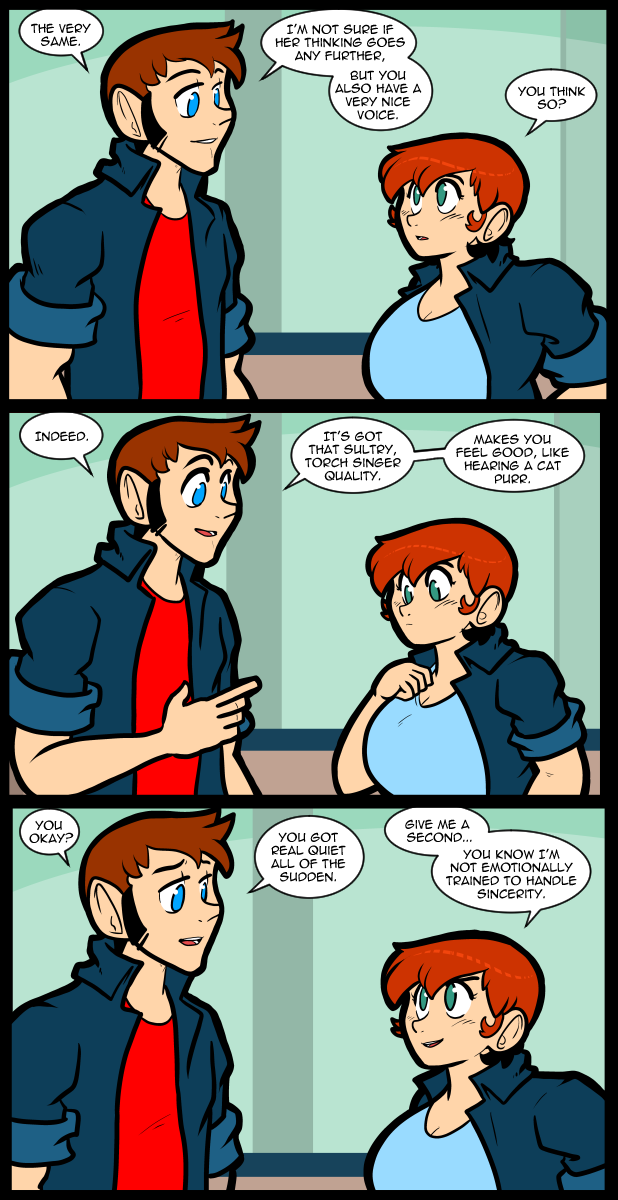 The voices of the characters are something that I know in my own head, but I’m sure that they are different in yours, dear reader. I think Carol’s voice has been mentioned a few times as being good, and she sings on a couple of occasions, but I’ve never really nailed down exactly what she sounds like in my head. The page title is a clue for anyone who cares enough to go looking. It actually took me years to figure out who I was thinking of when I thought of these particular renditions of torch songs. Having heard them with no artist name given I just had to guess & hope I might get lucky. Eventually I did & I realized that Julie London was the voice I had been remembering. A more modern similar type would be Kathleen Turner, although she didn’t do any singing as far as I know. Amy Irving is similar, but a little higher pitched than what I think of. Very similar though. The last two names were, of course, the two voices of Jessica Rabbit in Who Framed Roger Rabbit, but I don’t hear Carol’s voice as that perpetually sexy voice, but as the regular speaking voice as heard in Romancing The Stone. A voice capable of making a witty comeback venomous.

Of course her voice in my head isn’t exactly any of these, they’re just as close as I can find as examples. Because I read all the character’s in my head with the tone, in some odd way, of my own voice. My inside head voice, not my out loud voice. Which are different. My actual speaking voice has kind of a nasal almost lisp & an accent, but my head voice doesn’t. Probably because it doesn’t require me to breathe.

Have you started drawing Carol’s head differently? Like on 2244, panel 1 looks like your normal style for her but the other panels her head looks more compacted and not as curved and detailed as in previous comics. Looks the same in this current comic.

Even on a good day my art is inconsistent. I just draw how I draw and hope for the best.

Sorry. I know you do your best. Normally I don’t notice it but it just had a significant enough change that I thought you were trying a new style.

From my perspective I fucked up the angle on the first image you mentioned & every one after that was on an angle I could manage. XD

Doing your best is fine and admirable. A slow shift in the way you draw a character is understandable. A gradual move toward them all looking the same just with different hair color is anime. Last, if you just draw an average body and plop an approximate head on… well that’s just lazy.

Sorta Carol is still Carol just not the Carol we know and at some point you eye starts to get you brain wondering, is this Carol? One starts to wonder more if the change means something…

A theme you have recently touched on with the general “embiggening” of a few of them – just saying. Love subtle art clues so long as they are intentional, so please don’t retcon sloppy art cause we will start to second guess.

I just thought she had a different hairstyle, today.

I really identify with the “inside voice” thing. I have voices for all the characters, but I can only make them in my head. I do think Julie London sounds like my rendition of Carol, though it sounds a bit off to me for some reason.

Probably a lot of reverb in your mind. Need to put up some acoustic foam.

The inside is wet, I can’t get the foam to stay up where I put it. Gonna try nails next.

I’m voting for marielle matteau, or Barbara (who sang postwar song “Goettingen” for her voice.

I think that Carol’s voice is like Daisy’s voice, from the 1980s show- the Dukes of Hazard,…well, without the [Southern?] accent, + with a more Kansas-like…or Midwestern-like, accent.

(Yes, sometimes I watch the easy-on-your-mind stuff, sometimes. Don’t look at me like that!) :D

FYI, Kathleen Turner supplied the voice for Jessica Rabbit. No mistaking the voice once you compare the two.

She isn’t bad, she was just drawn that way.

I have imagined Carol’s voice as a warm liquid alto with enough power to easily go full Drill Sargeant when needed, and it’s her voice which actually commands the initial “attention”. The rest of the package is just a bonus.

I don’t know about the last sentence, but I’m certainly in agreement with your first idea.

I can imagine the Jessica Rabbit a bit. In my mind I thought Carol sounded like Katey Segal – sort of right up the middle with a basic warm tone with just a few cute high chirps that show she is lighthearted despite a tougher exterior.
Listen to Leela on Futurama where she uses her basic voice “just higher”.
https://www.youtube.com/watch?v=mqYxoEJUM6k
Oddly, Katey sings in the lower half of her voice as she has less control at higher notes due to age and a rough life.

Hmm, I have always mentally heard her voice as being like Bernadette Peters for some reason.

Not surprising, really. Carol’s a big gal. That implies larger lungs. The massive tracts of land likely give her more substantial pecs as well to hold them in place. All of this contributes to vocal quality, last I knew, so with a little practice–and you’d be surprised how little it might actually take, like singing at church a couple times a month–and you can probably develop quite a voice.

Now I am wondering, how much do people’s internal monologs have an accent? I read fast enough that unless it is spelled out, accents get compressed and I don’t notice them so much. It’s largely the same with my thoughts unless I am doing something that slows me down, like typing. If I run my internal monolog at normal speaking speed I start to pick up the Texan twang. Dang, now I’m going to have to go back and read the “Laundry Files” novels in a British accent.

One of the things that I am is a musician. I recently learned (within the last decade) Cry Me A River written by Arthur Hamilton and first released by Julie London in 1955. I will from now on use Ms. London’s voice for Carol’s.

The only one I remember you saying off the top of my head is that Nina sounds like Mrs. Brisby.

…I know the voices in my head aren’t real…but they have some fascinating ideas…….I live in my own little world, but its okay. They know me here…

I’ve always thought all the female voices in this strip were low-pitched. Probably because I find it sexy.