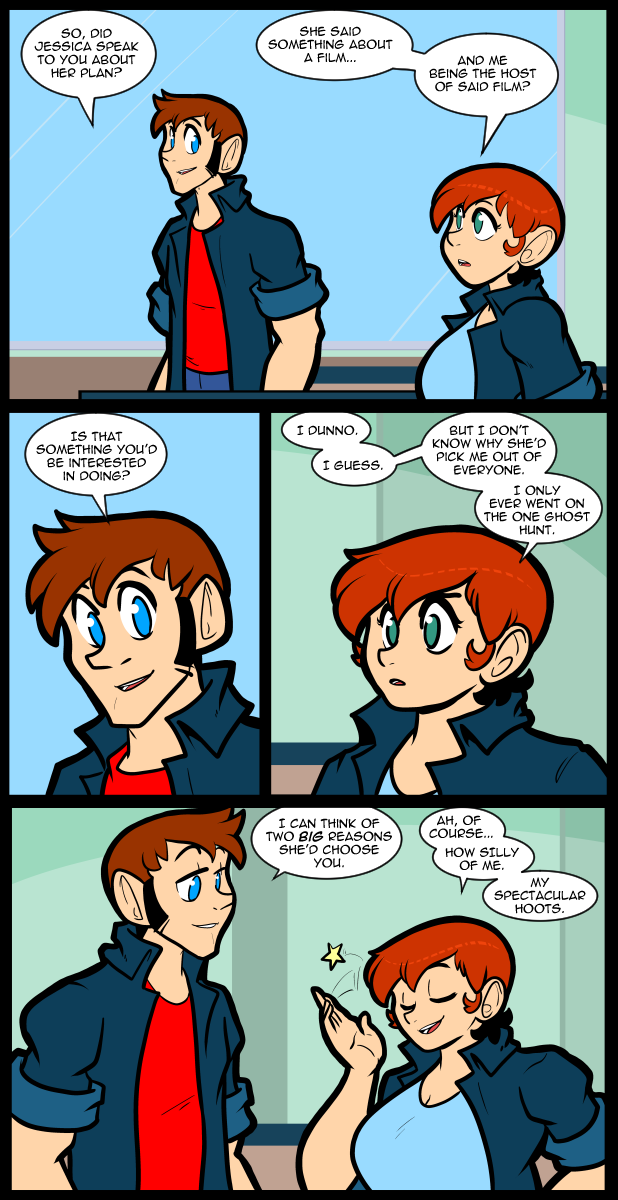 When I wrote this originally the last line that popped into my head was a meme. It was funny & all but a bit much for the actual comic. It would also have been anachronistic, although that doesn’t bother me all that much. Anyway, it had to show someone so I took it to the discord to show my most ardent supporters. Sometimes you just need someone to see an idea even if you aren’t going to use it. In any case I chose to use this as an opportunity to introduce the hoots meme from the discord into the comic, although not in it’s pure form yet. I don’t know why it amuses me so much but it does.

The blog post is out of chronological order. I wrote this part first but some people don’t really give a shit about my personal stuff, so I decided to stick it under the comic relevant part of the post. This was actually written in stages, over time, as I did various things. I think you’ll figure out the order easily if you care to. It’s probably not worth the effort though.

Laid down for a while & am feeling better. I’m pretty sure I got that pinched nerve in my back that makes me nauseous. It hasn’t happened in a while, but every so often I get super sick really quick & it goes away if I lay down for a bit to stretch my back out. Anyway, I’m a little queasy yet but mostly fine.

Carol is a gem and must be protected xD love the hilarious moment of self realization.

Do feel better soon. I always care about your personal life Jackie; can’t believe you remember mine…

So Jessica asked her cos she thought she’s the breast choice?

*TRA slaps his own forehead*
Arrrrg!

If they ever make a set of crown jewels, made of amazing puns, that will be ONE of them! :D

Let us raise our cups in salute.

Nope.
Not gonna say it.
Thought it, but not going to say it.

Her beautiful face doesn’t hurt either!

Boobs, tittens, tatas, meh, Carol is the sum total of her parts, the whole package, and she’s the shizz!
I hope yer doing better. I’m calling this the year that went sideways. Even the healthy folks (non-covid) are getting odd stuff. I’m keeping mah head down, staying in mah traces, hands on the plow, my nose to the grindstone, my chin up, my shoulder to the wheel, … and trying to work like that is a pain in the neck.

Mostly glad to hear you’re doing mostly better! My aunt is an insufferable know-it-all but one thing she said does stick with me; you know your own body better than anyone. So when something familiar comes up, stick to the treatments you know work.

Oh, and on another note, what exactly WAS that meme that should have been in there? I could think of a few possibilities but I’d like to know just WHICH one was intended.

For those of us who don’t make the trip into Discordia, that is.

https://www.youtube.com/watch?v=rZ_wNdYgP3w
This one has the subtitle “in hoots we trust”.

Ah, to be in cahoots wit dem hoots…

To the tune of- “Hooch”, by Everything:

You got the HOOTS, Baby!

Let’s get real, let’s get heavy…
Till the water breaks the levee!
Let’s get loose! Loose!
YOU got the hoots!

Panel 3 is incredibly cute. On another note, your malady sounds a lot like mine when I had terrible recurring kidney infections. It often felt like a backache. I could go from fine to puking and doubled over, fetal position in a matter of minutes. They fixed it. By removing the kidney. Maybe you want to get it checked out.

Puts a different meaning to this song, haha.
https://youtu.be/BkUAzcja74Y