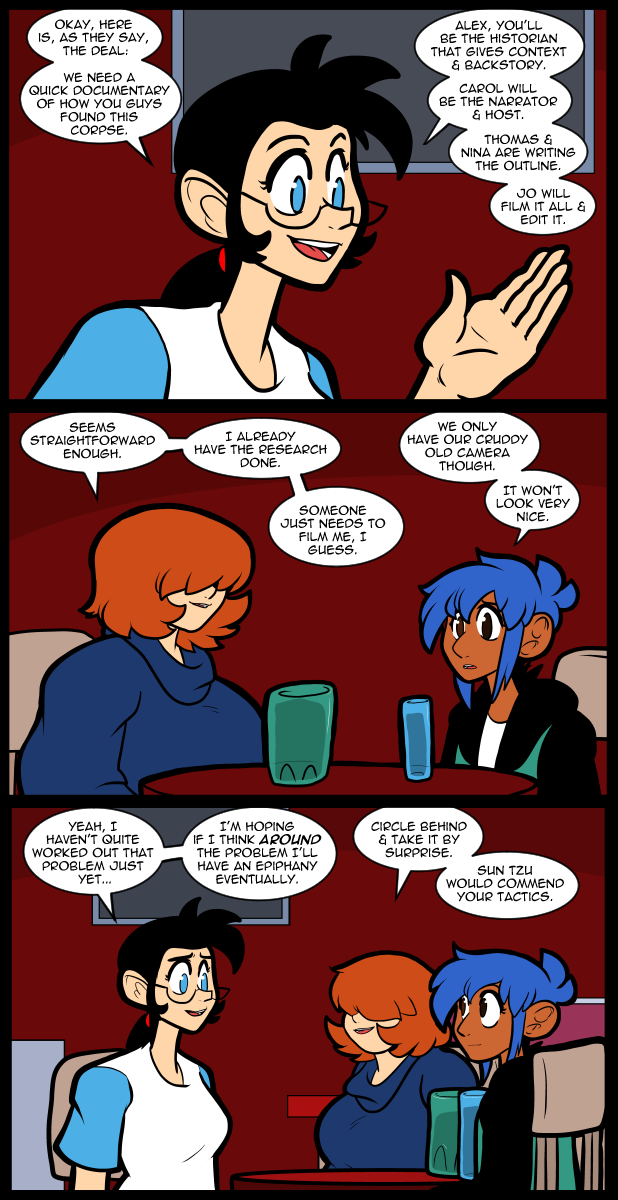 Do you ever get overwhelmed to the point that you just can’t focus on anything? I’m there at the moment & I know what to do to stop it, but I’m kind of basking in it for a minute. The trick is to ignore the totality of what you need to do & just focus on the thing you can do right now. It sounds simple, but it’s a skill. You have to learn to be able to do it. It took me years to train myself to be able to face my problems, or commitments, or whatever, with this mindset of “do what I can now & worry about the rest later”. My dad had turned this into a fucking art. He can be standing in the middle of a total disaster like some kind of zen master. When he’s done all he can do in a day he just sits down in his chair & goes to sleep. At some point in his life he learned to just turn the worry part of his brain off when it’s time to rest. I’m not there yet. I have to trick myself into it, but it’s a goal. I know if I could learn to do it I could work that much harder because I would be rested every time I started.

When I was little there wasn’t quite so much emphasis on every action having a monetary purpose, but now it seems like everything people do is considered pointless unless you can make money doing it. The internet even made it possible to monetize out leisure time. I expect that’s probably a lot more unhealthy than we realize. But that’s just the world now. At least until something changes.

I’m sure there’s an obvious quack I should make about your title, but bent over like this it seems to have flown overhead rather than landing in my head …

Re: your question — almost constantly and I seem to be getting worse about ably addressing anxiety and achieving anything at all :-(

I was going to make a barba Streisand joke but then i remembered its duck sause not duck soup.

I’d leave a reply, but I’m afraid that you would give me the bird.

Nope your safe — I don’t do twitter. In totally unrelated news I’m also unlikely to fly into a rage and try to tar-and-feather you.

Good to know!
Thanks.
Sometimes I worry about the raven lunatics.

Long time reader, rare commenter. Your description of your dad’s efficient energy and how you have tried to emulate it hits home for me. I’ve never been able to capture that lightning and have a hard time not thinking about the “totality” of a project or situation, as you said. My question for you is, how do you personally strive to achieve this? Where do you even start? I’m so distracted and scattered these days I can’t stand it.

Also I love your comic. Your character development and consistency is unparalleled.

My best suggestion is to focus on some part of the problem, the smaller and simpler the better. Look for something specific than you can do/fix, and tackle that. If you can achieve some specific task, that may help to boost your confidence as you move on to the next. Even the most complex problems can become simple if you break them down enough.

I think of the three most important to get done, and do the first one, start on the second. … if that gets done: Hurrah! Then I can start in the third. There is rarely time for the third.

Hold on, there! There are comics that are parallel with Between Failures, they’re just not as good.
Or as consistent in posting. Jackie sets a pretty high bar.

I’m glad you appreciate my efforts. Thanks for reading.
As far as the other thing goes I just make myself focus with sheer force of will. Pure stubbornness. That’s actually how I combat depression now too. I redirect my natural stubbornness to not letting myself think in a destructive way. Keep my brain off balance with stimulus.
When I need to do a lot of stuff I just keep my mind on the smallest achievable steps as much as I can. As my mind drifts I distract it with stuff to disrupt the worry thinking. Eventually you get done and your brain doesn’t have to waste energy. Over time it learns not to bother. It sounds simple but actually doing it is the tricky bit.

One way is to acknowledge the actions in your head by writing them down adding a reminder or habit. This way you’ve worked on each problem a bit and can be confident you’ll tackle in time. You can partition a section of your brain for it, but I find using externalized ‘memory’ more relaxing.

Speaking of externalizing your mind. Money helps you make decisions, that’s it’s allure. However it’s only as helpful as the collective idiocy of the people using it, as the value is based on their joint selling/buying decisions, with part of the thinking outsourced to money. So it’s likely not very smart. The real problem is when people believe it is smart enough to make decisions for you and overlook that the absolute value available for distribution that you can get for money is currently shrinking fast… So in a larger frame, trusting in it is nonsense, but in a mid day-to-day frame one still depends on our compatriots’ beliefs about money.

The trick with money is that it doesn’t really exist. Even precious metals have value only because of societal agreement that they do.

Isn’t much of new technology over the ages promoted as creating more leisure time? Yet, it’s just used to make money faster than before. And we have another generation in a hamster wheel of making money and not just making enough to live life.

I wonder if the documentary crew will end up having the father-son follow up investigation as a bonus chapter of the special edition blu-ray.

the selection of shows for TV-

There’s a reason why they call it PROGRAMMING!

“I see on the horizon the results of people making choices to use technology to keep tabs on us all.”

Yes, I do feel that. Holy cow, is it hard right now.

I am freaking out.

If somebody wanted to be a Christmas elf, ya know hypothetically, and possibly by you something on the inconspicuous wishlist, how about should one do it, ya know, hypothetically?

I can’t tell if you’re doing a bit, or something else, because I’m so tired right now. If you mean the holiday list I add at this time of year in the link dump I think you just order it and send it as a gift. There used to be a process but I haven’t actually kept up with how it works. It’s better if you have Prime for the free shipping.

There has been something bugging me for some time now. Is finding a dead guy in a secret room that big a deal to people? I get this story takes place in nowhere u.s.a where nothing much goes on, and I can sort of understand the characters themselves feeling this way. Running into a corpse is a harrowing experience for sure, but to me that’s more a thing about corpses than the secret bunker the corpse was in.

However based on the comment by Jackie on 2239 that this story might be pushing suspension and the comments by the readers saying it was fine in a tone that implied it was pretty fantastic but not enough to break suspension. I have to ask if I’m the only one that finds the arc perfectly mundane?
not as mundane as checking my mail everyday but the sort of thing that shows up in a local paper and maybe gets news segment and then is forgotten by the next dog riding a skateboard. Certainly the man having a safe adds a level of sort of pirate treasuresque adventure flair but its hardly fantastic. More confusingly, having the grandfather be the architect is very reasonable. Picking the man who does construction work in this town, and from again the impression that this is small town, and from the only company in the town do the construction work seems so perfectly sensible to the point I would not have even thought about it until it was pointed out.

I really apologize if this comes out as harsh or as critique, because it isn’t and I absolute adore this comic and very much enjoy it’s writing, but the character’s continued attitude combined with the above is seriously making me doubt my own sensibilities and I’m genuinely asking if I’m simply the odd one out.

Everyone experiences the world in different ways. What is mundane to some may seem fantastic to many. The group reaction to something tends to err on the side of the majority. So, even though this all seems bland to you, to people who don’t have the same perspective it may seem unrealistic. I’ve been alive for almost half a century & have seen some shit, but I know how insulated people can be sometimes, so I take that into account. Early on I was regularly criticized over the details of Reggie’s aunt. It was labeled as unrealistic, in spite of it being one of the most grounded in truth aspects of the story, especially at that time.
Jessica is excited because she understands the opportunity a story like this presents. Urban exploration is one of the biggest subjects online. Combine that with paranormal research & you have a chance to gain a huge audience very quickly. It is in line with the goals she’s been espousing for quite some time. She’s excited & wants other people to be excited so they will want to help.

You should make a nsfw bothering incentive

Just out of curiosity, why did you change usernames & start saying you were “new”? You’ve been animufan, Yeet Potato, & anonymous now.

Some of those were my brother. Also, when I go to put in a username suggestions will pop up.