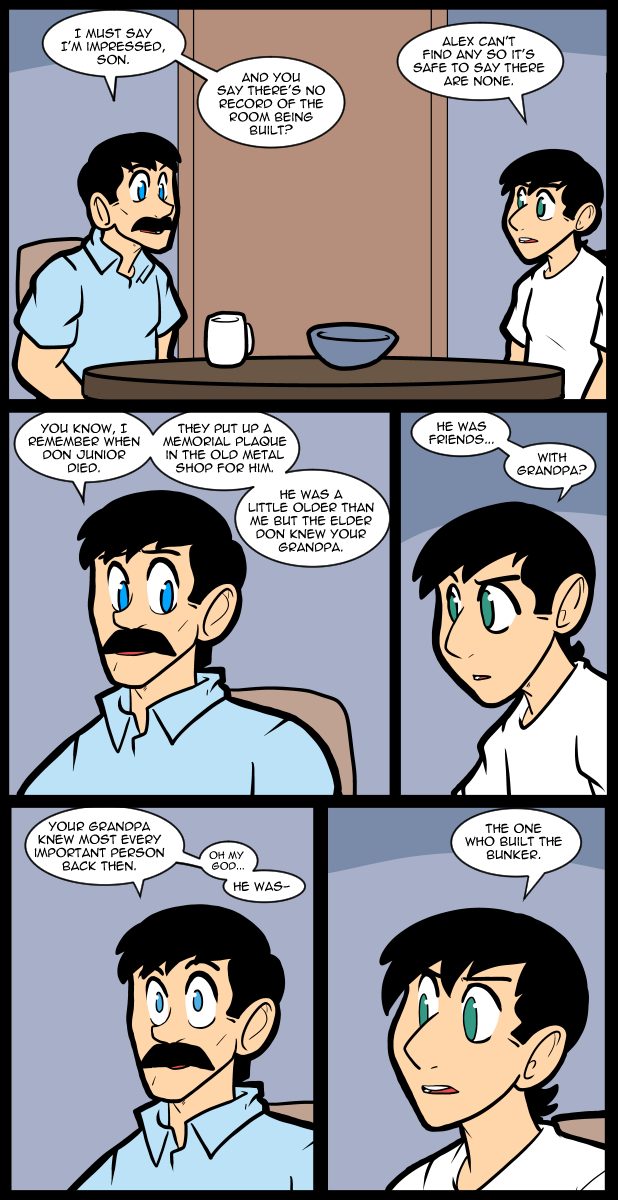 This was an idea I played around with as I was writing the bunker arc, but I wasn’t 100% sure I wanted to do it, which is part of why I started this part as a Patreon exclusive. I thought of some situations that it could lead to that I really liked, so I went ahead and pulled the trigger. Seeing as part of this is based on factual evidence of secret tunnels under a real hotel, among other things, I feel like suspending disbelief shouldn’t be too hard.

I love the way you built up to this! Combined with your well-constructed characters this cements your already firm place at the top of my favorites list.

That pun is as subtle as a brick to the head.

Dunno, it has me beaming.

It’s the capstone of my day.

Well darn, I seem to have missed out a marbleous pun thread …

Hoo boy.
That must be very hard for them, to look at this situation in a non-spooky way.
To realize that your Dad, or your Granddad, helped built a strange, hidden bunker, is probably quite a thing.

Were they violations of the code in effect when it was built?

I am inclined to believe the code violations are a result of improper upkeep after the original owner disappeared. No telling how long the place was empty.

More likely shoddy upgrades as tech advanced.. My grandfather wired my old house himself in 1939. Fuse boxes everywhere and single wire to ground.. In dry weather we were lucky to have a brownish glow from the lights. Oh by the way did I mention that it was not a Common Ground situation.. each item wired went straight to ground (a literal wire buried at each location. We finally got the house rewired in 2002. (Funny it burned down in 2013, after being brought up to code)

I wonder if the house would’ve lasted longer, without the town-demanded improvements.

Ah bullwinkle j moose. A legendary philosopher of his time.

Yay! Another fan of the Rocky + Bullwinkle shows!
:D

Very fun to take a virtual tour of the Winchester Mystery House.
Even more fun to tour it live, and up close, but not everyone gets out that way.
It’s got rooms, with windows you can see into a room, but the room has no door…. wha?
Or a staircase that goes up to … a blank wall? Lotsa’ mysteries there. No bodies, just a lotta crazy.

Fallout 4’s Nuka-World DLC has a similarly bizarre house, the Grandchester Mystery Manor. Similar architecture and possible haunting, the way only Fallout can do it.

Considering the fact that I have literally had to suspend disbelief over real life for the last 4 years. I am more than willing to do so for entertainment. Cheers.

The plot comes across as very plausible, especially in a small city. Grandpa might not have quite had a construction monopoly but it you wanted someone else you probably had to bring in someone from out of town. Early in the cold war it probably wouldn’t have been hard to sell your builder on the idea if tucking a private shelter into an out of the way corner.

My name is Gene C’Pause, and I second this….. wait, election season is over. Oooops..
Time to start cooking the lawyers and grinding out lawsuits.

Nice reveal! I have to wonder how Alex is going to respond to this when she hears about it from Reggie — or finds out about it herself in some other way.