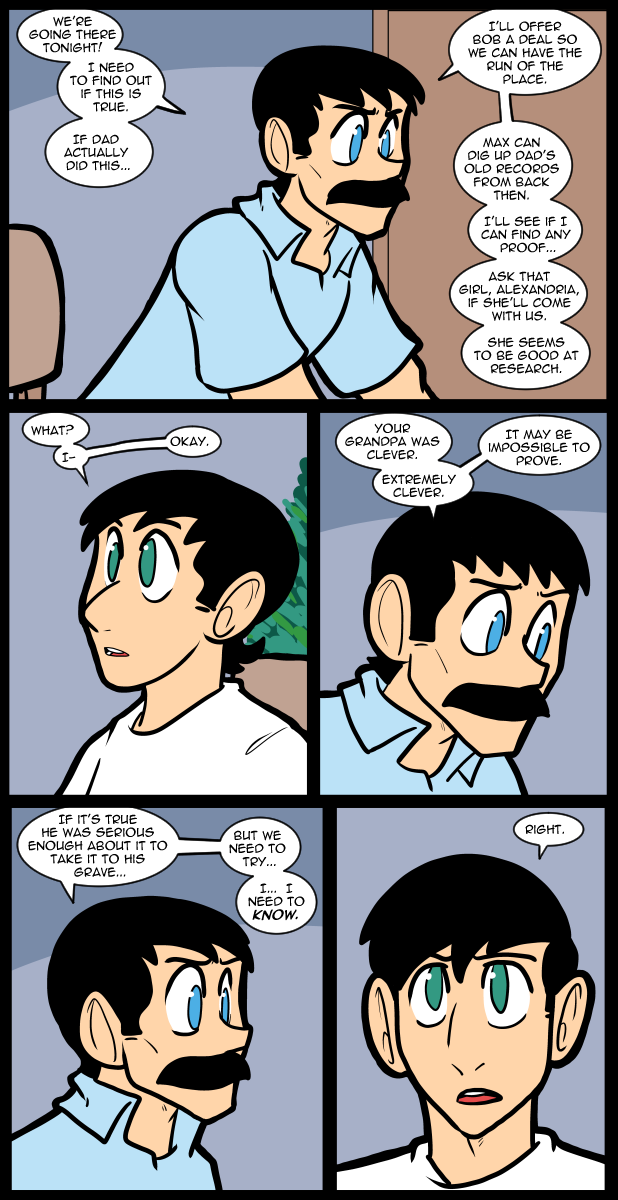 Amazing things happen, or get found, all the time. You kind of gloss over who did the hiding or the finding most of the time though. Like those kids who found T Rex bones in their backyard, or the man who invented the French fry container for McDonalds. We sort of gloss over the little amazing things that people do unless the person went to a lot of effort to make sure people knew who they were. You can probably only name one person who found a pharaoh’s tomb. Maybe two, but there have been many researchers who have gone largely uncredited by the general public. I couldn’t tell you who actually built the secret tunnels under the Windsor hotel. Or when they did it. No one can. It was probably a group of forgotten men. But at some point someone knew.
A lot of the time we get a figurehead for something, like Elon Musk. How much of Tesla did he actually DO? Did he mostly just pay for stuff & take the credit? I don’t know. I never thought about it until just now. I know that Jeff Bezos actually built Amazon at the beginning himself from the ground up. Sam Walton built Walmart up not on his own, but as the main driving force. He kept his hand on the wheel until he died.
In my fictional story a well connected man might have done this task that no one knew about for decades. Or maybe it was someone else & the Boothes are wrong in their guess. That’s how history gets lost. How we forget.

Wait, I’m sorry, I seem to have missed a story beat, why is it important to prove whether or not the Booth grandad built the bunker? Do they think gramps might have locked the guy in there?

Yeah I’m confused by the intensity of the response here too. The “grandpa built the bunker” thing seemed like an interesting realization and bit of family/local lore, not… an urgent thing that demands same day verification.

The Boothe family has been shown in the comic to care a great deal about history, particularly the history of their family and how it relates to the town. This situation basically allows for them to put out there a piece of missing history, which is why the father is so committed to it.

Critical thinking and pattern recognition are some of my few strong points. XD

If the Boothe grandpa built a secret bunker for one rich guy, maybe he built more?
And if they can find the record for this first one, they’ll know what to look for in their search for the others.

Possibly, but more importantly it may mean that the grandfather might have been involved with a lot more regarding the town’s inner workings that even his own family assumed. If that’s true, it gives his descendants a clue that could uncover even more.

Gonna bring along others who didn’t get to go the first time?

I confess that while I don’t think this turn in the story is BAD in any way, I certainly went from “very invested in a relatable situation” to “totally weirded out by irrational behavior”. It also seems a little contradictory; they are very concerned with their family and history, so they are going to disrespect grandpa’s obvious desire to keep a secret? Again, nothing wrong with it, I just don’t get it.

It’s been discovered. Someone’s gonna find out eventually. Better it be them than some random person.

At least this story doesn’t end in the death of all workers and a fire in the building print archives.

Is this a storyline from the comic I forgot about?

The Name of the Rose, Umberto Eco. A “literary” book. It’s been made into a movie, but as far as I know, not a comic.

Why the quotes around “literary”? I’ve read the book and it’s worthy of the designation.

Yes. It is worthy of the designation. The quotes are because I somewhat object to the use of the word in an elitist sense, perhaps because the quality science-fiction I loved back in the 1960’s has long been disparaged as trash.

I wanted to use it in an objective srnse to indicate that it was a book of text, as opposed, say, to a comic, which might have been assumed by freakedflower.

Perhaps I should have picked another word? Given the inability to edit these comments, I have to consider it all first-draft.

And just what is wrong with comics?

We follow the ‘one dude did it all’ for 3.5 reasons. The masses are dumb, the media is simplistic, corporate rules, and (kinda) fictional story structures.
The masses tend to remember only one person because… we are dumb. We can barely remember one name. If multiple people get remembered it is usually because they get lumped together like the Wright brothers (who incidentally don’t give credit to their meek old mentor bicycle repairman who did a ton of work). George Lucas created Star Wars all by himself with no help from his team of hundreds. That is why when he had a different team the Prequels were pure gold.
The media wants to have a simplistic story to fit a 1 paragraph summary. So Musk doing everything himself is an easy way to write a story to meet your deadline.
The way corporations work is that, usually, one dude (the boss) makes all the money. And because that dude made more money clearly they are the most important. And because the boss arranges the press briefings the media stories will of course revolve around them.
The way fictional stories are presented inadvertently affects how we perceive reality. And most stories have a singular main character (Spider Man) doing all the important stuff, and a bunch of random followers (And His Amazing Friends) who help but only exist because of the main character.

But in the case of business, it’s usually true. Guys who built cars in now-defunct car manufacturing companies worked just as hard as the guys who worked at companies that still exist. The difference was the guy, or few guys, at the top, who made the decisions; the ones who figured out which kind of car to make that people will want to buy, who made the deals as profitable as possible, who position the company to take advantage of opportunities. They don’t do everything, but they do have the biggest single impact, hence the biggest single compensation package. The opposite is also true; the “boss” is often immortalized for destroying a company, even when it might not have been his fault, or not entirely his fault anyway.

I love it. They started out this morning as two people on opposite sides of the room staring at each other over cereal, and now, they’re one team. Very nice.

Although far from taking mere interest in his son’s doings, Boothe Sr. is taking up the leadership role of his son’s project (down to delegating Reggie to assemble Alex*andra*), and it’s a worry.

Yeah, I noticed that as well. I just hope he doesn’t try to take all the credit for what his son and the others already did.

I can see this not ending well…

Musk bought into Telsa after it was founded. How much he’s contributed since then, and how much he just stood in front as a figurehead, is debatable.

“How much [Elon Musk has] contributed since then, and how much he just stood in front as a figurehead, is debatable.”

I’ve been following Tesla, and IMHO Elon Musk has done major significant things contributing to Tesla’s success. IMHO, his contribution is in seeing important things and getting everyone lined up in that direction. From what I can see, he is not an ideal leader, erring too much toward micromanagement; but he is right much more often than he is wrong and history will record him as a visionary.

Also, if you search for it, you can find the story of how Tesla very nearly went bankrupt and Musk managed to line up enough money to keep Tesla afloat just long enough to survive; that’s a very clear single incident where Musk personally made a critical difference.

If Elon Musk did nothing more than he did with Tesla he’d already be a legendary businessman, but he also founded SpaceX which at this point literally has the world’s best space technology. The secret of SpaceX’s success: Elon Musk said “Rockets must be reusable. All designs should lead to that end goal.” People sneered at Musk’s plan for rockets to land themselves after launches, and laughed when the first half-dozen attempts ended in wrecks; but now it’s routine for SpaceX rockets to land successfully and fly again. Nobody else has rockets like these.

IMHO Musk is more worthy of respect than Steve Jobs. Steve Jobs also was right more often than he was wrong, and made some big decisions that had far-reaching impacts; but Steve Jobs was not a very nice person and from what I can see Elon Musk is, overall. (Musk has said some regrettable things at times, but even so.)

What credit do you give Steve Jobs for the founding of Apple when Steve Wozniac had the technical expertise? Visionaries matter.

What we do know, thanks to his court case, is that we can call him a pedo guy without any comeback :D

Minor correction: it wasn’t a joke. It was never a joke. It was a manchild lashing out at someone who not only succeeded at looking better than Musk, but dared to criticize Musk in the process.

Not that anybody’s paying attention, … I’m certainly not.
But perhaps some ot the Booth history leads back to teh cemetery, a couple of arcs back. Not saying it will, just saying there’s a lot of loose threads to burn.

Candle wicks, candle wick to burn! That’s what I meant, sure….
Sure, … Let’s stick with that.

Jessica will definitely want in on this. /comics1/2190-documental