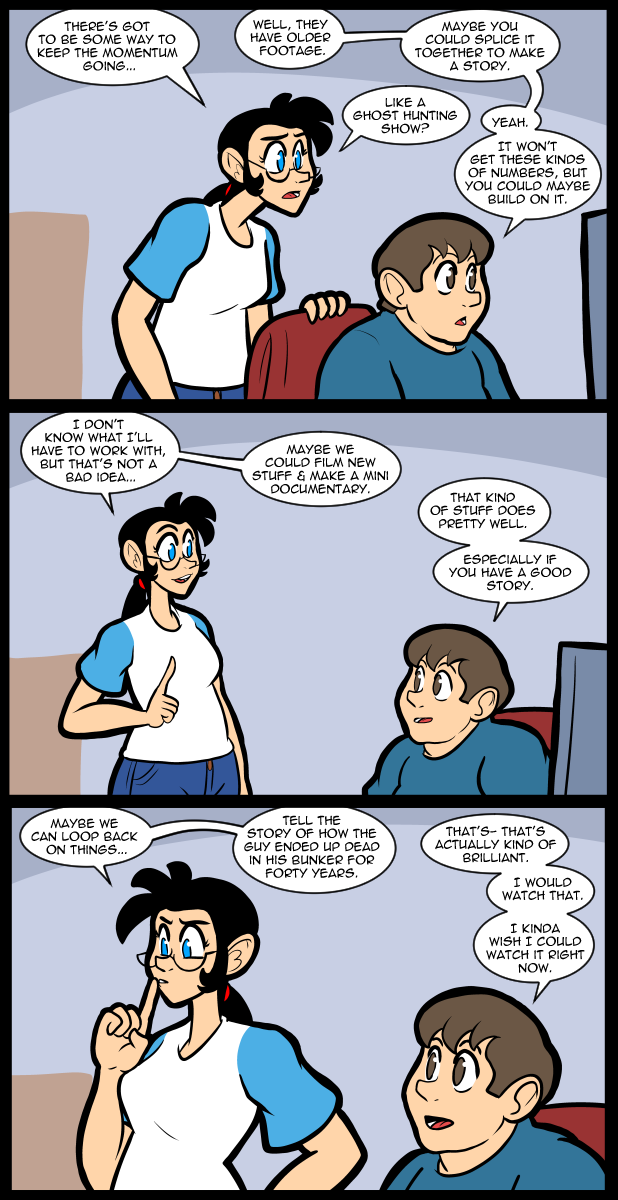 I’ve watched a lot of documentary content online. Defunctland is one of my favorite series. It’s actually better than the stuff Disney produces about itself. It’s very difficult to carve out a path online & the ways & means of doing so change the entire time you’re doing it, so you have to adapt perpetually. The wild west days of the internet are over now, unfortunately. Mainstream media is watering it down day by day, & pushing out real creativity. That’s just the way of things. I expect I won’t live to see the next big change in how we consume media. The internet will become a boring standard, controlled by a tiny group of people with money, until someone carves out a way to communicate that only a few people know about again. I have a feeling the next thing is a long way off though. Of course I may be wrong. In any case, for now, my little chunk of the internet is secure until the shadowy people who want to ruin everything decide my relatively inoffensive content is verboten. Maybe that’s a long way off too, but it feels like you never know where an attack will come from these days. What was acceptable ten years ago can get weaponized against you. It’ll be 15 for BF in March of next year. A good long time for people to scour through. Long time creators all have targets on their backs, & no amount of apologizing, or good work can save you when your number comes up.

There’s always a way to make a profit. I don’t know if it’s a rule of acquisition but it should be.

I think the closest one is #92, “There are many paths to profit” from the DS9 novel, “Highest Score.

Jess missed a D on the last panel. Just letting ya know because you tend to fix such things.

Also a joke about the many ladies of this story who have extra “D’s” that I’m too lazy and or untalented to write.

You could do a joke like:
“You know me! I’m OBSESSED with Jessica’s Ds!”
Hee hee hee!
:D

I was just on page 2013, and the whole page just turned into a blue square or a square-type of shape.
I don’t know what that means.

It probably means the page was trying to load some broken ad.

I feel like the cycle of ever-newer cool kids’ hangouts online might itself break or change over time. There are so many ways of becoming obscure already.

Then again, maybe Urbit will be the next cool platform. I haven’t checked up on that project lately…

Maybe it will loop back around to MySpace.

I always enjoyed the Travel Channel’s Disney pieces. They showed the Victoria and Albert’s dining room one time, complete with the chef’s table, and I actually wanted to be there. Then I read their menu and discovered that, between the available food and the prices, I really didn’t.

It’s hard to predict when it will happen but there will be another internet. First it was writing. Then,the printing press and movable type. Along came photography. There probably isn’t anybody alive now who remembers it but in the 1920’s radio was a wild frontier that in many ways paralleled the internet of the 1990’s and early 2000’s. Even Sci-fi writers didn’t see it coming until just before it happened. I just wonder what the next way of disseminating will be.

The prons are always with us, no matter the media used.

“…In Japan- a pretty woman…nude, in a bath house, with all of her town’s people, also nude…in the public bath house, is boring and proper.
A photo of a nude woman in a private home…is not proper.

my conclusion- pornography…..is a question of geography.”
-paraphrased from the 1956 film- Teahouse of The August Moon.

About radio… In the old days the wire services would embargo news for 24 hours, giving their own newspapers the scoop. But amateur radio broke that embargo.

Jackie pales give us a mystery for us to figure out.

P.S. my birthday is coming up as well ;)

Its thanks to you I found Defunctland, now I’m obsessed! Thanks!

CGNAT arrived because there is a world-wide shortage of IP version 4 addresses.
However, there’s no shortage of IP version 6 addresses. So you just need to upgrade a home server to the new protocols. You likely don’t even need new hardware for this. (Unless your ISP provided a router that has to be changed. Mine lets my conputer do its own roiting)

I’ve never tried IPv6 myself, but a friend with several servers at home found it a pain because IPv6’s built-in autoconfiguration meant the IP addresses had to be locked down in 20 different places as opposed to just 1 for IPv4.

What we really need for home servers are NAT-capable protocols. HTTP 1.1 is surprisingly good in that regard, but most of the old protocols aren’t at all. There’s “net2o”, a sort of decentralised web by Bernd Paysian, but it’s still supposedly in alpha after many years of development. I personally have had enough of alpha software. But this is kind-of where my knowledge runs out since I got tired of running my own server many years ago. ;)

I have a friend who rents a virtual private server for about 5 or 10 dollars a month.

Facebook is shrinking as younger people move to disparate services instead of a one-stop-shop for social networking. dev.to, despite being by and for mainstream drank-the-kool-aid devs, recently ran an article on doing without Google and other mainstream privacy-violation-funded services. There’s hope yet for the real Internet, if you’ll excuse my reverse-snobbish phrasing. ;)