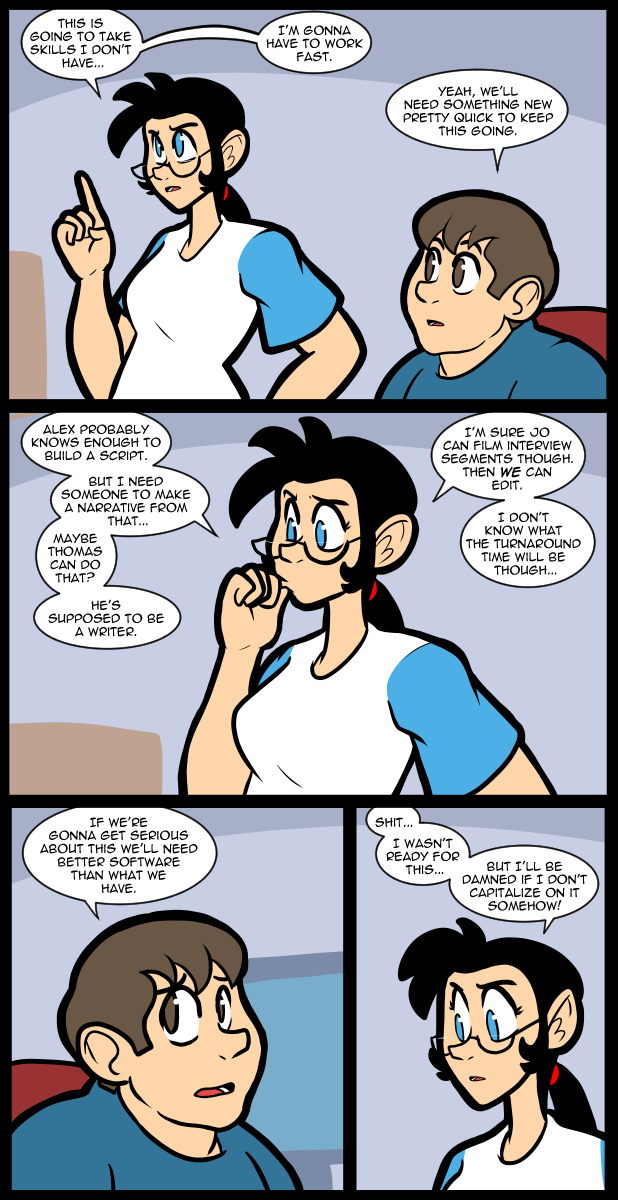 Doing something creative for a living, or running your own business, is much harder than just having a day job. That’s not to say that having a day job isn’t hard, but you don’t have to worry most days about everything falling apart. Generally all you have to do is get up & go do the thing while other people take care of making sure the business keeps existing. I’ve done both things & working for yourself only beats out just having a job in that you only answer, for the most part, to yourself. For me, that freedom is worth the stress. I hate being ordered around. I detest other people having power over me. It’s unavoidable in some cases, but I’ll work twice as hard, for half as much money, just to be able to tell people to fuck off if I feel like it. I don’t know how much of that is just in me as part of my basic makeup, or how much came from my dad, but he’s kind of the same way. I’ve seen him work for some pretty hard to deal with people just so he could do things his own way & I absolutely understand that. On some level your audience or your customers are your boss when you’re running your own thing. Having a regular job puts a kind of buffer between you and the end user. Assuming you work with the public at all. I mention all of this because Jessica could easily go into any field she wanted. She’s legitimately brilliant & capable, but what she wants is freedom; to do things her way & leave her personal mark on the world. Arguably she would serve the world better by becoming a scientist, but it’s kind of like that meme of Sauron from that old Spider-Man comic. She doesn’t want to cure cancer, she wants to turn people into dinosaurs.

This comic is me trying to turn you into dinosaurs. I’m passively manipulating you into thinking about things that I want more people to think about, like looking at the world from an antagonist’s point of view, or seeing the humanity in someone who seems annoying at first glance. All these little themes are me trying to get you to look at the world the way I want you to. At the same time I try not to beat you over the head with stuff. Preaching doesn’t work unless your audience is already into the concepts you’re preaching. For the ones who aren’t you have to be more subtle. A lot of people instinctively bristle at propaganda. It’s a defense mechanism, so if you want your ideas to go forward you need to make people understand that they aren’t malicious over time. Or, if you’re evil, coat them in a layer of sugar until you get them past their defenses. Me being evil or not remains to be seen…

Also, as a little bonus, in the second panel Jess is almost going to put her thumb in her mouth. This is backstory you’ll probably never see in the comic, but she was a thumbsucker as a kid & still has an instinct to suck her thumb when she’s getting overwhelmed that she actively has to avert. I drew that mostly for me because ages ago I sketched an image of Ed & Jess as kids & she was sucking her thumb. I’ve since lost that image, but I always think about it when I’m thinking about the relationship they had growing up & how she went from a timid child to a brazen adult. Or at least she learned to pretend to be brazen when she’s emotionally prepared. Just a little flavor text for the card.

Sometimes I feel like I’m here for the bloggish commentary and the comic is just a bonus, and other times vice-versa.

As long as you’re here for something…

“This comic is me trying to turn you into dinosaurs.”

Sweet. Can I be a triceratops?

Yes, that’s my favorite one.

Please, can I be a raptor?
They have nice teeth! Rowr!

I wanna be a Dilophosaurus!

Your wish is granted!

Yay! :D Now I can spit poison and tear out the intestines of security personnel!

“This is backstory you’ll probably never see in the comic, but she was a thumbsucker as a kid & still has an instinct to suck her thumb when she’s getting overwhelmed that she actively has to avert.”

The layers of character-building one needs to make a “simple webcomic” is appreciated.

Hahn, that’s what I picked too. Baseball bat with spikes vs. stegosaurus tail. Imma go with stegosaurus. Ya’ know, radiator fins on my back, for the Win!

“capitalize” and yes, yes she should.

I started a small business out of sheer desperation back in the mid-2000s. Given that I’m still doing it to this day, I think, says something.

Panel five is often how stuff gets done. Something happens and you roll with it.

I count only four panels. The secret is still safe!

I kinda like that you’re trying to get us to have more critical thinking.

I also feel supported in creating more, so there’s that

“I don’t work for exposure. I work for money.” I have to say this about four times a day working as an artist.

That’s funny: my boss (service sector) says “we’re not working to make money, we’re working to make friends,” right before he tells me that he’s trying to run a business and to stop throwing his money away.

All of his siblings had their own businesses and, after 35 years, his is the only one still in existence.

But yeah, that’s what my writing professor said: if you want to be a profesional, forget emotional fulfillment. Write what sells.

As an Art Teacher(reformed) at a magnet school for elementary students I would have them write this out a hundred times for one of the homework assignments. A few of them even make a living off of their work.

I take no credit for this.

During the Individual Education Plan meetings with students’ parents I would often get asked about my emphasis on the money side of art work. “Shouldn’t artists do what they love?” I would tell them “Yes, but people also love food, electricity, and roofs that don’t leak. People will do lots of crappy jobs to get those things, and put off what they want until it is no longer a part of their lives. Being an artist is a job. The money part of things can’t be put off til the end.”

I always counseled the parents to push for business courses with the kids. No matter what they did they would be able to make a job of it.

The school art shows were also fun. My kids had price tags on their stuff. “What ever you think would be fair, times ten.”

You’re manipulating us! I’m shocked! It would be absolutely unpardonable were you to, like, have a Carol, Alex, Nina, Ninjo, Patty pool party. I’m sure everyone would be terribly upset.

Yes! We’d all be upset, and also….strangely excited!
:D

Ha I prefer to be a dinobot myself. tell cyberspook about petrorabbits.. lol

personally I always thought this was true of any good story teller. https://www.youtube.com/watch?v=s5hw1tbLM-4

as far as being an independent businessman the truth is the price of freedom is eternal vigilance. you always have to work twice as hard, at least till you find others to do the work for you. lol

Jess can suck her thumb all she wants.

Just don’t have her carry around a security blanket. Linus has long called dibs on that.