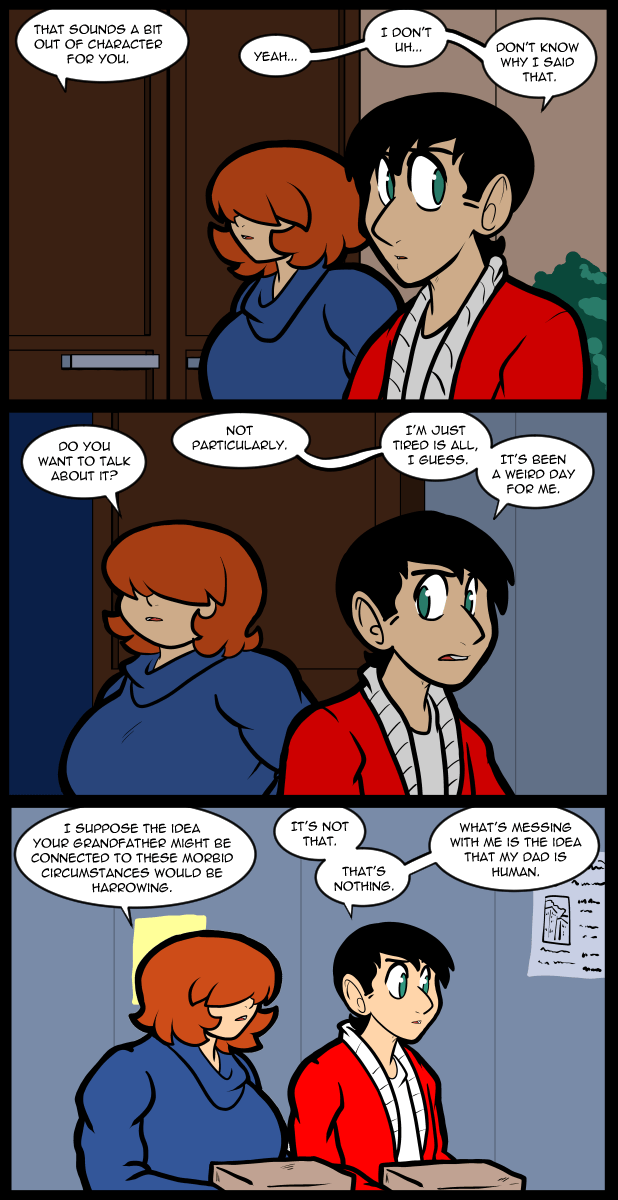 At some point you learn your parents, or the nearest equivalent, will die. At some point later you will realize that they are schmucks, just like you are, fumbling through life & making their best guess at the right action. When that time is varies depending on how capable your parents are divided by how smart you are. Reggie isn’t as smart as he thinks he is, but he’s not an idiot either. Bit by bit he’s growing up. Maybe a bit more slowly than others, but he’s getting there.

Another key part of growing up is supporting my webcomic, specifically, on Patreon, Subscribestar, or Paypal I guess. Maybe I should ad more things. It seems like people are having trouble sometimes. In any case comics are for your whole life and mine is the one by which your journey into adulthood will be measured by supporting it.

Jackie, I recently watched an anime series that I think you might like. It’s not available dubbed, only subtitled, and it’s available on CrunchyRoll. It’s called _The Aquatope on White Sand_.

If reading subtitles makes you more tired, I’ll recommend something else. But if you can watch it without strain, I recommend it.

At the beginning we meet Fuuka, a young girl who only had one dream: to become an idol. She very nearly made it but as we meet her, her dream is in ruins. She’s not from Tokyo but went there to become an idol; in the first episode she panics at the thought of returning home to everyone she knows as a failure, and impulsively she flies to Okinawa instead of returning home.

In Okinawa she has a series of encounters that lead to her meeting Kukuru, a girl her age who loves all forms of sea creatures and deeply loves the small aquarium where she works (Gama Gama Aquarium). But Gama Gama is old… stuff is breaking down, money is tight… Gama Gama might have to close soon.

There’s a little bit of magical stuff. Okinawa has legends of “kijimuna”, spirits that look like red-haired boys, and we see one or more kijimuna running around sometimes. But overall the show is about people living their lives and seeking their dreams.

I really loved watching it. I love the characters, I cared about what happened to them.

P.S. There isn’t actually any romance or dating in the show. There’s a young man who seems to like Kukuru, and it seems like Kukuru and Fuuka might like each other, but nothing is shown onscreen. I suspect that the people making the show were playing it exactly like Xena and Gabrielle from _Xena: Warrior Princess_ (by which I mean: they knew people would ship the two characters, and they never did anything to rule it out, but they felt they couldn’t explicitly confirm anything).

Thanks for the recommendation, I’m definitely going to check it out. I love anime, but I’m super picky about it too. I can’t count the number of shows I’ve started, only to stop watching them after a few episodes. This sounds like something I would enjoy and I prefer subtitles, so that’s great too.

yeah it is really weird when you have that moment of realization that other people are there own existence not just a character in your life, it makes you appreciate the world you live in more.

Well, it’s not so big a surprise to find out your parents are just as likely as you are to be complete screw-ups. After all, they spent how long telling you that they were right when it came to you? Eventually you have to believe it, or act like you do, or you never get out from under one punishment or another. And if you act like it long enough, eventually you believe your own lies.

As for Reggie, he really shouldn’t be surprised. He’s opening up to someone he clearly has feelings for. The concept of “feelings” may be throwing him, though. He’s clearly not good with them. I’m familiar with that ground.

Is anyone good with feelings?

I agree.
Even pros can fail at dealing with feelings.
I saw a pro councilor lose it, when she thought her neighbor was bossing her kids around.

Feelings can be tough, to be sure.

If you and your parents live long enough never really stop having those informative moments. My mom was in her nineties when she casually dropped that the guy she had dated before meeting my dad had a Harley motorcycle similar to the one we were walking past in the parking lot.

Doggone it. :)
I guess that the pairing of John + Alex, isn’t going to happen.
Oh well.

Maybe John + Maddie, or John + the girl with the pig-type fursona, will be a couple, instead!
:D

Yeah, that’s one of those that throws you for a loop, Reggie.