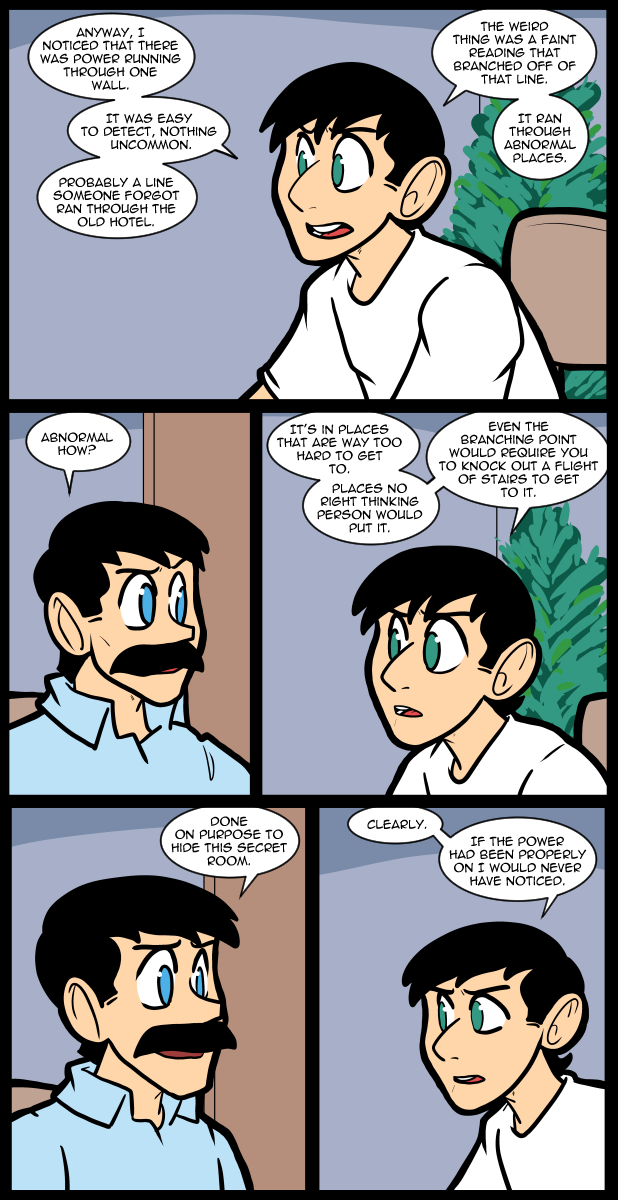 Our house was added on to by the owners over time, so the wiring looks like it was done by a crazy person. If you look at the map of it things make almost no sense. Basically every electrical thing, including the phone line, looks like a game of chutes & ladders. Repairing anything is a herculean task even for experts. On top of that the attic is so tiny that none of us can fit in it & a lot of wires are in the attic. Because people used to be smaller 100 years ago when the base of the house was built.

Reggie should pursue a career as a safety inspector. He’s so hazard prone and attentive to detail that he’d be a natural in finding questionable/hazardous changes to standard protocol

You may have found reggie’s calling. He’d be a master at that.

I am a midget. Perhaps I should become an electrician for just such a purpose

You’d probably be worth your weight in gold to someone working with electrical in confined spaces. That weight presumably being rather modest….

I think the moral of the story is: Never trust midgets with wiring installation!

You may have weird wiring, but do you have eternally creaky floors due to the people who put them in using the wrong nails? Let me tell you, they are an absolute treat.

The floors are wildly uneven in some parts of the house & it gives me a fun house effect sometimes.

A friend of mine live in a flat whose floor is so fucked up he has to put wedges under every piece of furniture, otherwise his cupboard won’t open because the door would be blocked by the floor, and the fridge won’t close because it is tilted too much.

Reminds me of that Winchester woman who was convinced the spirits of those killed by her family’s guns would hunt her down if she didn’t keep having building works done on her house.

What could building works have to do with the vengeful gun-dead?

I think her,…um…reasoning (?), about the ghosts was- if she built a small bedroom in her house, for each ghost that was killed by a Winchester rifle, then these ghosts would live in peace in those rooms, + leave her alone.

We added sheetrock to the ceiling in my moms room to compensate for the existing ceiling board that was sagging between joists. On one end of the room I could put screws in the ceiling standing flatfooted on the floor-other end, I needed a stool.

My home construction story involves a passthrough (hole in the wall to see and pass things through) in the kitchen. The owners before us didn’t like the look of is and patched up the hole badly. Very obvious indent once you noticed it, drove my mom nuts. Finally she got some folks in to do it right, and of course they sold the house two years later. A year after that she’s chatting with the new owners, “oh, and we’ve decided to put a passthrough in the kitchen. The guy came by last week for a quote.”

Mom asked if the worker had noticed the hole was already there, since it had been patched flush but the space still hadn’t been filled in or anything. He had not. They got someone different to do the job.

My Dad did quite a bit of the wiring in our house…When I was growing up, this used to impress me. Now that I know something about electricity, I’m mildly impressed the house hasn’t burned down yet ;)

Ah another in the fold asking the question in respect to their fathers “What the Heck were they thinking?”.

Put in a breaker panel to replace the original screw in fuse panel which was a nightmare, even for the licensed electricians who did the install and I disconnected/pulled/peeled a whole lot of bad wiring from the basement, attic and garage.
Industrial oil/water resistant power cord does not good house wiring make.
It tends to go all apple crumble due to age and heat.
I still find wire stubs that are live and I have no idea where the other end is.

Wired in an outlet in an existing line, and tested it with a sawzall-it ran slowly and the light nearby pulsed with the sawblade movement-come to find out, it was part of a three way circuit.

What is a three-way circuit?

Thirty-five years ago, my parents bought their house; they were in a rush to get moved in, because mum didn’t want to give birth to me in the old house, with all its problems.

In doing so, they never checked for problems, and over the next thirty-five years, a combination of factors–dad being useless and thick, and mum not wanting to deal with builders on her own–resulted in her recently having a massive emotional breakdown over… well, over everything.

She even tried to kill herself (Which we later learned was the third time she’d tried).

We’re trying to fix everything we can with the house, but it’s a massive job. There’s basically no window in the house that doesn’t need something doing, the utility room and disused outdoor toilet need knocking down, the kitchen needs an extension so there’s space to put the washing machine (currently to get into the utility room, you have to squeeze past the fridge-freezer).

So far I’ve sorted out a replacement cooker so they don’t have to open it with a knife (The gas stopped working properly recently, meaning it only had two settings–maximum and off), a replacement fireplace so they don’t have to turn it on with a match (No spare parts for one that old), a microwave for until the new cooker arrives, some builder visits for quotes for things, and a plumber to confirm to her several times that there aren’t any lead pipes in the house.

I wish she had decided against an extension (Or called the builder a “wide boy”); muggins here is going to have to deal with all the planning permission rubbish, and we could’ve just had the kitchen redone to fit the washing machine next to the cooker and move all the cupboards to the opposite wall (It’s a small and narrow kitchen).

So I guess the takeaway here is that if you wait long enough, someone else has to fix your problems for you.

(That should be “and not called the builder a “wide boy”)

Yeah, I was wondering why your mother would make a fat comment about the builder.

“Wide boy” is slang for a criminal.

Interesting. Every other time, people referred to fat men as “wide boys”.

I’m willing to run electricity. I’m not good at it, but I know how it’s done, and I know how to watch a video / ask an electrician for advice. It’s not really all that complicated if you know the math, but it’s dangerous.

That having been said, the most difficult power line I’ve ever run absolutely PALES in comparison to plumbing. I will choose electricity over plumbing every day of the week and twice on sunday. I would gladly run the risk of death by electrocution as long as you don’t make me solder pipes and install toilets.

Ah good ole copper pipe. All the modern stuff is that flexible reinforced stuff that you only have to deal with fittings once you cut things to the correct length. Fittings that require the correct tool to crimp properly. So no soldering or hazardous glues/solvents …. well for water feeds anyways. Drain lines are still a pain.

Omfg you could turn this into a murder mystery.

I heard Smedley the dog laughing at your response. Been a while.
(Whoops, guess its Muttley) https://www.youtube.com/watch?v=VJGUSrL63jE

I don’t just do this shit at random. This scene has a purpose so it’s staying in. In two years, when you can just read it in a sitting, it will flow exactly how I want it to.

It’s about the relationship between son and father; the electrical history is a prop.

I’m enjoying seeing the interaction between Reggie and his Dad. The character development and insight to what makes Reggie who he is adds to the overall story … at least In my opinion.

We live in a mobile home that was built as quickly as possible, and without the proper planning. Because of this the house’s electrical work is set up like a power rangers villain designed it and their evil plan is make the house useless. One room doesn’t even have power now, and we can’t figure out why, despite my pretty solid skills at electrical work. What I’m saying is, I understand your frustration.

If I knew a single thing about wiring, I’d help you. However, I don’t, so… MEGAZORK HOUSE

(You should probably get a professional electrician to look at your wiring.)

About a year after we moved into our (previous) house (we’ve moved since) we had a professional electrician rewire the entire place. Turned out that although there were three-prong sockers everywhere, none of the grounds were grounded. We ented up with more outlets in more places as well. The whole project cost about $3000 Canadian and was well worth it. That was in 1985 dollars; there’s been inflation since.

I was really happy that it was all feasible. Felt confident about the electricity ever since.
The electrician told us about the ancient 1920’s era wiring that was designed for a lower voltage than is in use now.
Very happy to have all that safely discomnected.