I finished Super Mario Land 3DS as completely as a person can.  No secret was left uncovered, no coin left uncollected.  I used over 300 one ups.  All in all it’s a pretty well made game.  As I’ve said before the difficulty curve is a little wonky, but not that bad. 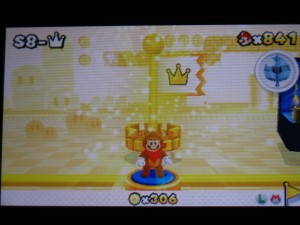 That’s the absolute final level you unlock when you collect everything.  Usually I hate stuff like this because I can never do whatever tasks are required.  I’m a pretty decent Mario player though.

For those of you who aren’t aware, the 3DS has a lot of built in wireless functionality.  In Mario 3DS you can recieve and give special gift levels and trade completion times.  I don’t know how the 3DS chooses it, but someone on your streetpass list is selected as your rival and your times are shown alongside theirs.  Here’s the deal though, I’ve never met the dude who is my rival.  I passed him on the street at some point and the DS decided he was the guy.  He’s also in my Mario Kart game as a rival.  To top it all off he’s not all that good at either game.  I have to wonder if he’s on the other end of this thing wondering who the fuck I am and why I’m so fast at completing levels.

I tried not to pay attention to the times in Mario Land, but every so often I couldn’t help but see.  Then I’d go into the level and make absolutely sure that even matching my time would be difficult.  I pick really dumb things to be competetive about.

I’m not very good at Mario Kart, by comparison.  I’ve gotten all the 3 star ratings, but, in reality, that’s the least best you can do.  Once you go online it’s all super players that spend a lot of time competing.  At least that’s how it was on the Wii.  I was pretty good at the Wii version though.  Motorcycles were my speciality.  On the 3DS I’ve never found one kart selection that works well across all tracks.  Maybe that’s for the best.  It certainly adds to the replayability.  Anyway I haven’t been able to race online since my net connection has deteriorated in the last year or so.  My provider is actually working on banning services like Netflix because they use so much bandwidth.  The one race I was about to win online errored out, so I have no idea if I would actually have won or not.

If nothing else the 3DS has saturated the area beter than Dragon Quest.  I think I only ever met one person who had their game on in the whole time I was playing it.  I’ve met 3 people with a 3DS.  And when I say “met” I mean passed close enough to them that I got data from their device.  I never actually spoke to them.  Although in one case I think I saw the person.  Hard to know for sure.  In any case it’s neat.

Now that I’m done with Mario I guess I’ll go back to Tactics Ogre.  The difference between play styles is really wide though, and I can’t just jump in to TO as easily as Mario.  I’m having twitch gaming withdrawal.

In other news I have drawn all the sketches from the pony affair, I just need to send them out.  I found those sketchcards the other day after I finished the other drawings, of course.  >:|  I’m not sure if the actual box of ponies ever made it to its destination, but I guess if it didn’t I’d have gotten an email by now.  I made sure to insure the box in either case.  Anyway, those should be going out whenever I can find envelopes and stamps.

When you have so much hair it’s almost criminal not to do interesting things with it.

Love Nina’s hairstyle… But Carol will always have first place in my heart.

I had a friend with long hair and she wore it JUST LIKE THAT for a dance. So freaking adorable!

PS – just caught up! LOVE the comic! Keep it up!

Yea, i got the 3DS expecting a lot of kids my age to get it, since im in college and all. over all, about 5 people have it on Campus.. which is kinda good I guess, but we all have each others puzzle pieces, so i won’t be getting of the pink ones any time soon… interestingly enough, it did keep they’re regions the same, so i have one from Texas, Japan, Wyoming and Massachusetts. Weird places but I guess thats what happens in college… On top of this, i’ve seen three of those 5 with it out, but its so hard to approach them because i just feel nosy.

Also, I would never steal a game because i wouldn’t have the case. Without the case it would be worthless in a bout a week to me. And it is a very good thing if people are stealing books in my opinion, i would almost let them if they are that desperate to read… except twilight, i would tackle them if they tried to steal twilight. nobody should read those books…. nobody.

Yea 3ds is very wierd at doing different things, especially streetpassing. I’ve finally met the 2 other people at school that have them, and i think there are 2 more because one day by happenstance i got to new mii’s and neither of them had made new ones.
Books are worthy of taking!

Yeah, I too was wondering if it was Wes, he’s always right on the edge, his lack boundaries are different then Reggie’s, and it appears he’s milking Reggie for info so he can move up the ladder by walking on others peoples dead carcasses, rather then his own merits.

OMG! OMG! The new Nina look is scrumptious! You’ve made my morning

i think what they mentioned in the comics is why places like Gamestop have the actual discs in paper sleeves behind the counter(or at least the ones near me do that,about 3 Gamestops) makes it so there’s a chance the game you want isn’t available sometimes though.

what you see at gamestop is NOT (necessarily) what you get. picked a ps2 game, had original cover AND manual. after check-out, got a crappy “gamestop” cover with no manual; at least the disc was okay. too busy with other stuff to notice until i got home.

I always get that feeling with online games. I’ll play offline for a while until I’m confident I’m at least decent at it,t hen I’ll rock the online. With Mario Kart for the Wii (3ds hasn’t justified it’s existence yet in my eyes) that didn’t happen. I felt like Mike Tyson fighting a group of kindergarteners. It felt pretty good actually.

It’s weird that I can relate to fictional characters more than real people sometimes. I suppose it just shows how thorough your creation of them is. I too am one of those people who is saddened that either the public doesn’t read more or isn’t at all discerning in what they read, to the degree that I was never angry when I learned people were stealing from the bookstore I used to work in.

Probably why they fired me… :)

yeah, i used to get in trouble for reading all the time (at school, at work, at the dinner table) I could come up with a quote for any situation, but no one else would ever have heard of it.
then, webcomics were born! Ah the joy!

Yeah. Except now that there are webcomics, I don’t read nearly as much as I used to. Hypnotized most of the time, I guess.

Yeah. Kinda hard to keep up with a book when you’re following 50 or so comics. Or is that just me? Hey, maybe Crave could have a contest to write a reader or a reader’s character into the comic. That’d be neat. Oh, that’s probably just me too.

Wow, I wonder what the special occasion is? Nina likes to be stylish with her uniform, a hot look. I agree that its pretty neat to do stuff with long hair, Id keep hair long, I tried picturing her with short hair and it doesn’t work (the length and fullness of her hair helps offset her height and ear size).

You need to get a life!

that is the most gorgeous hair.

I stole a book once. It was a collection of Issac Asimov short stories at a used book store. I actually committed the theft entirely by accident. I was ignoring everything around me as I read the first couple stories, when a friend urged me to leave the store. In a sort of hazy euphoria brought on by reading, I remember walking out of the store with the open book in my hands and trying to follow my friend down the busy sidewalk without talking my eyes away from the pages. By the time I bothered to look up I didn’t know where we were (I get lost really easily) and my friend refused to go back with me to the store so that I could pay for the book. I felt pretty bad, even though the book was only a dollar.

I’ve done this. What I found weird was, I went back on my own later to pay, and the clerks refused to let me buy the book since I walked in the door with it and went straight to checkout. I then tried going into the store proper, browsing around, and then coming back to the front, and they remembered me and still objected to selling me ¨my¨ book.

So I had to return on another occasion and do it the way I should’ve apparently done it the first time.

I suppose the store clerks might have thought they were motivating me to come back later and buy more books, since I bought an arm length of books on each of those visits. But I only returned to the store when I would’ve returned to the store anyway, and I always bought an arm length of books. Really, they sold one fewer book that way, as I had to have a book I otherwise would not have had the second trip.

I approve of the eyeliner, choker and short hair look, she’s rockin’ it.

Yet another point on the Nina hotness scale…

I once read a statistic that “Terry Pratchett” novels are the most stolen books in Great Britain. We learn that books are being stolen and that British thieves have good tastes.