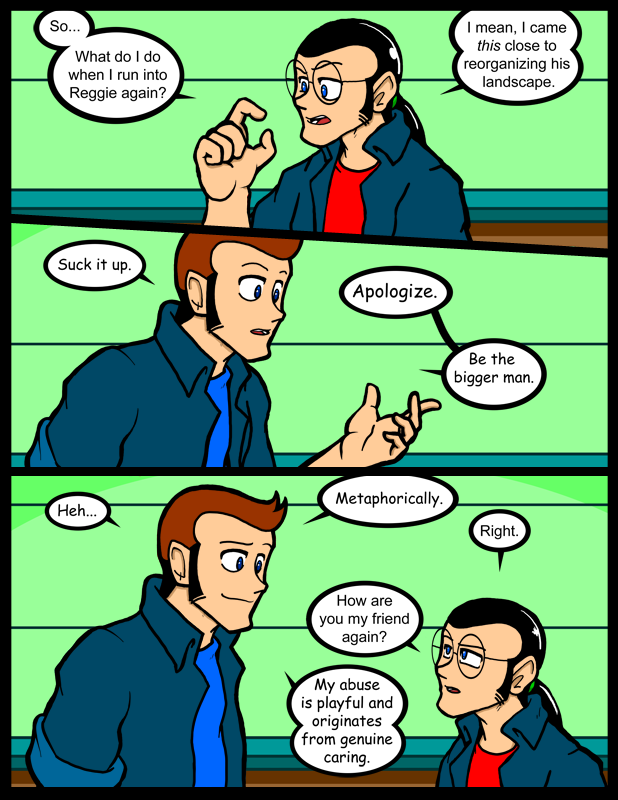 Well, when this comic goes live I should be making my way to a wedding.  The second I’ve been to in a relatively short epoch.  It looks like the weather is going to force me to stay overnight, possibly twice.  I’m an odd duck.  I don’t like being separated from my cave dwelling, deep in the mountain.  If it were olden times I could totally get away with being a paid hermit, which there were at one point.  They lived on the estates of nobles who couldn’t be bothered with thinking about deep philosophical things, so they paid people to do it for them.  In some ways, now that I think on it, this is still going on today.  Maybe I should find a rich person to attach myself to so they don’t have to think about stuff.  I’ll just take care of that for them, for a nominal fee.  Then I’ll wander around all the time and be like “Consider the rose, Algernon.  Consider the rose…”  then look wistfully into the middle distance.  That’s a long con I could get in on, Juan.

Maybe I can twitter from the road.  If I can figure out how to make my phone do that kind of magic.  Pehaps I should begin praying to the internet now, just to be sure.

You should market the idea to others, “Dial ‘a’ Thought” for a ‘no thought provocation – no fee’ pay plan. You’d be rich!

such a caring friend

Enjoy the reception! And I agree, a stable hermitage is a very safe, comfortable place to be, isn’t it? :D

Playful Abuse is the best kind of abuse.

See, this is more like it. At least Thomas is acknowledging that it is practicality-Ed cannot control his temper and until he can, he has no business risking himself around Reggie-instead of some of that weird, “Oh no a white knight you are a terrible person for not being a terrible person.” logic I see online some places.

Well… White Knighting is bullshit behaviour, plain and simple. Stinks of a sick agenda.
Nobody needs an unbidden guardian charging to their rescue. That is just meddling.

Now on the other hand… there is often opportunity for a good bit of Black Knighting.
And the difference is all in the intent. While a White Knight sort charges in to protect because they fundamentally objectivise the target of their concern, a Black Knight sees the same situation and charges in to start a fight for the hell of it with the added assurance of moral justifiability.
For instance… a White Knight might try to stop a mugging in the street because it is wrong or illegal… but a Black Knight would stop a mugging in the street because they get to exercise sweet, delicious violence and still come out of it the “good guy”. O’course even that has limits. Giving a mugger the “to the pain” treatment is probably a bit much.

My abuse to the people around me also originates from genuine caring. Speaking of which…
*writes it on a posterboard and hangs it in his cubicle*
ALSO
I was just thinking this (literally, 2 seconds ago as I was reading another comic), and realized that it already exists on a comic I read:
I think that online comics get more traffic than the artist might think if they only base it only upon the amount of comments they receive. This is based on my own personal experience. I read several other comics, but never have taken the time (aka, bothered to go through the supposed annoying process) of registering myself so I can say, “Hey, good job.” I can only assume there are other likewise lazy people out there.
SO
This could all be solved by an easy-to-use-you-don’t-have-to-register-and-remember-a-name-and-password type system.
AT WHICH POINT
I realized that’s what this was.
ALL THAT TO SAY
Hey, good job on meeting the needs of the more lazy audience members you have. :)

ps
I’m at work and don’t want to do work (aka, bored = long comments!). Yet I still show up every day…

i agree with thomas. wouldnt bother with abuse if i didnt care. i mean why waste my time if the person means nothing?

I don’t remember where I heard it, but this will always be with me: “Sarcasm without love is abuse.”

anyone else wonder if day 2 is going to last 300 panels as well?