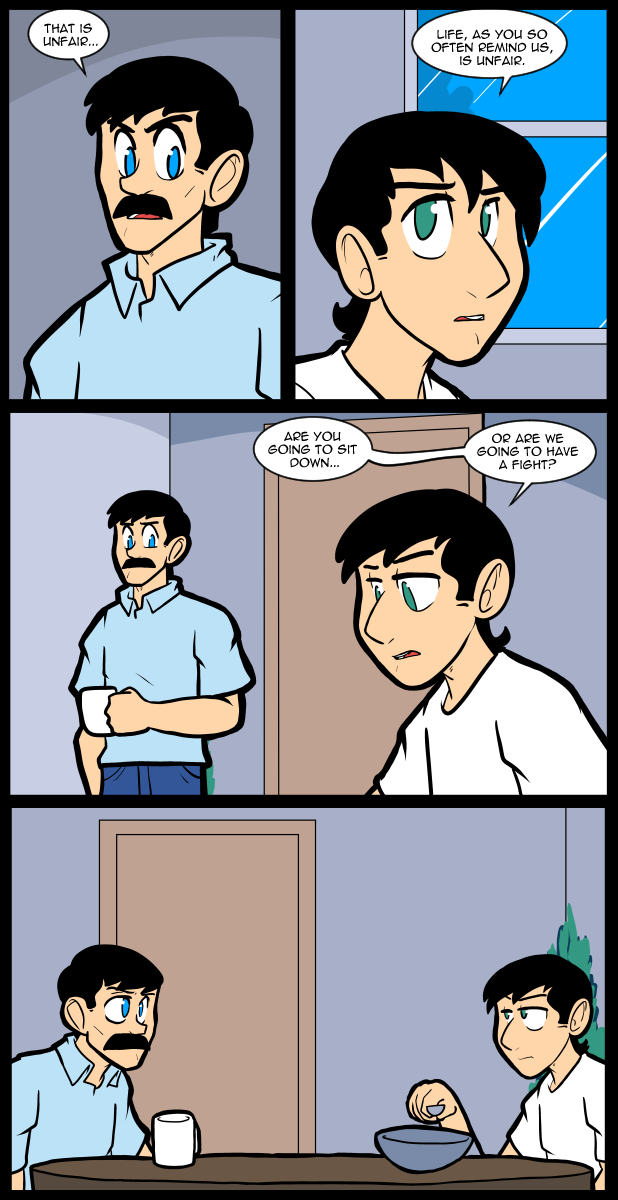 It is possible to be a little right & a little wrong at the same time. A lesser man might have risen to Reggie’s bait & the fact that his dad reacts by not escalating illustrates an important aspect of his character. He is willing to entertain the idea that Reggie has experienced their relationship in a way that doesn’t match his own understanding. He’s aware that his dedication to his family has distanced them from him. At the same time he’s not his son’s buddy. He’s his father. That distance is not always a bad thing. Finding that balance, however, isn’t easy. He is a man of principles & he hasn’t failed his son in that respect. Even though they are a bit skewed Reggie also has principles. He’s also learning to stick up for himself instead of relying on the power of others.

Reggie doesn’t eat cereal, he just likes to look at the spoon

A frame with a spoon in the mouth looks weird.

Always reminds me of smokers. Like an old Dick Tracy villain with a cig hanging onto a lower lip, spouting some nonsense.

He’s just sneaky and eats it between frames?

Tsk, Tsk!
Doing sneaky stuff with your breakfast, turns you into a cereal killer!
[ Sorry. I just HAD to! ] :D

Careful with those breakfast puns. First you’re making cracks about eggs, then you’re sent to a farm upstate, raisin’ bran.

You are so wise about breakfast!
You are sau-sage!

I’m a BACON man, and some of my jokes are rasher than others. :D

Yeah, it really did feel like your attempt ran out of juice. If you’re going to be a cereal punster, you have to try harder than that.

I probably should stop my food jokes, now.
My jokes are toast!

Rice Crispies are not allowed in the house after they all went insane.
One snapped, the other cracked and the third [censored due to graphic nature]

Heh, heh, heh!
The rice krispies guys went all Pulp Fiction[R], all of a sudden! :D

“Are you going to sit down, or are we going to have a fight?”
No reason you can’t do both!

…I just want to smack Reggie for his first line on this page. In my head I’m picturing a child version of Reggie who is wanting every toy he sees, but his dad says he can only have one toy because he (the dad) doesn’t want to spoil his son and when said son yells out “that’s not fair!” Dad replies “life is never fair”, which brings us to this point where Reggie gladly shoves that line in his dad’s face because of all of that. That’s how this comes off to me.

Your take feels unfair as well. I don’t know if Reggie’s father is a good parent, but it has the feeling, to me, of deliberately throwing a catchphrase you found hurtful back in your face.

It might be childish, and it might even be childish if Reggie’s father is terrible at being a perent, but… A phrase used once doesn’t stick with you like that and no matter how many such situations it has been used in… it’s almost certainly also been used in situations where “because life is not fair, it is acceptable for [insert person here, including “me”, “your mother” and “authority figures”] to be unfair as well.”

I also feel like the author’s commentary implies that his father has always been more of an authority figure than… a support? to Reggie, and “I am allowed to be unfair” stings so much worse from authority figures, I think.

Considering what we know about Reggie after all these years, I’ll stick with my hypothesis.

On the flipside, the fact that you ONLY know Reggie’s side should make you withhold judgment at the very least. Maybe there’s justification, maybe there isn’t, but the key thing is that you don’t know, and the view of a piece of media is always skewed in one way or another simply because of how storytelling works. Immediately jumping to one conclusion and dismissing others is, in my opinion, just as childish as throwing an idiom in someone’s face.

So, do you spend a lot of time smacking kids then, or just imagining it?

If Reggie’s a kid here, then he’s very tall for his age.

Exactly. Life just happens, but people… we choose to be assholes.

This seems entirely unfair to Reggie as you’re just making up worst possible context for it. Why wouldn’t you assume their has been some actual hardship’s in Reggie’s life that his father has had to explain to him? Or at the very least something worse than not getting several toys?

No discussion of Reggie’s history has indicated anything resembling financial suffering or as a reason for bitterness on his part. Even his employment was to build character/responsibilities/resume/ect without any mention financial need as the family is specifically well off.

What’s more likely given what Reggie has said about his history and even from the context of this conversation; is Reggie’s father has consistently bailed on events in Reggie’s life that were important to him for work responsibilities to the point where he no longer expected his father to care.

panel 3 is my favorite reggie moment so far. the sheer doneness with his father’s shenanigans shows a solidly negative history between them, even without the rest of the conversation for context.

A conversation like this interrupting breakfast surely isn’t improving his disposition any.

I just really love Reggie’s expression in the last panel.

Breakfast was a sacred meal, a DMZ, conflict free time, at our house. You could disagree and fuss, throw napkins at someone all you wanted, — but not at the breakfast table. Be pleasant, or be quiet, or you’d be sittin’ there, alone.
By oh-Dark:30 Mom was chomping the bit, ready to go, later Dad would drag his sleepy butt out of bed and stare at his empty coffee mug till it was filled a second time, and then – like a newborn pup, the eyes would slowly open, re-learn how to focus, and be ready to start the day -slowly.
We kids could be as sullen, grumpy, or as cheerful as we wanted, But DO NOT bring last night’s unfinished crap to the breakfast table.

I’m trying not to make a [bad guy vs. good guy] story, out of this scene.

I know- I probably think too, “ruddy” much about comics, but- I haven’t seen a lot of the interactions of [Reggie + his Dad], to favor one guy or the other…in this scene. Hm.

I know. I love it! We honestly don’t know exactly where Jackie’s taking us. All bets are off. Splendid stuff!

I love how much space you’re giving to this confrontation. A few words, a few looks and it’s all so full of weight about to be lifted at the same time. Very cool.

To me this feels like a defining moment in the relationship between Reggie and his dad. This is THAT moment that a lot of parents have where they come to realise that their priorities, and their authority, is no longer the only one, or not even the major one, in their childs lives. They have to begin to relate to their child as to another person, with its own wants and needs, and not just an extension of them. Sadly some parents never realise that, and are not willing or able to ammend their ways. It seems however that Reggie’s dad is at least capable of listening to Reggie, or respecting his view point in this.

It is certainly being portrayed as a potentially defining moment. That it is happening when Reggie is clearly already an adult … well, it doesn’t imply good things about his father’s engagement with him.

Relationships with one’s father can be challenging. So far as I know, my father hit, kicked or otherwise harmed me in some fashion from birth, to the day I left home at the tender age of 14. I saw him again when I was almost 22. The dynamic had changed I was an equal, and was treated by him as such for the rest of his life. We never spoke of the times before my 20’s. I am almost 70 now, and have made mistakes and faltered many times over the years, but the one thing I have never yet done, is strike another human being, in any fashion. It could still happen, but I am hoping to die with my record intact. Also I am autistic so this may skew my perceptions.

Might have skewed his as well. They didn’t know what to do with folks who presented as different, in those days.
If, say, just for kicks, say you scored 98% on your Verbal, and 7%on your Math.
Would you say; oh! Learning disability? Or would you say, “You’re not trying hard enough, work harder, moron?”

I see the clanker has taken the “sit down” route. Good; long periods spent standing will reduce its oil life.

Love that Reggie’s dad is almost actively avoiding contractions. Really reinforces that “Am I really a human being?” angle.

The amount people sit is actually terrible for their health.

Given the Author’s mention about “balance” in the father’s parenting behavior, I’m lead to view this page as Reggie “walking a tightrope” between “getting-through to a new level of communication with his father”, versus “provoking a response that obligates his father to retaliate with punitive authority”. I imagine that a lot will depend on…
1)__just how familiar this ‘tightrope’ is to Reggie.
2)__how careful he’s willing to be.
3)__how much ‘confrontation’ his father is willing to tolerate, in order to hear this story.
4)__how accurate they **BOTH** are, in reading each other’s responses.

There are just so MANY ways that this could “go south”, if one-or-both of them make even a small misstep…
…& that’s not even considering the possibility that one-or-more family members might accidently(?) intrude upon this scenario, & further complicate the dynamic beyond any hope of recovery.

I’ll be interested to see what story-telling choices the Author has in-store for us.
;)

The way that Reggie is handling this should, by itself, be an indication of what his father has done right. No anger, no little jabs, no pouting. Just reasonable conversation. Perhaps a little adversarial, but only a little. He’s keeping himself in check to an enviable level. If only we could all meet our problems with that kind of honor and restraint.