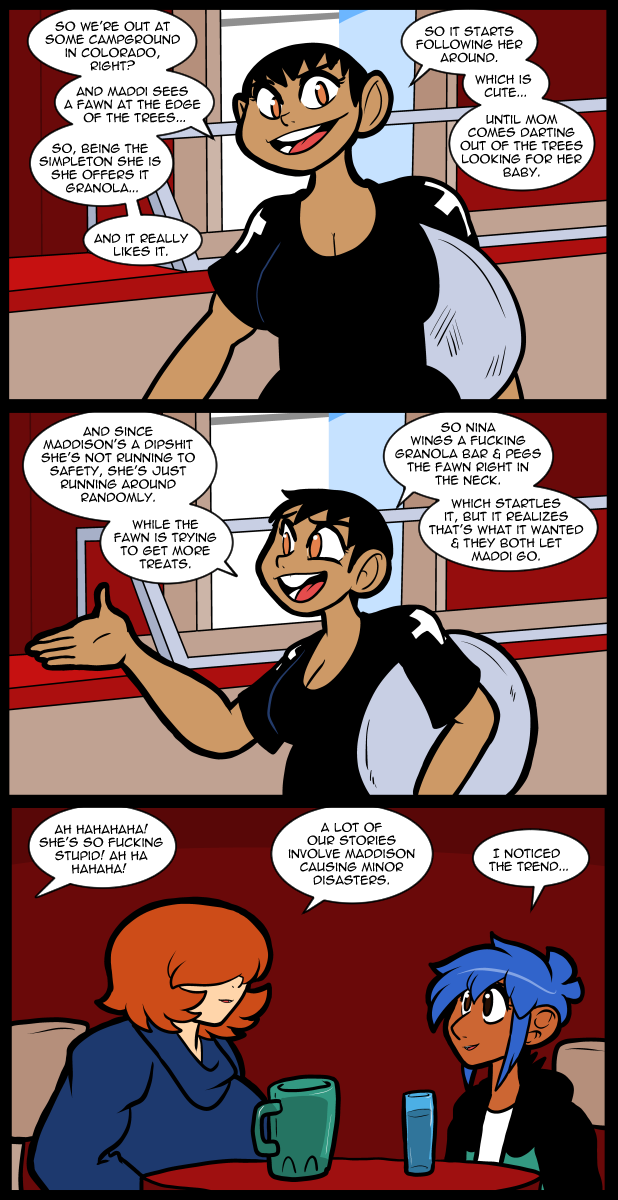 A lot of people don’t realize this, but deer can fuck you up. They’ll stop things to death if they think their babies are in danger. Generally they’ll back off if you retreat but not always. Most of the time, if they feel safe, deer are pretty chill, but don’t get complacent just because they are cute. Any wild animal is potentially dangerous even small ones like bunnies. It’s better to just leave them to themselves unless you know what you’re doing.

Deer keep wandering through our backyard and scarfing up fallen apples from the tree in our front yard.
Usually at minimum in pairs, but as many as a dozen at a time.

I also grew up rural.

The true blessing is being able to greet the visitors with your hunting rifle.

Which is much better than with your car. Stupid suicidal tree rats….

At that point Mom starts yelling. They love to eat the young plants she’s trying to get established in the yard.

Oh yeah.
I once saw a video clip on TV of-
A hunter, or some other type of guy, got too close to a male, adult deer.
The deer felt threatened, + started flailing it’s front half up and down, + crashing: his antlers, his front legs, and his torso, onto the guy.
The hunter guy eventually ran off.

My view is- wild animals are nothing to mess with, especially if they’re your size or bigger.

Don’t play with your food.

I hope the bears in my neighborhood know that rule! :)

SF author L Sprague deCamp told a story about his grandfather, who had been feeding a small herd of deer on the back forty or whatever.

He went to feed them and noticed one of the does seemed to be limping {or maybe i’m imagining that as i recall the story}. He went to her and she. as the deer usually did by this time let him check her out.

Unfortunately the buck {fortunately without antlers at this time of year} decided to take offense and butted him hard in the small of the back, and down he went.

FORTUNATELY,he rolled over just as the buck reared up to trample him.

Have you ever looked at a deer’s hooves? Pointy. Very pointy.

Well {and this is another part of the story i have lost track of – it was probably fifty years since i read deCamp’s account} maybe he pushed himself along or maybe the buck was so flippin’ mad he miscalculated, but he came down with his hooves spiking into the ground on either side of Granpa deCamp’s head.

Granpa, thinking quickly, did the only thing he could do – he reached up and grabbed the deer’s ears.

And there they were – he couldn’t let go because it wouldn’t miss the next time, but nobody knew where he was, and the pasture he keep the deer in was far enough from the house he couldn’t get help by hollering for it….

So they stayed there like that for hours, until someone noticed that it was suppertime and Granpa hadn’t showed up.

Eventually they found him, and shooed the deer – who was probably as glad to be rescued as he was -off of him.

I believe he kept the deer,but he never turned his back to that buck again.

Question..when Nina had her small, er, crisis I guess, when she met Madison at the shop and couldn’t believe someone so dim got hired over her..did Nina not recognize her? Maddison looks pretty unique, and I could see the confusion if she bleached her hair later in life, but flashbacks show her hair blonde, so..

Not a big deal, was just wondering.

She was much thinner as a kid & it didn’t register as the same person. The exact same thing happened to me at my cousin’s wedding. You’ll notice that there is a moment when Nina gets angry like she suddenly realizes something though…
Maddison doesn’t make the connection at any point.

I had the same thought, honestly.

The honeymoon I took with Spousal Ms ValdVin was to a place which had, at one time, domesticated burros which, with generations, became wild-ish in the tame way.

We were walking on the grounds and one of them was on a large patio outside one of the suites, following a woman and her husband around.

When I was a child, the place that we used to go on holiday had wild horses in the area. Once I was feeding one bread when I made the mistake of turning away while I still had food in my hand, and the damn thing bit me on the shoulder. It can’t have been that hard, because it didn’t do any lasting damage, but I’ve never been fond of horses, tame or wild, since.

When my scout troop was hiking a mountain in NM one of my troopmates saw a marmot and gave it some trail mix. It chirps a couple of times and we were suddenly surrounded by a bunch of marmots fading into view all wanting food.

Most of us said “you fed it, your problem. Nice knowing ya” and left. I believe he threw the trail mix one way and ran the other.

Every once in a while I hear of someone’s car getting beat up by one of the bison at the local wildlife refuge. Bison are no great respecter of fences. One afternoon I went out with my brother to feed the cattle and we could hear something crashing up through the brush. Then out from the trees comes a 1000 pound bison (buffalo to us Okies). He just wanted his share of the sweet feed.

I have little experience with deer, but did raise goats, which are about half the size (or 1/8th, depending how you work size measurements). They’re usually pretty chill, always kinda dumb, and will mess you up if you aren’t careful.

Deer are notoriously persistent in the Nara area of Japan. I had a friend who had to toss a bag of food (they sell food to feed the deer in some of the wooded areas there) and run to get away from all the biting they kept trying to do to get more food from her!

At least they’re smarter than peacocks/peahens. Those are mean, persistent, and kinda dumb, especially in urban settings. Why did the peacock cross the road? Because he’s dumb.

Took my grandniece to see a miniature donkey a neighbor had. She was fascinated, and though we told her not to, she ran after it and got behind it. Predictably, it kicked her-right in the chest. She was wearing a thick coat, and it was a small donkey, so it mostly just startled and scared her. Thought it was funny, with her dad standing right beside me, she ran to me. For years afterward, you could ask her,”What do donkeys do?” With her big eyes and Shirley Temple curls she would state in utmost seriousness,”Donkeys kick kids.”

Woods you be a deer and chill?

This is why you don’t feed the wild animals.

There was a family of deer near our house on Whidbey Island. They ended up being part of the family, and by the second generation of them they would hang out on our property, frolicking with the dogs, and even letting us bathe them. In the winter they slept in our garage on blankets and straw that we left out for them.

I missed them when I moved away. Obviously we respected them as wild animals and didn’t try to force them to do anything (we taught them to let us bathe them mainly to avoid our dogs getting ticks), but as long as you’re careful and respectful, even nature can be surprisingly friendly.

I was told they moved on a few years after I did, when development of suburbs started happening right near us.