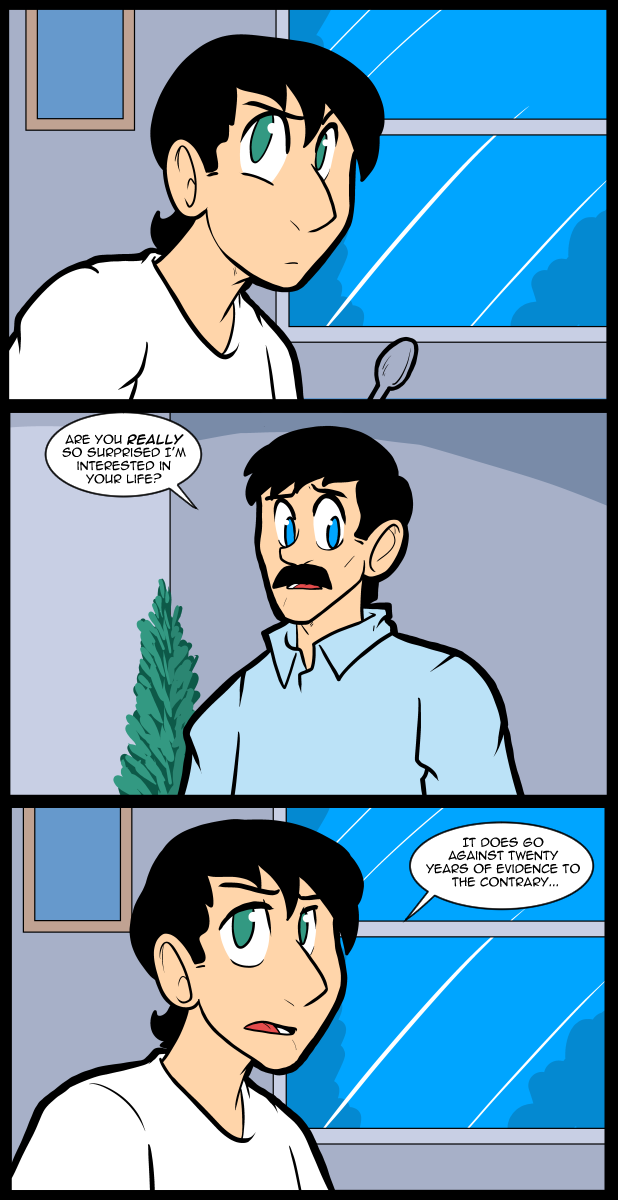 My instinct is not to let a scene like this breathe. With a slow update schedule it often feels wrong to devote a page to so little dialogue, but I wanted to hammer home the distance that Reggie takes as a given between his father and himself. This thing he did, which doesn’t relate directly to some kind of success he thinks his father will take interest in, doesn’t register as a subject for even casual conversation. While he thinks he’s done something personally worthy of praise his assumption is that it will mean nothing to his father. It should be noted that Victoria hasn’t mentioned it either apparently. Such is the strange dichotomy of the Boothe house. Striving for approval while assuming most things would not be worthy of mentioning. It takes time to learn that sort of behavior. Repetition. Minor awards regarded with little or no attention, over and over until they mean nothing. While you don’t want to praise people for every little thing you shouldn’t be so stingy that it’s never expected.

I comprehend Reggie for the first time.

I stopped trying to please my Father when I was around fourteen. That was the year I realized that nothing I did *would* please him. Ever.

In my case it was because he already had a favorite son, and he always made it clear that I wasn’t it. At fourteen I realized that my younger brother had moved me to the number three position.

Reggie hasn’t yet reached the place that I eventually did (late 20s) that I needed to make myself happy. I still haven’t found out how to do that, but Hopefully it won’t take Reggie so long to get to that place.

Reggie’s line in the last panel is super relatable for me.
I’ve had a terrible relationship with my half-siblings father, he never really wanted anything to do with me.
Fast forward to my late 20s/early 30s and I’m doing fairly well for my self. He tries to make it seem like I wouldn’t be where I am now if it weren’t for him, which is completely untrue. He also has this odd habit of trying to claim some sort of credit for any of my accomplishments, even normal things like getting my first auto-loan paid off, or moving into my first apartment. It just fells like he’s only interested in me if I do something that he sees as being something of note.
I’ve seen Reggie grow as a character and I’ve come to like him as I’ve learned why he is the way he is. This look into his relationship with his father just adds to that due to how much more relatable parts of his character are.

And on the parenting misery train, mom threw me away at 10. Now I’m terrified of being too distant for my kids, since I’m very reserved emotionally a lot of the time. Combined with depression, I have to work very hard to do what I think (hope) is good parenting. Try and let my kids always know I love them, but always feel insufficient. Am pretty sure I’m too critical and don’t know if I offer enough praise of their accomplishments. And no partner to keep an eye and let me know when I’m screwing up.

From my mom I learned to identify with Reggies view that is honestly (and privately) surprised that Mr Booth is remotely interested in anything Reggie has done. That it’s only because he was on T.V. really takes the wind out of even that small amount of interest.

I don’t know why, but I feel like Reggie’s dad has ALWAYS wanted to be part of or shown interest in Reggie’s life, but Reggie has been too influenced by his mother to actually notice.

I agree with you. Perhaps because he’s clearly trying to reach out here, or because he reaches out in the most awkward and unsure way possible. Reggie’s father clearly cannot relate to Reggie, but I would believe that’s because they never laid the groundwork rather than because he genuinely has no interest in his son.

I feel this way too.

It really seems like his dad probably always WAS super busy. I know like hell I am and I wish I could spend more time with my kids. I thankfully have a good relationship with them and my wife is a good mother. Here, I feel like his dad being busy coupled with a mother who likely was…. overly strict etc and probably didn’t even let the kids interact in a meaningful way with him. We haven’t heard much about his dad beyond being a business owner who works hard, and we do know he had reggie work with him. That may also have been his father attempting to connect because he really doesn’t know how.

We also know the rest of reggie’s family like his aunt are both scary and intensely driven, but I dont remember directly but feel she may have been his maternal aunt, so the other side of the family perhaps?

Sylvia Boothe. Comic 523
So either his father’s sister, or both his mother and her sister married a Boothe.

When I read the Patreon version of this, I thought that Reggie was skillfully using this situation to make a point of how little attention his father paid to him. It didn’t even occur to me that he might have genuinely thought his father wouldn’t be interested in his solving a decades-old puzzle that got him on TV.

Either situation is interesting. But it’s amazing that the author-approved explanation is that he really didn’t think his father would care.

If it turns out that the only reason his father cares is actually because he was on TV, and his father isn’t impressed or interested in the mystery-solving part of it, that’s even more messed-up.

My childhood home wasn’t 100% perfect, but it was a paradise compared to the Boothe household.

America in the 1950s was a toxic stew of masculinity. Fear, especially of Commies and (homosexuals) colored everything. Having curly hair in ringlets like Shirley Temple, meant I could never HAVE hair to style, it was always a buzz-cut. Fear of Teh Gays!
America of the 2010s did not seem to have learned to respect women any better than in the ‘50s but Dad-Kid Relationships Now seem better than long ago. It seems more OK to tell your kids you love them out loud.
My relationship with my father was fraught, fraught I say, with misunderstanding, but never, not once, did I feel unloved or that my accomplishments went unnoticed. This page explains so much, but kicks me in my guts with a muddy boot, for Reggie. I’mma go now, my stomach hurts.

The 50s were a strange time. People who became parents in the 50s grew up in a very different world.

I was born in the mid-50s, my parents were only 20 and 25 years older. But have much more in common, culturally, with my niece’s generation than my parents’.

Given the course that my life has taken, I view praise with both wariness and skepticism, for fear that someone will find something worth taking from me should I ever show the slightest satisfaction in what I have done.

Yay, everyone here is equally broken and used to sadness!

I know I am

I am very happy, and am doing well, … this IN SPITE of what the schools did to me. They messed me up right fine, but I’ve worked through it.
Good kids get Good attention, bad kids get negative and attention, and punishment. What does it tell you if you are a good kid, and sent to the principal’s office everyday?

I understand the urge to move quickly. It’s getting kind of dull. I mean, it’s clear that these two are awkward together, let’s carry on.

But I also understand the urge to really call attention to this because it’s the first time we’ve seen Reggie’s dad in the strip that I know of.

In other words, Jackie, take your time and do it right.

Agreed. I read the relatively ‘slow’ narrative here as important to the pacing of the dialog between Reggie and his father. I can almost hear the clink of the silverware and bowl as Reggie eats his breakfast between the pages and panels as his father stands there awkwardly in silence, both unsure how to handle this interaction. I sympathize with both of them and am interested to see how this plays out.

I think you made the right decision taking it slow here.

I go through periods of being very interested in this comic, and being sorta interested in it, but let me say: This is such a good scene, and let it rest only adds value.

It’s such an excellent characterization of Reggie, and a great introduction for his father that really humanizes them both.