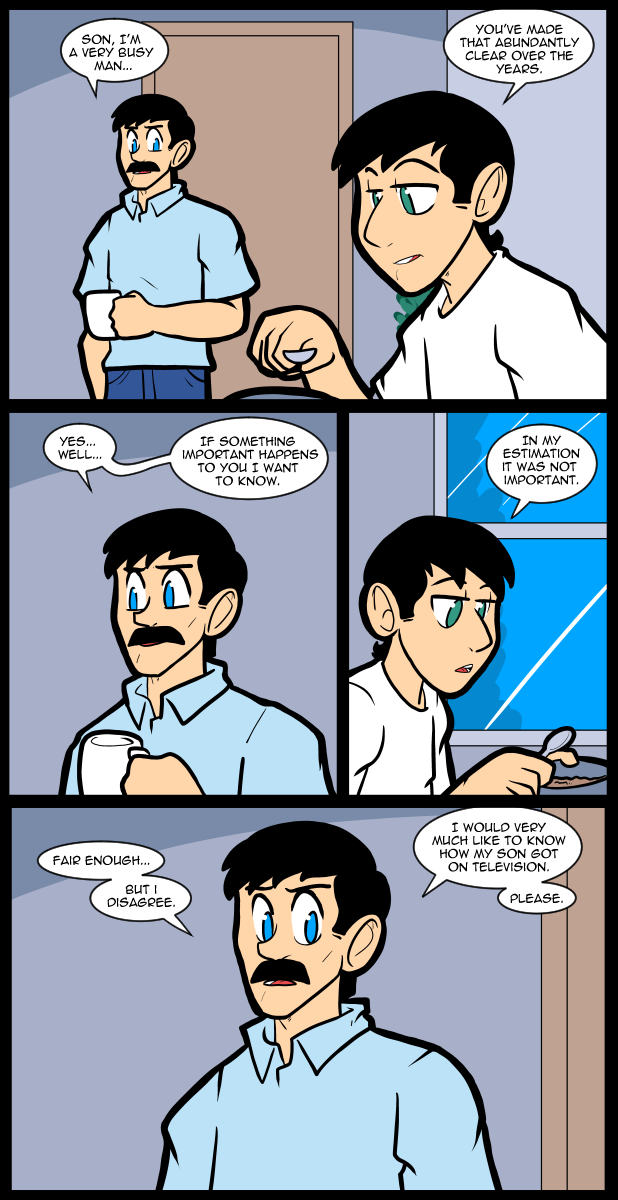 I have sought to mess around with how people perceive Reggie from the beginning. Introduce him as an antagonist, then flip the perspective & humanize him. I hoped that in some small way it would inspire people to think about the antagonists in their lives. Truly evil people are rare in the world. At least more rare than harmless ones… mostly harmless ones anyway. I think, as I look at how people interact with each other now that I have failed at this completely. Well, perhaps it’s more accurate to say that I never reached a large enough audience to make an impact. In any event I have tried to make Reggie sympathetic. He’s socially awkward, lacks confidence, & it manifests in behaviors that are counterproductive. His parents didn’t set out to create a child like that, but somewhere along the way communications became muddled. Or maybe it’s a chain of toxic behavior spanning generations. Or a combination of things too complex to truly say what any one cause is. He’s not a villain, he’s just a guy, you know? He has a code he lives by that sometimes he doesn’t remember to follow. Maybe he’s a little bipolar. We are all complex beings struggling to make sense of existence. Thinking about how your antagonist sees things sometimes, rather than painting them as inhuman in your mind, might help all parties come to an understanding.

I’m definitely enjoying your nuanced character of Reggie. His backstory is great, where he once nailed his hand in construction and once he and Jo lit a display on fire in retail… these incidents helped shape him and they are fun for us as readers. Yet he did learn some stuff while working in construction, and that helped him figure out the mystery of the hidden bunker. And Thomas sees him as valuable in his way for the retail operation. Like I said: nuanced.

I want Reggie to thaw out and become friends with everyone again.

And, let me just say: if (when?) he does thaw and become friends, it won’t be trivial; the comic is laying groundwork. I was happy when Jo thought about her interactions with him and realized she shouldn’t have thrown him under the bus about the fire incident. And she seemed genuinely happy for him when she complimented him on figuring out the mystery (“Mission F***ing Accomplished!”)

And of course Thomas has been, and ever shall be, Reggie’s friend if Reggie will accept it.

As always, thank you for making one of my favorite comics.

I’ll say it before and I’ll say it again. Reggie is the best character in between failures. He’s grown and grown and become a truly well fleshed out and thought-out character.

Problem is: Jo didn’t throw him under the bus. She froze and panicked. Reggie threw himself under the bus. Then got indignant that she didn’t help him out. Reggie is getting better, but the burning display incident and his resulting distance from the others is 100% on him.

Agree that many people that we just don’t get along with are not villains but just a result of a lack of comprehension on both parties sides. I’ve been there, both as injured and injuring party, accepted and given appologies.

There are, however, also people in this world who really do not care who they screw over, harm, or kill in their quest to get what they want. Sometimes there is a background which explains how they became this way, and sometimes they had everything (loving childhood) and still become, essentially, villains. Often they learn how to behave in a sympathetic fashion, and use this to portray themselves in a disarming light. But they will betray you, or you’ll see them do it to someone else. Make no mistake that once you see someone do that, that person has revealed themself. They will hurt more people again, and do it without remorse.

Sadly I think we have way too many of the former in jail, and because justice is founded on law, not ethics, we cannot always throw the latter in jail.

Thank you for taking care to portray such depth in your characters as it does make for a fun but also interesting read.

This is true. Hardly anyone is the villain in their own personal movie. The last time I actually looked up the stats about one person in thirty actually displays sociopathic traits. Just think of all the people that you know who are assholes. I’m sure a few of them would meet the criteria. Some people are just screwups or otherwise dysfunctional and they make mistakes. Somebody is describing mostly lower case evil. These are the selfish self centered jerks we deal with in day to day life. Then there is EVIL in all caps. Luckily, they are rare. I had to deal with a few of them in my professional life. Those that are less bright create havoc for those around them but tend to make mistakes and end up in the legal system. The bright ones, or at least the ones with some social polish tend to end up as politicians, captains of industry or presidents of home owners associations.
I doubt the Reggie’s father is a villain or even knowingly a bad parent. I would bet he is just another of those guys who mistakes his job for his identity as a provider.

“Son, I am trying desperately to prove that I am a human being and not a flesh-coated android. I figure the best way to do that is to ask about your day. I am told this demonstrates something called af-fec-tion. I am unfamiliar with this term so I may have mispronounced it.”

Also the pods don’t do all that well in this atmosphere….. [Donald Sutherland screech]

As someone who is often seen as the villain, I can sympathize. To tell the truth, we (I’m…. We’re a plural…..) used to hate ourselves, and definitely hated parts of Me. But therapy, and a lot of thinking, lead to having a better understanding of myself. Trauma and pain had a handle my mind splitting, and more trauma and pain would not help matters. I need to accept myself, and not think I’m “just trouble”.

Often the solution is either simply providing them with better tools to interpret and apply what they know, or giving them better information (though it’s really, really hard to change someone’s mind when they’re acting on personal experience.) The hard part is waiting for them to be ready to accept new ways of thinking and acting.

Honestly Reggie has been my favourite for awhile because seeing more of who he really is is so fun. I got the impression way back at his first appearance that maybe there was more to him, and I’m glad I was right.

Well, at least he has the courtesy to say please, as he apparantly understands enough of the situation that just ordering Reggie would not have the desired result.

Does he even know Reggie’s name?

5 stars, that was perfect.
Laughing my butt off.

I have life completely figured out. I simply refuse to share the answer.

” “I would very much like to know how my son got on television. please.”

Wow.
Not to judge this guy, but- to me, that’s a very formal, if not a foreboding, way to speak.

That’s like [ Thomas Jefferson ], or [an airport guard that I do not know], saying to me:

I do not know about this item.
Please tell me about this very small thing, that you call “an electric toaster”, can cook its toast for you.

(Proofreading my own comment) – …WHICH can cook its toast for you.