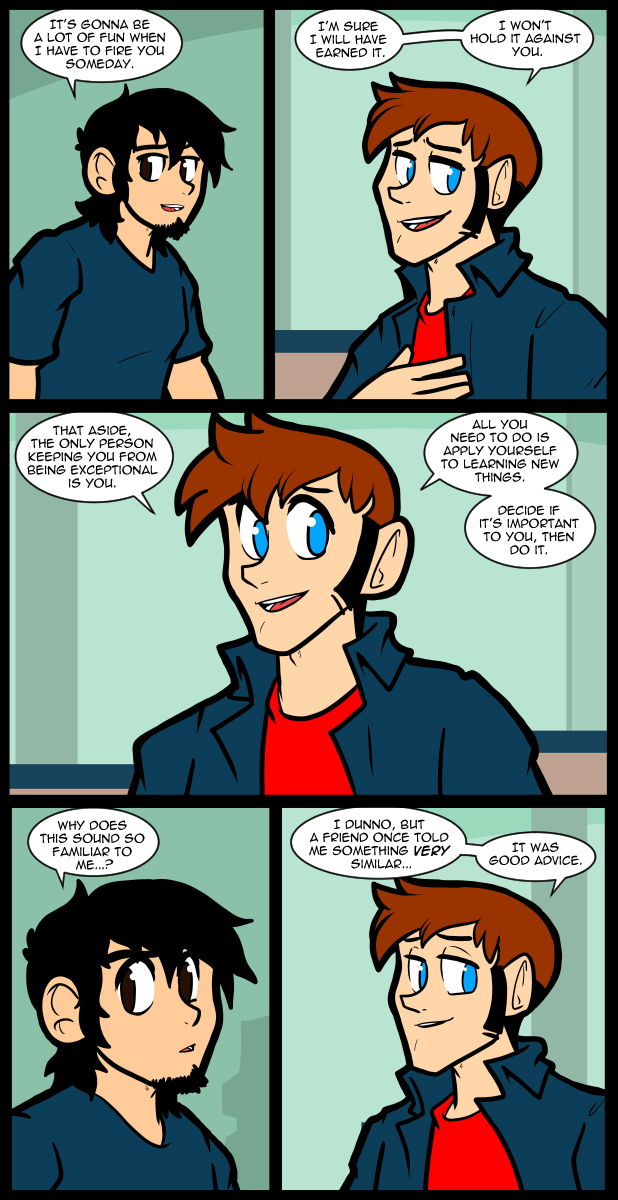 John has allowed himself to sink into a mindset where he doesn’t realize he already knows what to do. People do this a lot. They can see the way to fix other people’s problems, but from the perspective of the person who has a problem they can’t. It’s different when you’re in it looking out. The outside perspective of a friend I often what you need, even if they’re telling you something you already know. I don’t know what it is in people that makes this failure to communicate within ourselves happen, but I know it’s very real. Although he’s not saying the exact thing John told him many moons ago Thomas is basically echoing in back to him, modified for his situation. John has confidence in some areas of his life but also has a feeling of inadequacy in there too, jostling around, causing issues. Even when he told Thomas he could be anything he wanted he framed it in a way that set himself as inferior. Really though he’s not inferior, he just has a different set of traits from the people he admires & he doesn’t see his abilities as being as valuable as what he sees in others.

I dunno, seems like he’s managing both at once in that last panel, there.

I mean, this is something that is taught to us all, from the moment we come out of the womb. That our worth pales in comparison to others who seem exceptional. That because we do not immediately stand out, we are not as significant to the system.

Its one of the many flaws of a capitalist-obsessed society. If you don’t provide value in the capital sense, you are not worthy of achievement of any kind. It is an existential, societally memetic sadness that we are all exposed to by the time we exit high school. Even if the achievement you wish for is merely for yourself, the fact that it isn’t marketable or otherwise significant for making a living drives us to reject the notion we even could succeed.

A human must always endeavor to be useful to others & contribute to the well being of humanity at large.

Was that from Socrates?

If it was it came to me via my father.

Bill and Ted have ruined me. I will forever more pronounce that in my head as So-Crates.

Which likely, is found- in all types of: human societies, governments, and kinds of economies.

[ I’m saying that to no-one in particular.]

Crapping on capitalism as the source of the problem is shooting at the wrong target. Socialist-based systems are even worse at this (in practice, if not in theory). The most egregious examples, of course, are Venezuela and North Korea, but pretty much every socialist country is run by elites lording it over the slaves.

The real problem is human nature, and there’s not much we can do about that (outside of religion).

All of them bad. The only successful “socialist” societies are the ones that will tell anybody that cares to listen that they’re not socialist. Just higher social welfare with the taxes to match. What almost everyone decries as capitalism is crony capitalism, or corporatism which has more in common with socialism than real capitalism. Socialism has either failed or been spectacularly destroyed everywhere its been seriously tried. The differences between socialism and communism are basically degrees. In socialism, if you’re part of the group or groups out of favor, you’re rounded up, worked to death, starved to death and eventually executed. In communism, you’re already working and you’ll probably starve to death before they get around to executing you.

What you’re describing there has a specific name.
That name is on a political axis that is orthogonal to your capitalist/socialist argument.

That name is “authoritarian”.

So just like I said: whatever the theory is, in practice it always seems to end up in some kind of authoritarianism. By definition it HAS to. Otherwise the State (i.e. “community”)cannot regulate the means of production, distribution, and exchange.

I agree with most of that.

The magician, Penn Jillette, likes to talk about government.

Sorry, but that’s not enough to convince me that socialism is a failure of political ideology. The core principles center around mutual benefit for all which has to involve collective understanding. To decry socialism based upon the workings of totalitarian regimes is just pedantic.

This ISN’T the Cold War anymore!

As a society, a proper evaluation of character should determine which career(s) fit our passions best. But, companies don’t want to put in that investment. To them, it’s either your resume is attractive in the first place or its not. Apparently, internships or apprenticeships are now seen as money pits to businesses to which I find only further cements the catch 22 against school graduates.

I’ve been in John’s situation before (and currently, still kind of in now due to this awful year) and I know what it’s like to allow self doubt to get you down when you’ve encouraged other people out of their own self doubt. I think this is also what led John to kinda “concede” to Reggie when it came to Alex, and though I want what’s best for all these characters, I hope John can regain his confidence, find something that he does that he can be proud of, and maybe give pursuing Alex a second chance.

Welp, that’s it, I have officially re-caught up after binging the whole ouvre, (wich was sparked by wantint to re-read John’s original advice to Tom), and I gotta say, it holds REALLY well as a continued read (as opposed to a page-every-few-days format). I must commed you on the story! I thoroughly enjoyed it, and can’t wait to read 50 more chapters.

I’m glad it still holds up. I’ll keep working on the next 50 parts too.