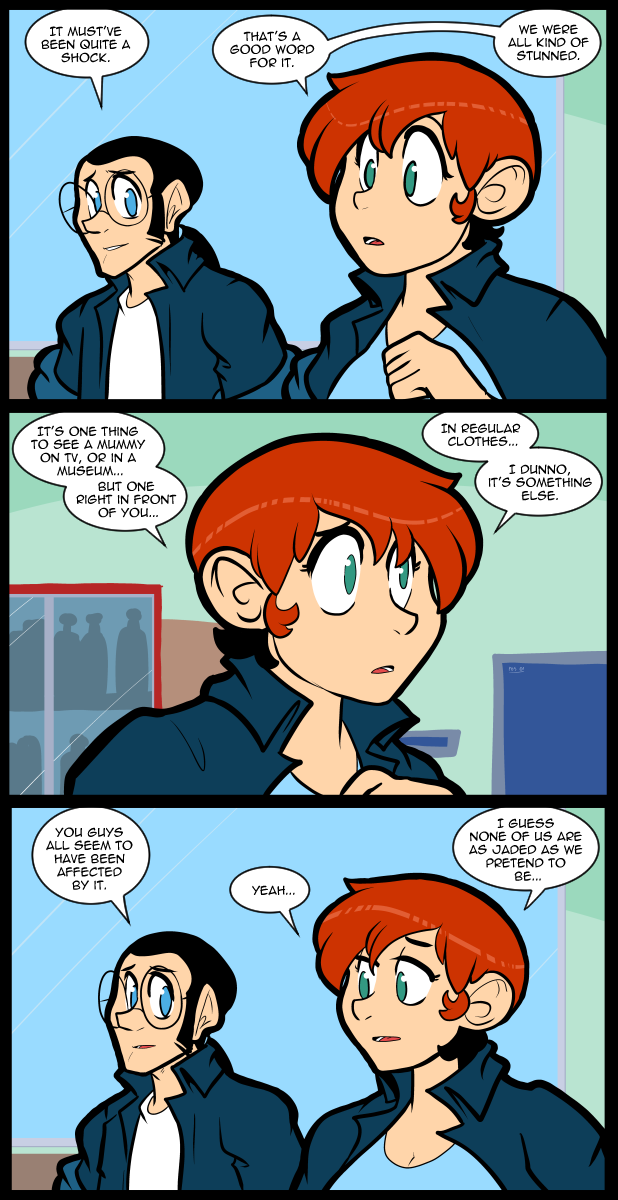 It’s kind of weird how context matters when viewing corpses. As long as they are in boxes, in special areas, it’s cool. Otherwise it’s a no go. I understand why it is, but it’s still odd. Plus it’s different rules for different people & occasions. You can parade a corpse down the street if they were extra naughty, or someone wants an example made of them. There’s a lot of elaborate corpse rules that you just kind of have to absorb from living in a society. On top of that the rules change arbitrarily from time to time.

I worked with a soldier back in the day & I remember him telling me that you can never tell how someone is really going to react to death in the moment or even months later. Sometimes the guys you think will break just shrug it off & carry out the mission while he toughest son of a bitch you ever saw falls completely apart. Sometimes you think you’re okay with it until you’re doing your laundry one day & you suddenly fall apart because you finally let your guard down & started to process watching your buddy die.

Everything is complex & simple at the same time all the time.

That kind of thought is a Brooskie thought. Like, if you want to know why she is the way she is it’s because I dumped this weird part of my personality in to her.

And the reaction can be different each time they encounter it depending on circumstances. I’ve had two inmates die in my care. The first was suicide, and I don’t know if it hit me harder because it was the first corpse I found or that he took his own life. The second was an OD. Likely nothing could have been done to prevent that. Maybe that was why it was easier?

Ever been to illinois? Sounds like a conversation I once with a co-worker while working at one of the local Wally Worlds.

No, can’t say that I have. Only ever worked in Kansas for other people.

Once was the first car onto an accident scene, me and a best friend: a Dark and stormy night, very wet but straight road. Three kids my age, too young for so much Alcohol, going too fast in a small car. We were there maybe 20– 45 seconds after the crash. Car off the road, Two guys out and about and in shock – stumbling around, probably concussions, definitely not coherent, … but the driver was in Bad shape, and while I was trying to get to a phone to call the cops and ambulance, the driver still wasn’t getting out of the car. The driver was still not speaking coherently. He was still alive – well,according to the paramedics- he was. I take that to mean he still had a pulse. Cause he looked like he was dead when they moved him out of the car. When you are twenty, and you see someone you think is dead, for the first time, it messes your mind for a while.

This was back in the days of pay phones; the drivers was conscious but incoherent when I went to call the paramedics. By the time I got back to him, he was moaning but not making clear words. He was pretty well pinned into place by the steering wheel so we didn’t try to get him out. While I was coming back from the phone call, Steve had the other two sitting down, there were upset also not feeling well. Cops and Medics got there and got to work. By the time Steve and I had given our statements to the cops, the medics had him on a stretcher, and going into the ambulance.

Whereabouts was this? Because I heard a very similar story from some fireboys (not to be insulting, that’s what we called the 2 rookie fire fighters that were always in the shop) in Vestal would’ve been like 2001, so I guess payphone era is out, but pinned in place by steering wheel sounds spot on. Damn, do even tragedies follow a pattern?

Mortality is always an abstract until, at some point, it becomes real. That point is different for everybody, so the reaction should also look different.

Interesting coincidence, nineteen years ago today I was murdered with a speeding pickup truck, no pulse or respiration until they tried to scrape me off the street. Told the guy closest to my head that I had broken the upper end of my femur so be careful. I passed out again right after I said that, regained consciousness in the ambulance enough to ask if they got the number of the truck, and then they asked if I saw the truck and I said it was too late for the bus to be running so it had to be a truck (it was a white pickup truck). Three months later I was mobile with a walker and back at work on limited hours, five months after the wreck I was “driving a stick” as we gimps sometimes describe using a cane. Eight months after the wreck the company shut the office down and sent our jobs to Mumbai and that was pretty much the last regular job I had, ever.

Life is weird, but it’s all we got. Glad you’re still with us.

Today would be my grandmother’s 109th birthday, so I’m always aware of it in a different way.

It looks like you should pronounce it- Broooo-ski!
:D

Love Carol’s nose in this comic. A cute face and a button nose, That’s nearly 70% of appearance.

never know till you know

First time I went out with an N95 mask I had trouble breathing normally. So I went with a lesser mask.
It was my apartment janitor had given me the N95 mask and she was upset I wasn’t using it. She said she didn’t know why but she felt responsible for me.
after a few daily walks (as ordered by my doctor) I improved to the point I could use tge better mask.
Just the exercise of a few walks made a big difference.
After that it was a matter of slowly extending my range. Overdoing it hurt my knees and ankles and set me back.

Your body tends to adapt to the demands made on it as long as you dkn’t overdo it. A physiotgerapist once told me to find tge point where it starts to hurt and stop just before tgat.