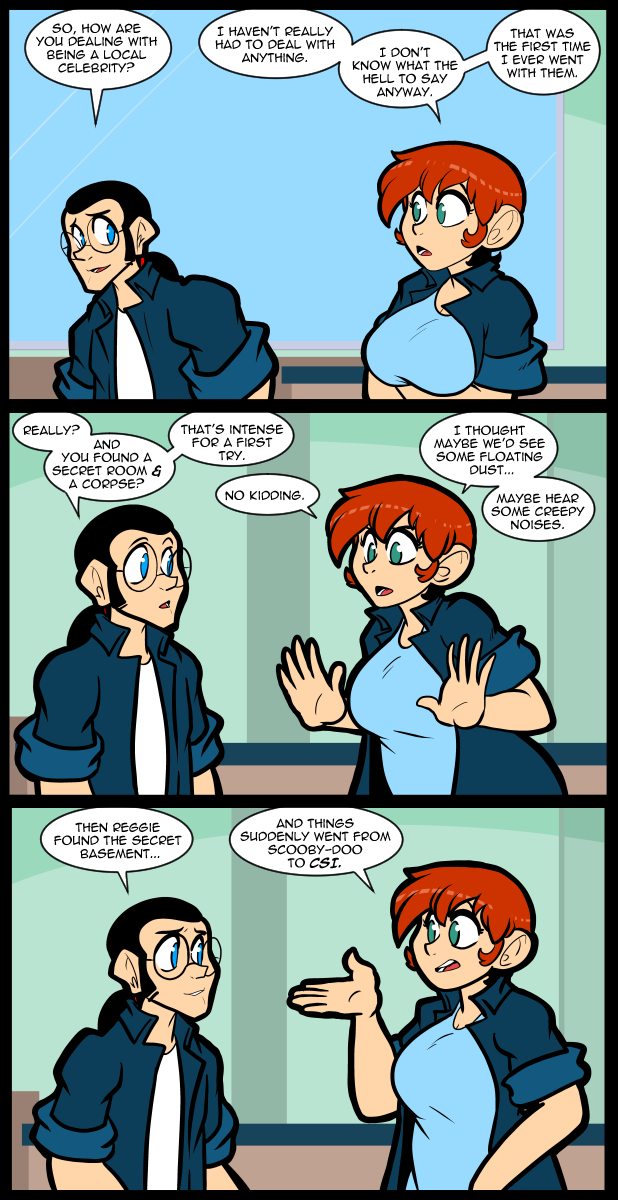 I went into a store again &, just like last time, I’m feeling sick. Unless I actually caught the cornelius virus there must be something that makes me feel this way every time. My theory is that since I have to breath so hard to get enough air through a mask that it irritates my airways. If things get worse I’ll see about getting checked out. Hopefully it’s just the same thing that happened last time. It’s also possible that my airways are just irritated by my cpap, which also happens sometimes. There are only 81 known cases of cornelius in the entire county so I have pretty good chances mathematically. In any case it’s annoying. Not as annoying as dying I expect, but I guess I’ll find that out later.

I’m just struck by how much better you’ve gotten at body language during idle conversation. The arts come a long way over the years!

In fairness I set the bar pretty low to start with, but thanks nonetheless.

I definitely like them being a jt more animated. Shows more emotion.

Also, is Carol looking thinner here or is it just me? She looks healthier while still being a bigger girl which is nice.

Wasn’t she also taller before ? Or is Ed taller than before ?

With no taller characters around it makes them look taller.

RIP Joe Ruby. The first series always was the best. The one with the UFO ghost was my favorite for the creepiest episode.

Scooby do was a part of everybody’s childhood

Was that the monster in the spacesuit, + the skull head? It’s helmet lights up when it laughs.
That guy always scared the spit outta me! :)

Had a similar issue with masking, turned out to be an allergy to detergent used to clean the masks. Changed materials and soap. No more issues for me. Maybe that could work for you? Shot in the dark.

I keep hearing about a device endorsed by William Shatner that works for such things.

I keep hearing about a device endorsed by William Shatner that works for such things.

lmao, I too have been referring to covid19 as the Cornelius virus, damn thatjunkman.

I’ve been calling it “The Mexican Beer disease.”

And I’ve started refering to pantry moths as coronamoths.

I hope you don’t turn into a Vampire. Crowing and stealing corn aside, Alexander Corvinus’ contributions are NOT to be emulated. Please feel better soon? Wishing you well, and hoping for happy resolution.

Deafening? I can imagine.

On a hot afternoon, you go out for a walk in the Nature Preserve (note: not jam OR jelly). Sure they’re noisy, but you talk over them. You get back to your car, close the doors and Notice your voice is hoarse and throat sore…. and you realize you’ve been shouting To be heard by the person you’ve been standing NEXT TO the whole time.

Advice I got from a nurse, make sure to drink water before and after using mask. That’s what helped me.

With all the crap on the news, when I get a full belly laugh out of a comic, it really makes my day. Thank You

From a poster I saw:

Assuming this is about masks, I question the, uh, wisdom of claiming as fact that masks, of themselves, stress the upper respiratory system.

Counter example: people have been wearing scarves, bandanas, hijabs and more over their faces and mouths for literal millenia, but only now that this has become politicized in the US are people claiming it stresses their respiratory system.

Anyone who makes such conclusions based upon arbitrary observation really needs to sit the fuck down. We’re dealing with a disease here. Playing politics doesn’t help either side.

All I know is that when I wear a mask resembling the type required by local decree I get dizzy, and begin to feel oxygen-deprived (like breathing into a paper bag for several minutes). It certainly stresses MY upper respiratory system. And, if they can be believed, those around me to whom I’ve mentioned this…

I’m a severe asthmatic and masks only stress my upper respiratory system when I’m either in extreme heat with one or doing something pretty strenuous, both of which are asthma triggers on their own anyway. If your body is that stressed out by a thin medical mask, you’re either a hypochondriac or you have another pre-existing condition, like Jackie does.

I work as a postal carrier, walking at a brisk pace (a little over two miles an hour) and after the first day or so you should get used to wearing a mask while walking or marching. Unless you’re from up north where you have to wear a scarf while talking long walks, you’re probably just not used to it, and in a pandemic “this feels weird” can feel stressful.

Disclaimer: Seriously, when I was a kid, one of the things which helped when I was having an asthmatic episode was cupping my hands over my mouth and breathing in and out. That’s really about all the effect a typical mask is having.

If wearing a mask is too stressful, consider wearing a scarf over your face instead. That may feel more normal, and not as stressful.

The cornelius virus makes me worry about Rudolph’s friend, Yukon Cornelius.
[ oh no.]

I was under the impression that the Cornelius virus turns you into a loudmouthed millionaire who indirectly helped invent potato chips! :P