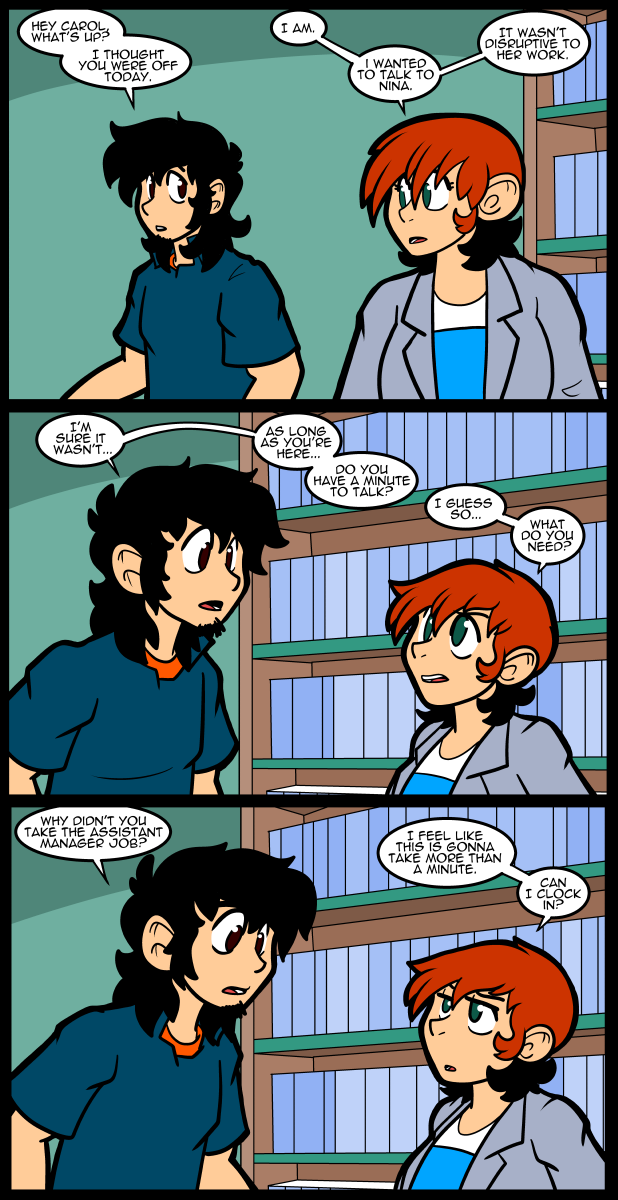 I could never go to my workplaces in my off hours because they would always try to rope me in to working. If not that then I would get asked questions and asked for advice, or other help, because I knew such a random assortment of information about everything. I also knew where everything was all the time because it’s just a weird talent I have. Even if I saw something out of place and didn’t stop to fix it I could remember the wrong placement without much effort. Not the most useful of skills in other areas of life, but in a store it can save a lot of time searching.

I know some people think it’s not that big a deal to get pulled in to work conversations when you’re off the clock, but at the same time everyone gets scolded for talking at work, so it kind of cuts both ways. In my experience it’s better to let people talk and be happy as long as they get the required tasks done. Happy people do a better job than browbeaten ones. Of course that means, as a manager, you have to exit the office from time to time and manage or even, god forbid, lead them. You don’t have to be everyone’s buddy, but you don’t have to be their enemy either. A balance between the two is good. Sometimes you have to bring down the hammer, sometimes you don’t. It’s something that not everyone is capable of learning.

Got a typo in panel 2

How is this a typo?

I think the relevant way to parse the typo is that it should “I am sure”. Hope that helps!

The construction is odd. I haven’t heard the phrase, “I sure it wasn’t.”
Is that slang? Subject pronoun “I” goes to verb “?”
Normally folks woulld say “I am” or “I’m”.
Any snark in this post is unintentional. I want to use language to communicate, not be a jerk.

I was blind to the missing AM in the original comment the same way I was in the comic itself.

It’s no big thing.
The philosophers, and Buddhist philosophers, say- it is always easy, in a busy life, to miss the big “I AM”. :)

Honestly, if the text had a comma instead of going to “I’m”
It would have read “I, sure it wasn’t.”
Or even better
“I… Sure it wasn’t.
The right kind of snark for a man afraid of Carol

I do my best to not go into work when not on the clock (not too hard so far, but now it’s the closest place I can buy groceries so we’ll see). I don’t even have basic knowledge of most item locations in the store, but I can only stand seeing so many coworkers when I’m off.

On the upside, most of my managers are friendly and no one really bugs me for anything, so I’m not really in too much danger of getting roped into free work anyway.

This is my last day at a job for a major tech company. Eliminate the first two or three that come to mind and you might even guess the right one. :) A lot of people at work have the company e-mail on their phones. My manager, for example, routinely answers e-mails at night and while on vacation.

I never put my work mail on my phone and nobody ever asked me to. Once I walked off the grounds, my job couldn’t follow me home. Now it never will. :)

I do that now, as well, as manager.

Really, it isn’t so bad to be bugged when I’m not at work, but I get compensated with the bigger paycheck.

Granted, I get called every now and then, not every day. Maybe … 4 times max on my time off. I catch up on email but I rarely reply unless it’s an emergency or I can add something to a discussion that will help the other managers (we support each other). Otherwise, I mostly enjoy my time with my family and play games. Having responsibility and a bigger paycheck is also nice – it’s nice to guide and coach people, and make sure they are happy and get paid (or what I call, “Making work tolerable.”)

On Twitter, Jackie has made a comment about- artists, [ + I guess, other webcomic creators], who want to be paid for their work/art.

I agree with that.
It’s like the comedian, Bob Newhart, [who did the 1980s TV show, named Newhart]-

It can be very hard, to do art as a living.
Bob Newhart became an accountant, so that he would have a job that would pay his bills, and buy his food, in the years when he couldn’t get a job in acting, or a job in films.

Or, another example is- Michael Caine, [who acted in the 1976 film, The Eagle Has Landed], was asked- why he was in some “badly written” films.
His answer was: [paraphrasing]- “Well, they pay me just as much, to do the BAD films, as they pay me to do the GOOD ones.”

After I fired/quit my job as a lower manager at a thrift store, I’d come in to shop and get roped into drama conversations of “what should I do?” and a lot of fixing mistakes the new night manager would do (like on the register) so I know the whole getting roped into work off the clock. >__< If they had completely closed down, I'm sure I'd still be in there answering questions.

I had a lot of that same thing at my previous work, only we went without a manager for a year or so and I had to step up to fill the role so chaos and despair didn’t overcome my group in the data center.

When the position opened, I applied. I got so close to getting the job only the Director of the group hired someone from his previous group to be manager because it was a comfort thing (“I know him, he did good work for me back then. You do great work for me now, but I don’t know you that well.”) I wasn’t mad at that time, because I understand that mentality. He even asked me to help the new manager get settled in and make sure we had a great transition. This guy was coming from the other side of the room (Distributed, whereas we were Mainframe Ops) and “would need some help getting a grip on how things work on mainframes.” Since I liked the Director (the guy was always up front and supportive, giving me what I needed to get the job done), I said “Sure. I don’t want work to get disrupted by a clumsy, incomplete hand-off.”

Guy comes in, I work with him to get him acquainted with everyone, give him some stuff to read, show him some of the work we do, etc. It seemed to be going fine.

Skip ahead four months. I don’t know what happened, but the guy starts showing up later and later for the shift (we worked from 7:30 PM to 7:30 AM). He also falls asleep in his chair not too far from where we are. He can’t seem to talk on bridge calls without sounding like he doesn’t know what he’s doing, always asking me to take over. He forgets everything I’ve told him, picks fights with other team members and literally leans on me for everything. I gave him one month to fix whatever shit was going on outside work that was causing this problem.

NOPE. He only gets worse, now blatantly surfing Reddit and other forums openly at work while telling everyone else not to be on the Internet doing anything. Then we have a major incident, and the guy fumbles it terribly because I was off sick that night. I came back to work, heard about how terrible it was, and ask my Director (privately) to have a sit-down about this. I lay out what I’ve seen, and tell my Director I’m not going to be the guy’s crutch any more. Director agrees – he’s also disappointed. Give it another month, I’m told.

A month and four incidents later, guy is still a colossal failure. One of my teammates did not get paid because the guy messed up approving payroll. Even worse, he blamed it on my teammate. I know what’s up because I can still log into the payroll. I go to the Director, who admits he made a major mistake hiring this guy instead of me. However, he can’t fire him now because it will look bad (for the Director). Now I’m disappointed, and eventually I leave to my present job at a different company as a manager because of it.

I learned that I can’t be anyone’s “crutch” at work. I’m too good at my job to do that and not get paid for it. There were … other things that caused me to leave, but that was the straw on the camel’s back. There was no way for me to get promoted. To my Director’s credit, however, he put in a great word for me when I applied for my current job, so I got the job due to his help. He felt awful, but he was between a rock and a hard place.

When looking for a job I always try to get one I rarely have to get near on my daily route just because I find it so akward to walk next to the people I used to work with, are you supossed to wave at them? Ignore them? Get in and talk? Ugh! I was not taught this at school

I just treated them like people and if I got sucked in to something so be it.