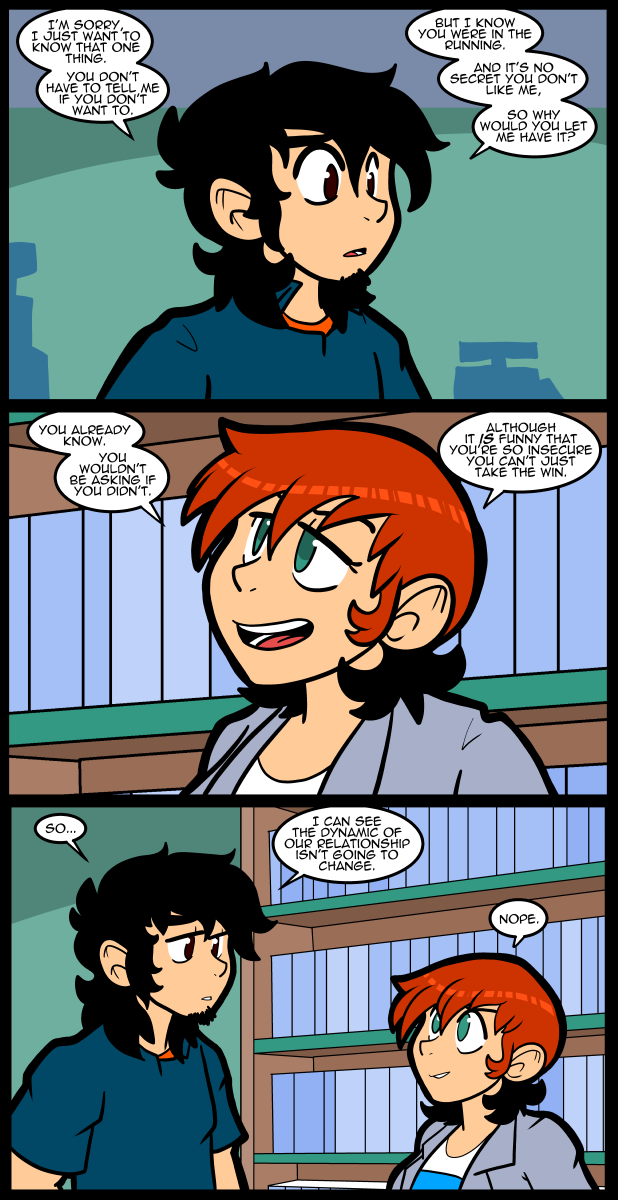 There are some scenes that I have had in my head for so long that I can’t remember if I’ve ever drawn them or not. As far as I can remember, without scouring the entire archive, John & Carol have never had this conversation, even though I’ve almost depicted it several times over the years, but I was waiting for the perfect moment. I think this is that moment. Reggie has had a similar conversation, and even Jo has touched on some of this, but the ire Carol has for John hinges on this bit. It may not be logical, but it is a real kind of gripe, petty in nature, that I’ve heard stated unironically. These very small struggles fascinate me. Sometimes our unwillingness to listen, or see things from the perspective of others, drag us down as much as the target.

John & Carol aren’t perfect. None of my cast is perfect, but it’s always interesting to see which imperfections people are willing to overlook versus the ones that are seen as unforgivable. People who hate Carol usually hate her for being a bully. She is. She’s not a good leader, or manager. Competency in her job have given her more power over time than someone like her should have, but she is slowly learning.

John doesn’t have a lot of detractors because he hasn’t had much time in the spotlight. Generally people don’t like his tendency to be superficial, but that’s about it. What they do like is his openness to learning and changing. When Thomas put him forward as a candidate for assistant manager it truly is because he knows that John is a survivor who can adapt on the fly the way few people can. Adaptability is a very useful skill and is less common than people think it is. Most people drag their feet in the face of change, but a few accept, or even embrace, it quickly. They get in on the new normal early. John is one of those people.

These two have to come to an accord, and these are the first steps.

In other news, my Xbox One can’t receive wireless signals reliably, so I rewired my whole setup so it could be wired to the internet. Now when I play Overwatch I can actually hit my targets. I had to do the same thing with Splatoon on the WiiU & Switch because the wireless signal just isn’t reliable enough no matter where in the house I am.
Anyway, Overwatch is fun when you don’t fail constantly. I hate that you can’t just earn skins, but I guess that’s the cancer of the lootbox we’ve all agreed upon as a thing we will tolerate.
I like playing as Orisa (if I misspell these name just forgive me, I haven’t put the names to memory.) Mercy, Brigette, Roadhog & Agent 76 at this point. I basically understand their roles in a game. Some of the others I’ve tried but I didn’t instantly understand how to make them work. I like Mei as a character, but I don’t understand, and haven’t seen, how to make her work. Since I’m new I’m playing with other new people who don’t understand what’s going on so they just run forward and shoot till they die & don’t stay on the objective. Every so often though I will end up in a group that does understand how a team should function and that’s cool.

The more things change the more they stay the same huh.

Bear with me it’s been awhile since I’ve played Overwatch, but can’t you get coins from lootboxes to buy the skins you want?

The chances of it are as terrible as getting something you actually want.

As Jackie stated – the drop rate is horrible BUT there is a long term solution outside of just playing more hours than is healthy – customer service and feedback to the designers – between the two, if the background hiss/grumble/whine reaches a certain level, they can hear you like cats to can openers.

It strikes me that John is also the one who would have the most use for having the words “assistant manager” on his resumé. Like, if the shop closes, like Thomas thinks it inevitably will, and everybody has to apply for new jobs, both John and Carol will now have the resumé that’s “best” for them.

If John’s resumé only said “shop clerk”, he’d probably only be interviewed for other clerk jobs, in other shops that aren’t doing too well either. But with his new job title, he could maybe get some kind of management job in some other field instead. It probably wouldn’t be his dream job, but I don’t really think he has any dreams, job-wise.

And if Carol applies for a new job, I get the feeling that she would come across as a very capable young woman who’s worked a long time at one position, but then realized that she can do anything she want. I’ve known a few women like that, in their mid- to late twenties maybe, and they usually do pretty well for themselves. If she’d been assistant manager for a short time inbetween, I don’t think that would make any difference.

In both cases, the important thing is that it *wouldn’t* look like they’ve just been coasting along at their dead-end retail job until it folded, it would look like they *decided* to move on.

I love how you take “real” people and give them lives, then explain how you pull the strings in your newspost.

Well, I have all this jump magic & dance magic around. May as well use it.

Re unwillingness to listen to people that are different: I just had this internal monologue the other day. that was a big thing for me. Now I would like to know what this syncing up of ideas means. Star signs? Sagg and some Pisces here.

I must’ve missed something, I wasn’t aware Carol didn’t like John at all.

She’s the least friendly to him of the entire cast. It’s been shown a couple of times at least.

The former will result in avoiding social interaction unless necessary.
If you have to interact, then civility will be at the minimum required, but with coldness, snark, sarcasm or other social cues layered in, while not being overtly hostile.
It is even more disconcerting for others when all this is said with an honest smile.
You can think of interacting with someone you dislike as akin to changing diapers – necessary but you will hold your nose – and for the same reason. =P

On the other hand HATE may eventually lead to the destruction of life, liberty, happiness for either party involved as well as collateral damage to those around.

I’ve only met a few adaptable guys in my life and while they probably won’t get a high end job, they’ll find the way to survive in a middle ground, it is a useful skill indeed