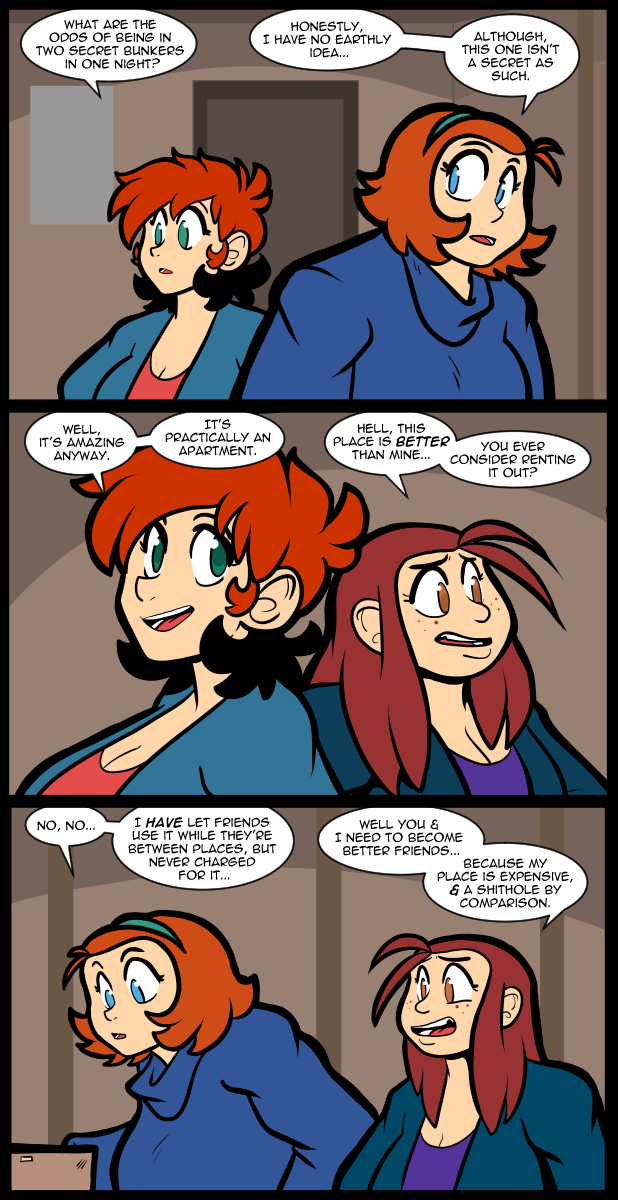 I suppose I could have put a little box with ” meanwhile at the library” but you guys are generally quick enough to pick up on a scene change.

It’s kind of strange how so many people are playing animal crossing after years of nobody caring while I was still playing New Leaf. Sine my life isn’t effected as much by the shelter at home orders I’m stuck not playing while everyone else does. It’s odd, but I’d rather it be this way than being able to play because I lost my job. I’m glad people at least have a pastoral game to take the edge off the tension at least.

Hey duder, someone on reddit found some hiccups with the site, lots of comic images double posted, and clicking the image takes you to the latest page, not the next one.

Definitely NOT an April fools joke. I came across it whilst playing “Catch-up” with the comic. There was a string of pages in a row that had double postings and then all of the sudden a single page, then more double postings.

The fact that so many characters crossed paths in this one story arc is phenomenal for the potential friendship hijinks later on down the line :P

So many redheads in one strip

I was just about to say that myself! We’re being spoiled. :)

I think Jackie has said Alex’s hair is kind of a brown or something, not technically red, though I thought so too, myself.

MEANWHILE, AT THE HALL OF JUSTICE…

Parting kiss averted by master storyteller. Or maybe just not shown. Not saying a kiss happened. Just that, if it did, it is currently unknowable. And I have hope for a future date happening. That is all.

Why would there have been a kiss? They didn’t even do a friendly hug. Maybe there’s some chemistry there, but it’s not enough for him to pick up on if either of them are even interested.

That said, sure, I would ‘ship them.

V: And at Halloween …
J: Yes?
V: Wear a Dracula costume.
J: I was thinking Tiger King but okay.
V: And make it a good one.

(Fades into the night.)

If you do a Card Catalog Capers comic, I’d read it in a heartbeat. Not saying you should or need to or anything … just saying If-then, else.

And who knows? Some old friends might stop by to wish her well.

She can start solving crimes from the library basement and be an 80s-esque TV parody the kind The Simpsons might have done when they were strapped for ideas.

The way libraries have changed in the last decade, anything referencing Card Catalogue would have to be listed under historical fiction or under 398.2.

Pardon, but- what is Card Catalog Capers?

Patricia is pretty insensitive in the last panel. Then again, Alex is probably used to that, since she’s friends with both Evrina and Maddison.

Yes, she doesn’t strike me as someone who gets offended easily. Quite the opposite, in fact. She’s curious, intelligent, and chill — people like that don’t waste time getting offended, because they want to see what happens next.

What is insensitive about what she said?

It comes off as though Patricia wants to use Alex for her own nefarious means. Basically be my friend so I can be living off your back for cheap.