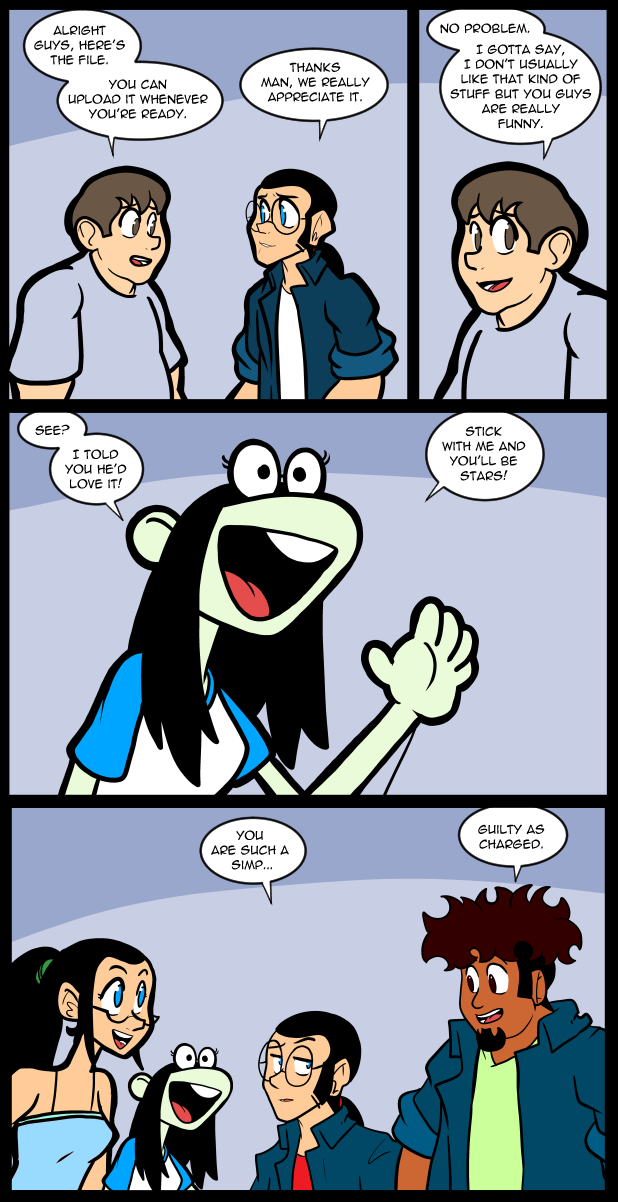 Dear god… I may have made her too adorable.

I’m gonna have to come back to this stuff later, but I think this is gonna be the end of the puppet arc for now. Unless I think of some joke I just can’t let get away. I have to admit though that I instantly wanted to write a huge thing with just the puppets, so that’s something to look forward to.

It amuses me that Mike actually took time to make puppet boobs. XD

I guess I don’t really have anyhting important to say. I’m gonna try and have a couple of nice bonus images up on patreon over the weekend since it’s been such a long time since I was able to do anything nice. We’ll have to see how I’m feeling though since I keep having this sleeping issue so bad. If you feel like supporting my work please use the links above to join whatever thing you prefer. For now I think I’ll see if cleaning up for a few hours makes me feel any worse or better. Catch ya’ll later

(I have to admit though that I instantly wanted to write a huge thing with just the puppets, so that’s something to look forward to.)

Oh, I am excited.

I love love love it so much that the two puppets of Edward and Jessica have a good bit of sibling resemblance!

As much as he protested Mike made them siblings anyway.

Is it just me or are the puppet’s boobs proportionally the same as her boobs? If so, kudos to Mike for getting that right

Yup. Simp. He realizes he’s wasting his time with her right? :p

He’s a pretty chill guy overall. I really don’t think he’s too wrapped up about her.

I wouldn’t object to a story arc where he met someone and started a romance. But it won’t be her.

That look of childlike wonder on Jess’s face is sending me. She has found her true joy in life and it is playing with puppets.

How long until Brooksie has a puppet too? I feel like she would get swept up in Jess’s exuberance for this.

I have to admit, I would unironically love an entire comic focusing around the puppets. Something about how you’re doing this really sells the concept.

That puppet is too wholesome lol

I know she probably made a puppet to look like Ed’s puppet… but the thought that its just him but with a wig and falsies is SO funny too.

This future future is getting out of hand. Is it awkward to accuse someone of simping for your sister?

*”This future we’re in is getting”

“It amuses me that Mike actually took time to make puppet boobs.”

I don’t remember who or when this was, but a few people interviewed the Jim Henson/Frank Oz people about things like female muppet/puppet anatomy, and someone said, “Well, we had a discussion on about how big was too big for Miss Piggy’s chest, and (I think they said Frank Oz) said, “Hey – they’re just muppets. Fake foam animals and people. She’s a pig. Whatever makes it easy to tell she’s a female. Don’t get hung up on it.”

That’s all I had to add.

This has been a lovely ride. It’s a shame to stop here. However, the notion that we’ll return is quite thoroughly exciting.

Where the hell is this strange Times Between bus going next?

The puppet arc was enjoyable, funny, and imaginative! I liked it a lot.

I really enjoyed this filler that turned into an entire arc, and I look forward to it coming back sometime in the future.

Yes, the puppet episodes indeed form an arc. Despite your calling these interim episodes ‘the tims between’, your longing for coherent narrative is assertng itself. I’m looking forward to what you’re coming up with next.

Just wanted to say, that this looked like the perfect place to put this story down. It had a great arc and left it open to further hijinks later!