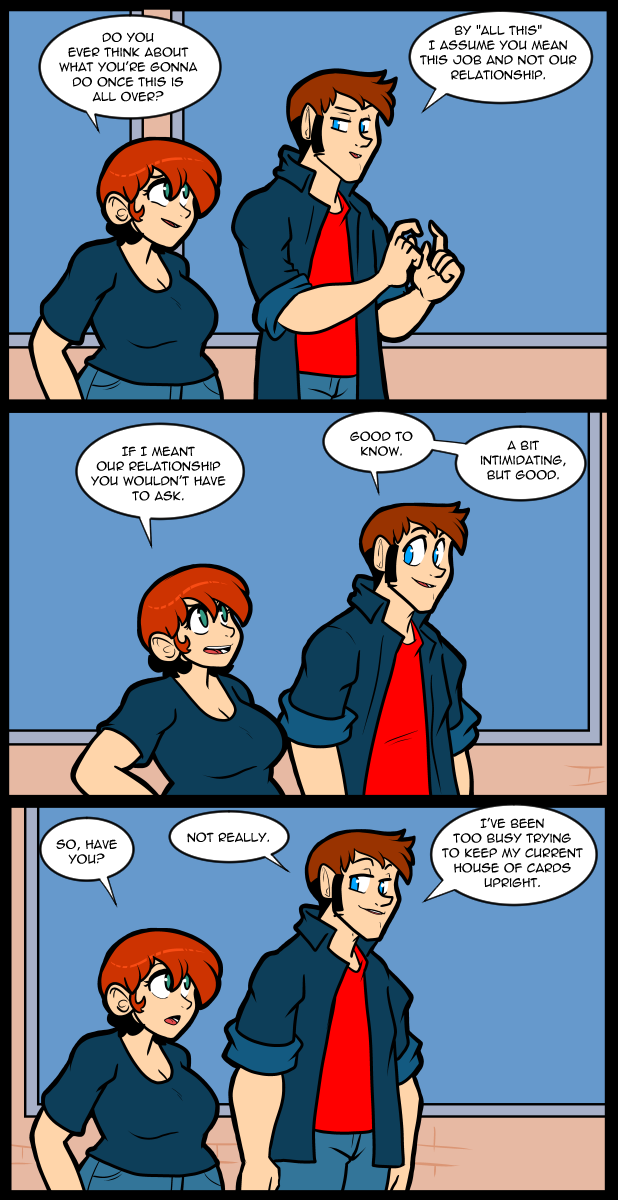 I kind of wanted to try jumping back into the story properly, but I decided to just noodle around some more. I’m still really off kilter and soon it will be Xmas & new years. I need to sit down one of these days and reread my own archive just to refresh my memory. I’ve been so bombarded with emotional things my memory just isn’t what it used to be. On top of getting older as well.

For someone like me, who is basically crippled if I can’t manufacture a sense of control, aging is an existential horror. Not because I’m worried about my appearance, but the deterioration of my mind. Especially after being in such close and continual proximity to my grandfather my fear of mental decline has only increased. My grandfather was an infinitely charming man. People loved him. He never met a stranger. Now he’s this hollow shell of himself and the brutal reality of that is crushing. I have to hold the thought of it in the surface area of my mind because thinking about it in any deeper place sends me into a spiral of misery.
Grandma was in a highly medicated state for a few years before she died. It was a similar thing. She was a bit off, but not like grandpa is now. Be fore she died they lowered her medications to the point that she was essentially completely lucid for that last couple of years. She didn’t even believe us when we would tell her what she was like when she was all drugged up. How could she know though? She was all drugged up.

Everyone is kind of off this year since Grandma was like the focal point for our extended family. We’re dealing with it in our own ways. Sometimes I wish I could be like my dad and just accept the reality of life while still enjoying life. He lost his dad when he was 16, so he’s had a long time to gain perspective. Although I suspect he’s just built differently inside as well. We’re almost complete opposites in that respect. He never bends, but I survive by letting myself bend basically to the point of being perpetually broken. From the outside at least his way seems better, but I can’t emulate it. We can’t really be who we aren’t at our cores.

I suspect I’ll figure things out as I go and just keep soldiering on. “Get busy linin’ of get busy dying.”

I’ve seen that decline in my father. After he died, my understanding was “He was ready to die, but he didn’t know it.”

“Once all this is over.” Yes, the writing is on the wall at the soon-to-be-shut-down Megatainment monolith, isn’t it?

The writing has been on the wall since the start of the comic.

I don’t know if you intended to type Ed-mad Future instead of Ed-mas Future, but it still seems appropriate.

I absolutely love this comic, and as much as I want to see more of the main story I understand Being limited by forces beyond Your control. Just know that you have a lot of fans out there who love seeing your content, I for one will take what I can get and just be happy that you are still willing to put in the effort on this.