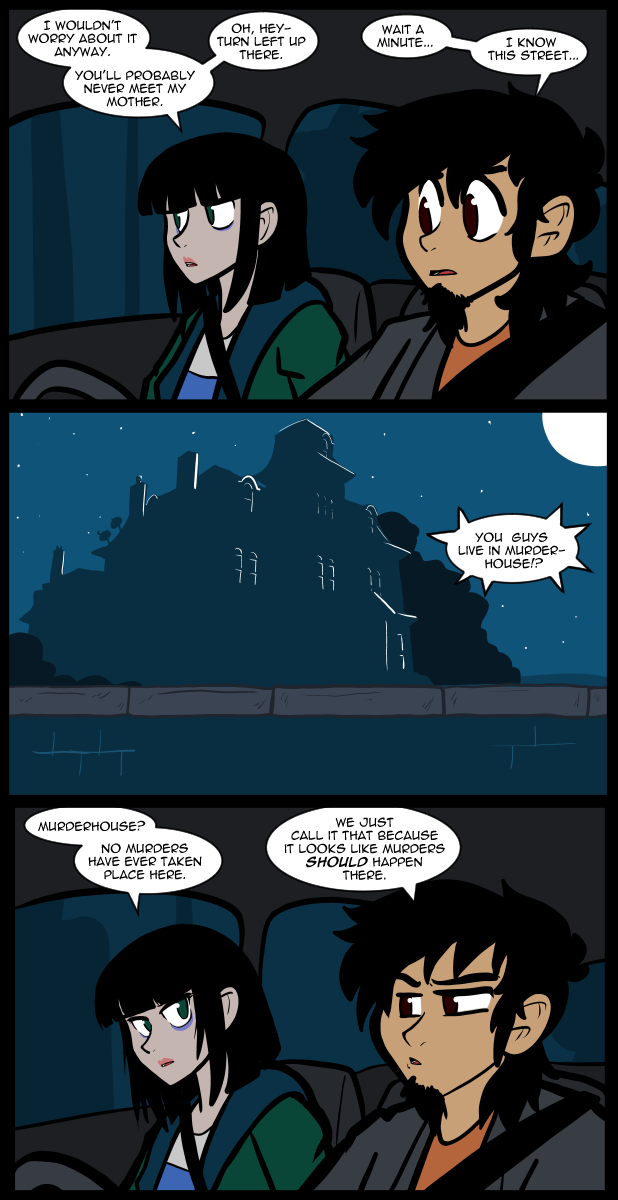 This page is kind of a nod to a joke I had with my younger cousin who used to live with us. There’s a creepy house between our house and the store that I called murderhouse as a joke, because it looked like a murder should’ve taken place in it. Just a dumb joke but whenever she visits and we drive by we still say “murderhouse!”

One evening we were driving by after sundown. It was fully dark out. As we got to the tree line the old man who lived there happened to step out & spooked us good. He wasn’t trying to, he was just watering the trees, but it was an entertaining moment.

Anyway, I just wanted to establish exactly what kind of conditions Reggie & Victoria come from. It’s been mentioned but never seen. It’s a literal mansion. Not the largest there is but by old midwestern standards a rich people house.

Victoria’s house…is Victoria(n).
Yeah, I can see that happening. :D

So does this mean we’ll finally get to meet Reggie’s family? This could be fun.

There’s a reason why there’s a page on TV Tropes called, “Tempting Fate.” If we’re about to meet Reggie and Vicky’s parents, I’m all for it, particularly if they’re the oblivious;y embarrassing kind, those are always a classic.

Can Dog The Bounty Hunter be the new version of “Cousin It”?

(Raises hand.) I thought of that in a nanosecond, too.

So do Reggie and Victoria live with their parents or were mom and dad like “oh yeah, we’ve got this old mansion out in the country for tax purposes, why don’t you two stay there till you get on your feet?”

It looks like it should host a Scooby-Doo Mystery.

There was a house on the way from my childrens’ grade school and home that they assured me was haunted. It’s still there, aboutntwo decades later.
Oddly there was another place on the the way that actually *was* used as a set for a horror movie that they never remarked on.
I had been thinking of buying it. The movie was made there while it was on sale; I had gone in then to look around, and it had a lovely large space in the back that was laid out like a church. Alas, the price was way too high, and the people who finally did buy it demolished the church-like space.

I have forgotten. I do know I never watched the movie.

Having lived in a Victorian house, everyone assumes there will be ghosts. Our house was one of the favored stops on Halloween. My son always swore that one of the rooms was haunted despite the fact that we reliably knew that no one had ever died in the house. My next door neighbor was a direct descendant of the builder. His mother had been born in our bedroom but no deaths. It also had a “murderhouse” basement. There was a steep spiral stair leading down to a couple of rooms lit by a single bare light bulb. On a practical note, don’t take on a do it yourself restoration of a big old house unless you are ready to give up all of your spare time for the next 20 years.

“No murders have ever taken place here.”

“You sure about that? Because you certainly look like someone who would live in a house where people have been murdered.”

In my state one can’t sell real estate without disclosing if something infamous has happened there.

I am very on board with this house having been in Reggie and Victoria’s family for so long that this question has never been officially asked.

Since John was promoted to Ass. Man. he should have access to employee information, so if he didn’t lack curiosity, he would already have known where Reggie lives.

He’s been promoted?
So now, is he like Cosmo Kramer – The ASSMAN??? :D

That has been one of the recurring plotlines in this comic. It started in 987 when Mike offered to make Carol the assistant manager, but Thomas convinced him that John would be the best person for the job. In 1453 John took the management test, and in 1834 he actually became the assistant manager. Then in 1839 he found out what Thomas did and was unhappy about it. In 1866 Carol managed to convince John that he really deserved the job. In 1932 Thomas pointed out to John that he stil has to earn respect.

Of course.
That was a try of mine to introduce a note of humor into the discussion,
by including the “Cosmo Kramer…the Assman” joke, from Seinfeld. :D

You can see more on that, here:

I think it’s the natural color of her skin, but- because of the blue shapes below Vicky’s eyes, when I look at her- I have to remember that’s just how she looks, and she’s not always [squinting unhappily at something], or [looking at something with a furious glance].

Sorry if this is the wrong place for this question, I have no idea what *is* the right place. I’ve been enjoying re-reading the comic while we’re all shut indoors but just had to stop at 1500 because it was driving me up the wall.