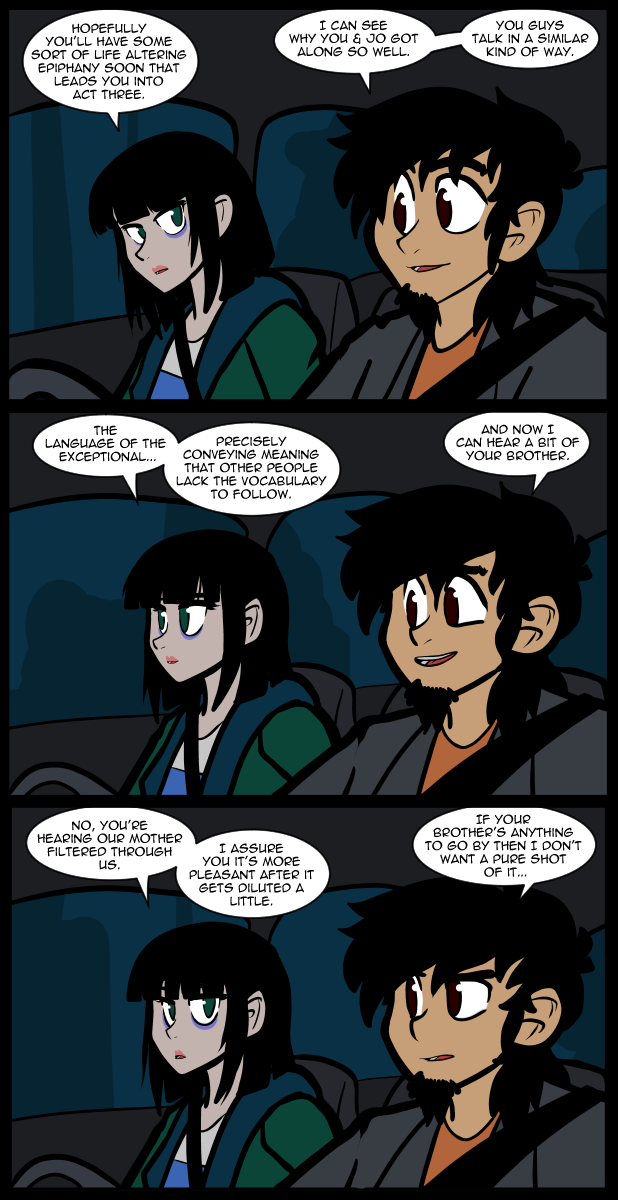 Well, here we are. Another day another page with two random characters having chemistry that is not necessarily intended by the author. Par for the course huh? Let’s continue wondering where this is going together.

In other news, LEGO has put out their latest in a long line of attempts to draw in more female customers. The Friends imprint has done very well, but they’re always looking for the next opportunity. DOTS is the new offering. Simple build for things like pencil holders & whatnot that you can decorate with 1×1 tiles. Each set comes with some of them, but you can also buy bags of random assortments. They aren’t blind bags, so you can, potentially find the specific rare charm you want if you put in the effort. The “charms” are, essentially, emojis printed on 1×1 circular tiles. You get 109 per bag. 10 of them will be randomized charms. It is a very girly idea in the traditional sense. That said, 109 1×1 tiles, in a fairly consistent color arrangement, makes for a great way to decorate any build. Tiled patterns make great floors. There’s an even mix of warm and cool colors in each bag. The are a bit on the saturated side so they do lend themselves to being added to Friends style structures, but with a good eye I’m sure a person could make them work in a variety of settings. I picked up 3 bags just to get a feel for the line. If I was in charge of things I would have separated the shades by bag, or offered warm or cool assortments. As it is now about 50% of the 300 parts are colors I don’t like. Of course I may make something in the future where I’m glad I have them, you never know. I do have a reasonable selection of the warmer colors in my parts boxes. I can also see using them as decorations for a lazer tag build, or an arcade. Maybe a salon of some type. I’m curious to see if the line has legs. My gut tells me it doesn’t. These types of ideas have never worked in the past, but maybe this is the one. Honestly I think some of the older attempts, like Paradisa were ahead of their time. They might do well now so maybe this decorative concept has finally found it’s place.
I would actuallt really like to get my paws on some of the vacuum formed baseplates from Paradisa sets. They really appeal to me. It was a resort theme so they tend to be beaches and hotel floors. I love the pastel green a lot of the sets used. It’s brought back for DOTS so I have more access to the shade than before. Although I can’t say for certain it’s the same color without having some in my hands. The images online vary enough that I’m not 100% sure what the actual shade of green is, I’m just guessing that it’s a formula they already had available.
I’ve almost bought some sets on ebay because you can still get unopened ones for reasonable prices, but I’ve never actually done it. There were several very small builds. Single figure, 20 or so parts, that would be fun to get just to say I have one. I actually really like the oddities and failures. Who can say why?

“You’re hearing our mother filtered through us.” She knows herself and she’s reporting on it accurately. I like this so much better than “Nuh-uh! Take it back!!!”

“…it’s more pleasant after it gets diluted a little.” Wow, quietly erudite… and a very deep cut. I’m pretty sure I’d enjoy talking to her, if she didn’t get bored of me and walk away.

You never know how well certain characters go together until you see an audience’s reaction to them. To give a time honored example Stan Lee had always intended for Gwen Stacy to be Peter Parker’s true love, but soon realized Parker’s chemistry with Mary Jane Watson was both undeniable and unstoppable. Regardless of how things work out with Vicky and John (assuming anything between them DOES happen, fingers crossed) it’s really nice to see that she isn’t just a satellite to her brother. For that, I commend you.

It is the thing that I like best; Jackie’s characterizations. They are subtle and deep, and play well with each other, even when they’re fighting.

I’m not a big fan of shipping characters, but I almost hope this becomes a thing simply so we can see Victoria more often. She’s one of my favourite characters of yours.

On the DOTs thing – I was at a local Brickfest last fall [ an attempt at the resurrection of a previous long running local event ] and I remember overhearing a conversation between some hard core builders make mention of tiles coming out and putting together a …. I for the life of me can’t remember what it was called … a LEGO based mechanism to assemble pixel art panels based on the Real Colour ™ of the pieces available in the supply bins.

Gotta askm Jackie. Are you watching LegoMasters? Its definitely a different take on reality TV competitions.

I find that kind of show annoying. I’d much rather watch some random guy on youtube going over his original builds than some kind of competition.

To be a grammar nazi, there should be a comma after by.

Other than that, I love the comic, and keep the good work going.

“Not being the protag sucks. All I do is hand out in the background, give out sage advice, have a cool beard…. oh shit, I’m the mentor! I’m not going to make it past Act 2!
“Calm down dude.”
“Don’t tell me to be calm, I ain’t ever going to see Act 3! I wear sweat robes, I’m super old…”
“Jesus dude, you aren’t even old enough for a mid-life crisis”
“..ancient I tell you. I don’t want to die heroically!”
“That implies that we would be devastated by your passing”
“…. Gee thanks. Now I feel so much better.”

Heh heh heh, I really loved this one for some reason.

Victoria’s winning me over simply by her looks and snark.