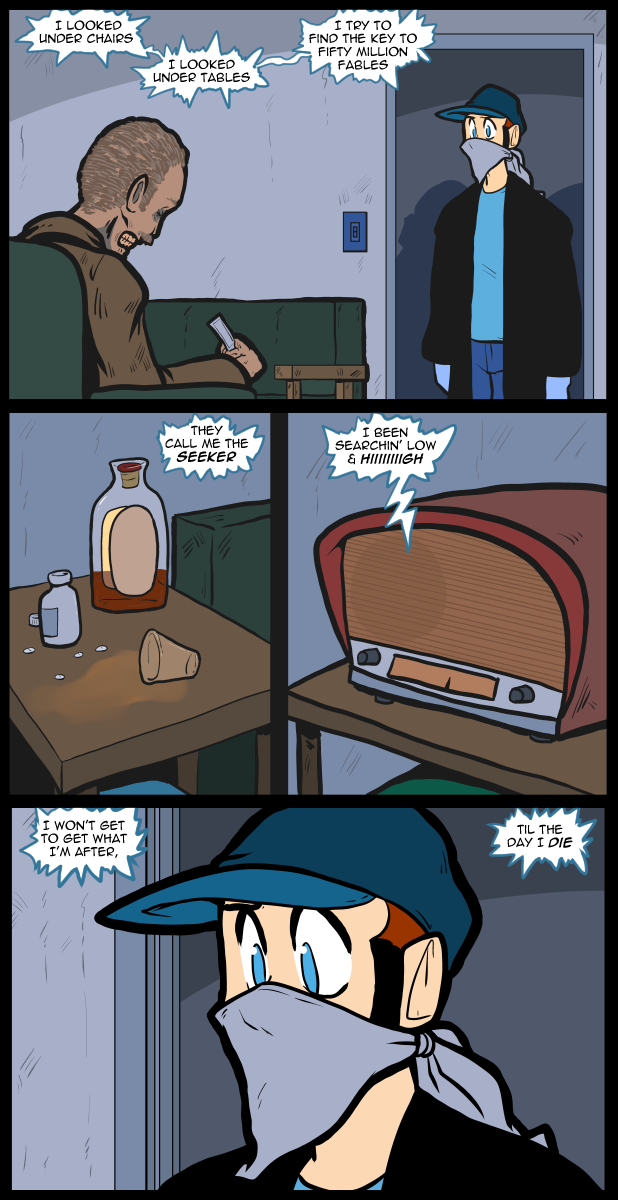 Well here we are. I’m not gonna write a long thing because I’m not feeling well. You guys can put together this on your own anyway I’m sure.

I like how emotional this could potentially be for Thomas. Combining his nihilism with his drive, I think this strikes at him.

I agree with you there, mainly because it triggered a little existential crisis within myself as I never quite thought of the lyrics to the seeker this way till now

This sort of looks like a suicide to me.

Yep. Corpse clutching rolled paper, possibly suicide note. Pill bottle, possibly painkillers by the style of bottle (though I’ve no idea if that style held true for the time period). Mostly empty jug of booze. Very likely suicide or at least made to look like suicide.

The cup being overturned is a curious detail, so I guess we’ll see what the note says, and what Thomas thinks.

I have a reasonably strong stomach but I really appreciate that Mr. Corpse is faced away from the reader’s view.

Definately pain killers, judging by the size snd style, and the pill shape, some kind of controled substance possibly morphine or something, mixed with that much alcohol, i think you might be right on the suicide.

The thing in his hand looked a little more like a harmonica to me.

If you look near the overturned cup you’ll see the table is discolored. The guy dropped the whiskey glass and it spilled, eating into the stain on the table.

**Turns off radio
“Hey; I was listening to that”

…English really needs a verbal shorthand for “this thing made me feel genuine emotions, and even if the emotions themselves weren’t pleasant, the fact that I felt them is both good for me, and a mark in favor of whatever made me feel them.”

It gave you the feels.

“Catharsis” is a half-decent fit for this. It usually refers to the “cleansing” feeling of “negative” emotions produced by well written tragedy.

That particular song happening to be playing on the radio… coincidence, or genius writing? If Thomas knew he was in a comic he’d agree with me, it’s genius writing.

Great job on this comic. Again!

I wonder if that guy died listening to rock, or if that radio frequency had something else on it back in the day. Maybe it was golden oldies or something.

Eh, you oversold the grossness. He barely even looks dead.

He looks like a mummified corpse. How you react to that is on you.

I was worried about opening the page, but this is fine, I’ve seen far worse. The angle helps a lot, I’m sure. And I’m glad this whole storyline turned out to have an interesting mystery which isn’t an actual ghost story. :) I don’t like spirit nonsense.

He appears to have dessicated rather than decomposing, probably due to the sealed and dry environment. Take another look at his gums (or lack thereof) and tell me he looks anywhere near alive.

Yeah, Daltrey and Townshend nailed this one.

Him, thinking of building up all of these [doomsday stocks], + the belief that he might be the only one who will survive a nuclear war, I think, could make him incredibly sad.
I’m asking that everyone that feels suicidal get help to stop themselves from doing that, but-
if he was feeling that a war would happen, that would leave him alone forever, I can kind of see how very unhappy that would make someone, down in this bunker. (That was a very long comment. Sorry about that. That was not intentional.)

Just as Thomas leans in to take the note out of the corpses’s hand, Rulette says “You know, if this was a gaming session I was DMing, that thing would be a lich, and it would slay you the instant you touched that paper.”

There’s a border on what he’s holding. I’m betting on photograph.

Now that you mention it.

It makes you think that maybe he built the shelter for more than just himself.
What became of his paramour is to be revealed latter this week – I hope.

Would be a strange twist if the subject of the photo was someone related to our gang of trepid explorers.

Jackie, I enjoy that you put the speaker detail on the radio.

It probably isn’t going to be relevant to the story but I am wondering how the corpse got so nicely desiccated. Low humidity and airflow are best for the process but that isn’t all that likely in a basement. I suppose if the building was in a relatively arid location that would help the process.

It’s a fallout shelter, so if the builder was smart he would have sealed it any way he possibly could to keep out radiation and other nastiness.

Filtration is the key for a shelter. I’ve had opportunity to poke around a decommissioned Atlas missile site. The air handlers were enormous. Those things were built to survive anything short of a direct hit but you still had to have airflow for the people in the control room.

I don’t recognize the lyrics… can somebody point me right?

It’s the title of the page

Oh,well done, Jackie! Oetszi, the Iceman was grosser. Well done! And still this is totally creepy. Dead bodies is never a fun time, … unless it’s on the job in private, IE: not in front of relatives. You should hear the night-nurses if they think yer dead, or comatose.

I’m guessing that they will never know for sure what went wrong, here, but maybe they will come pretty close. Not sure that it’s important, … though I have ideas for plot twists, I will keep to myself. :—)

That’s interesting- it looks like he spilled the pill bottle, but he corked the bottle of whisky.
Maybe- he wanted someone to later find him/ his body. Also maybe he wanted someone find his whisky, and have some of his booze + supplies.

He’s a survivalist, so I think he liked saving things, so they can be used, later.

Also, even in the most humble of people, I think everyone likes to show off a little, or at least [most people] like to show off that [that person] did a big amount of work.
Probably everyone wants their work to be seen.