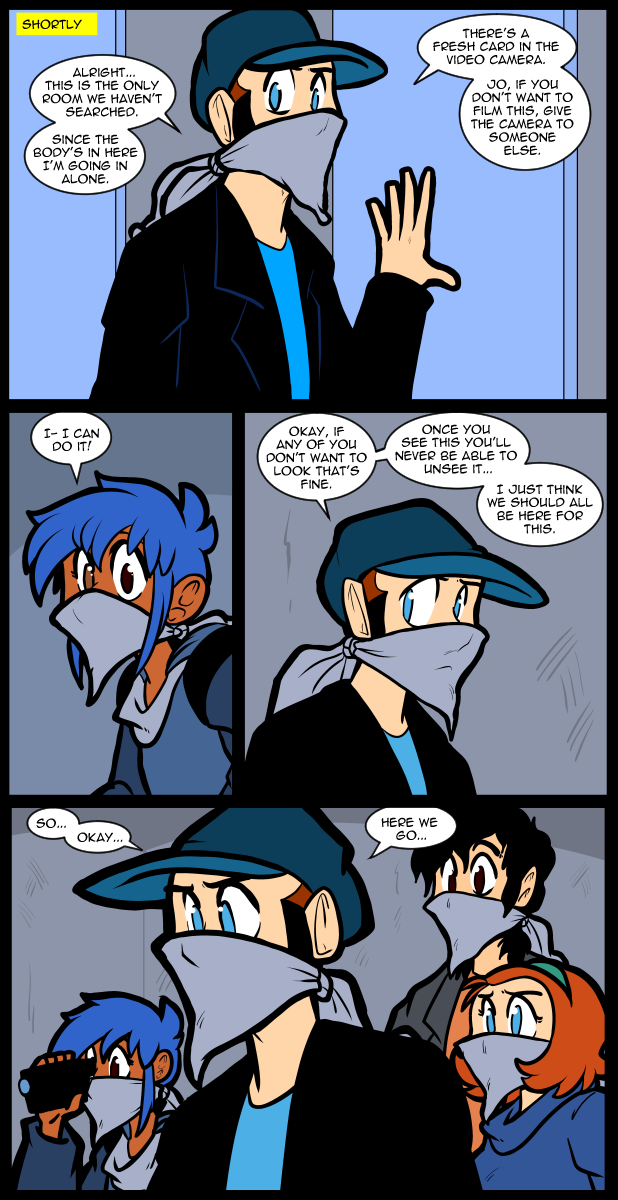 Nobody can complain when the next page arrives & it’s gross. It’s been made clear what’s gonna be in there. Brace yourselves.

In real life news, when we came home from the store today there was something really wrong with Roxy. Mom rushed her to the vet & found out she has heart failure. We got some Medicine to help, but if it doesn’t then we’ll get a little more. If that doesn’t help… Well, I guess we’ll see. She seemed like she wasn’t her usual self a week or so ago, but she got over it. It hasn’t been that long that was seemingly fine. I mean I logically know that our pets aren’t going to live forever, but having it suddenly thrown in to stark contrast was… A bit much. Crow is senile to the point that he doesn’t really seem to know what’s going on. He just poops wherever unless you really keep an eye on him. He lays down to sleep right in the middle of the hall in the dark. He’s just very confused all the time, & now Roxy has an obvious and diagnosed condition. The clock is ticking. It’s always ticking, but it’s harder to deal with once you can start to hear it. Even though we inherited these dogs I’ve come to love them, as you do. The thought of being parted from them is… difficult to take. Solomon’s only been gone a year or so & I still get out a bowl for him out of habit sometimes. You don’t want to forget, but it hurts to remember sometimes.

They go in and the body is gone.

Only a trail of disturbed dust showing its escape through a hidden door.

The rest of the series is Buffy the Vampire Slayer with the cast of Between Failires hunting down the undead in Kansas.

The series takes a hard turn into fantasy adventure.

They find Narnia down there xD

They assume its Narnia but quickly discover that they are so very wrong.

In actuality it is the buffer park around a dome in the middle of the Arizona desert and soon realize that they are at one twelfth scale to the outside world.

That story about a dome sounds familiar. What is it from?

…the hell are all these little blue people in misshapen white berets?

…….ja, I didn’t watch any of the live-action Smurfs movies, so that went right over my head.

Twist ending to one of them?

On the comic: looking forward to Monday, no matter how gross it may be (I’m digging this storyline and everyone’s interactions and little character changes)

On IRL news: I hope the meds help out. Anything with pets & medical issues is just the worst. It doesn’t help that we live so much longer than our pets (well, save for folks who get those few animals that’ll go 100 years or more) so it always ends the same way, but you can’t help but feel everything every time (and yeah, you never want to forget, but remembering can always catch you off guard & kick your ass all over again). I mean, I’ll still remember my first cat from 30 years ago (who was 10 years my senior) and it isn’t as bad as remembering our one from 3 years ago, but it still stops me for a minute.

I’ll settle for her, or Pruneface from Dick Tracy! :D

…a boy’s best friend is his mother.

I still cry when I think about the happy times with my old dog, who passed about 3 years ago. It’s made me realize I hang on to grief and pain for very, very long periods. Same with exes, I’ve noticed my time to get over grief is almost equal to the time we spent together. So maybe in another 15 years it’ll stop hurting, but I kind of don’t want it to. I loved him and wish I could have done more. I wasn’t home at the time and it rips me apart.

Love them. It’s okay. Just show them love so you can look back and say “I did my best and they were as happy as I could make them.”

Yeah, I still catch myself looking for the mama cat out in the shop building where she lived. I don’t know how old she was but she had four kittens when we brought her home. She’s gone but the kittens have grown into strapping big boys. (All have been fixed, spay and neuter your pets, folks). She would keep me company when ever I was working on whatever project was in the shop.

Got a cat to keep me company. She had a few litters of kittens (6,1, and 6 I think..) Then I got her fixed. Disappeared a few days later (coyotes). Hate to lose a pet, but if they’re gonna disappear, why not do it BEFORE I spend $150!

I’m 73. My parents have died, my brother has died, my wife died last year. I’m living alone.
My children are still alive.
People keep asking me if I wouldn’t like a cat or dog to keep me company.
I always answer No. I can’t accept the responsibility of taking complete care of someone who is likely to outlive me.

The reason we have Crow is because a lady who was friends with my cousin couldn’t afford to stay in the hospital & went home to bleed to death in her bed. We ended up with him after he made a few stops before he got to us. I think it’s important to know where your pets will go in case of an accident. To have a plan for their care, since they can’t help themselves if you die.

I inherited my dad’s cats. It’s a worse life than they had (could come and go as they pleased, quarter-mile from the nearest paved road, then abducted to a city rowhouse), but a better life than they would have had.

They outlived my sister, mother, and father, and I suspect they think that cats live longer than the big chimps.

“Can’t Unsee” is one of those phrases that has become a meme. It’s so generalized that it can refer to something that is merely gross or disgusting all the way up to PTSD inducing experiences. One thing I’ve always found interesting is that a can’t unsee event for one person is just another day at the job for another.

Oh…I….okay
Thomas has been talking to us as well as the cast here. That’s….kinda cool. Huh.

There’s still a part of me expecting an empty room and Reggie tricked everyone.

Or maybe it’s a statue of [ Count Chocula ], sitting in the corner. :D

“Git offa my lawn you kids!”

I’m still waiting to see if it’s a prank. For some odd reason I’m getting that vibe.

Man, if this whole arc had occured a few months down the line I’d have a much harder time dismissing the idea that this isn’t just an elaborate proposal setup by Thomas. Seems like just the kind of inventive, sneaky, slightly morbid thing he’d do; if he’d had time to reeeeally trust his relationship with Carol and find some peace of mind about their economic security. I’m really curious where this is all headed.

…but then says everyone needs to be there and for Jo to have the camera going, and in the last panel it sure looks like theyre all prepared to go in.

You realize you can look into a room without entering it, right?

Why the hostility in your reply?

I didnt say it was written wrong, i said I wasnt parsing it correctly, Ie not understanding.

I’m convinced the body will be a mannequin, or other fake – I mean how much experience do they have in forensic evaluation, since no one has gotten with-in a few feet of the body? Still, good story so far regardless!

Yeah, bring it on Jackie. I can handle it.
Thomas is funny folks. But I like Thomas Jo and Carol the best for relate-ability, and Jessica, Reggie and Wes for the Tsundre they bring. Can’t wait for Monday!