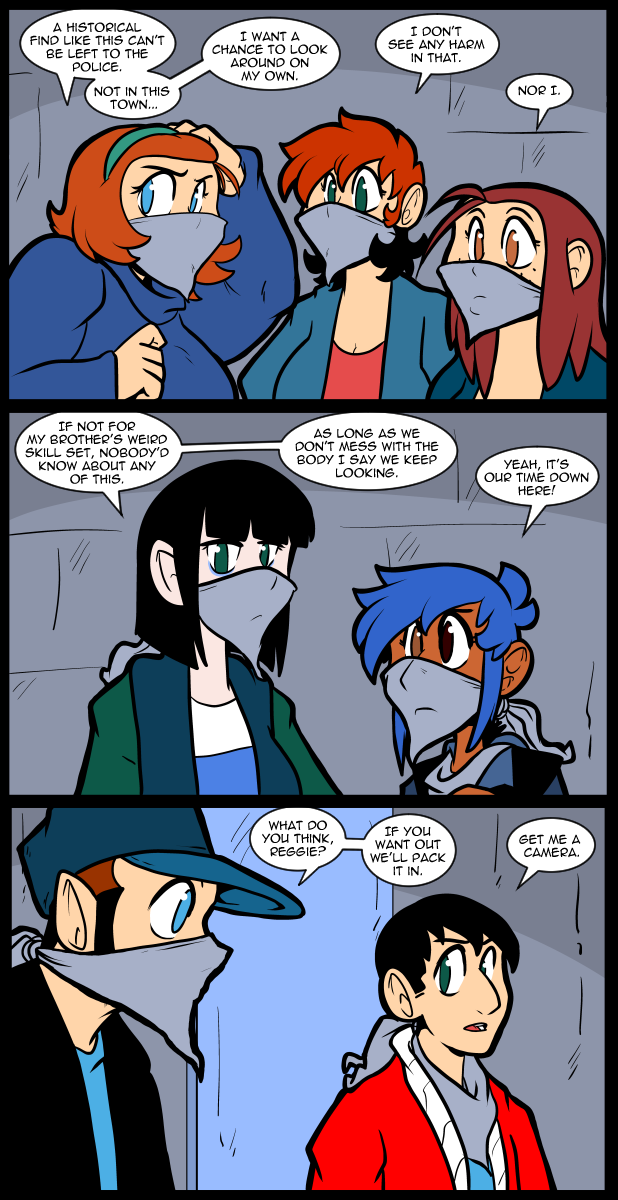 Alex gets her eyes out and gets serious.

I expect that very few of you have ever seen The Double McGuffin. I know I’ve spoken of it before, but it was a long time ago. It’s very much a product of its time, but it’s also a fun movie with a large cast of main characters. In fact, the kid you assume is going to be the main character isn’t. The character who goes through the most growth starts as an antagonist. If you watch it you’re going to see weird echoes of it in my comic. The characters are archetypal but they also break out of their zones from time to time in fun ways. Particularly Arthur Honeycut, who is probably my favorite character. The movie happens to be on youtube right now illegally uploaded to watch for free. If you have some free time I recommend looking it up. Some of the kids went on to be notable actors. One of them is on CSI something or other. The narrator is Orson Wells. The boy who plays Arthur is in one episode of Seinfeld. Apparently his only other role as an actor. Ernest Borgnine is the real antagonist & I’ve always been a big fan of his. Anyway, just something to think about.

I love how Alex has the Daphne vibe going on!

Also, Alex looks a bit like Velma with her hair up and it is just the greatest thing ever.

And thus begins another slasher movie. Now we just have to wait for the gang to split up to cover more ground.

I admire Jo for not wearing her colored contacts, around people whom she doesn’t know very well.
That’s brave. :)

[I wonder. What’s the proper grammar, here? Is it- “of whom she doesn’t know very well?]

Is it too colloquial to just leave out “whom” altogether? Sounds right to me (but doesn’t make me correct!) Just sounds unnecessary in this context.

Yeah, who knows?
I like to study songs, + I guess fiction, but something about the way I wrote my comment just seems odd to me. :)

Thomas is in a room with three, very cute redheads.
Now is the time for him to ask if they are into this “sharing” idea.
I’m only joking! :D

Everything is history. We study the ancient equivalent of fast food places with as much care as anything else. The day to day bullshit a person deals with, but never makes note of, is exactly the kind of thing historians want to know. Everything about almost every human who has ever lived passed out of memory in a couple of generations. That’s why there are blank grave markers in abandoned cemeteries. Once it can’t be easily brought to mind it’s history.

Romans brought ‘fast food joints’ – or thermopolia to the empire.

A recipe from the ancient Roman cookbook, Apicius lists a dish called ‘Isicia Omentata’ made of minced meat, pepper, wine, pine nuts and a rich fish-based sauce (Garum), formed into a patty.

So Romans ate burgers back in the day as a fast food throughout the empire.

That’s cool to know!
I wonder….did the Empire fall, because they ate too many burgers? :D

Not likely, one of the theorized causes was their use of lead pipes in the water supplies.

Darn! There goes my secret plan to topple a government, with my burgers + fries recipes. ;D

Heh, heh!
Yeah! I’ve always been suspicious of that Colonel from [fill in the blank] Fried Chicken.
:D

Worst thing to know is that Garum is; that it is most of the same ingredients as Worcestershire sauce.

Yeah, It’s hard to take seriously as history the detritus that results from current culture. However, big history, such as wars and empires is made up of the daily lives of millions of people, each one just getting through the day. I don’t say that I’m all that old but I do have memories of relatives who were born in the late 1800’s. What was day to day life for them is history to us. For better or for worse, our laptops, cell phones and Happy Meals will be historical artifacts a hundred years from now.

Two of my grandparents were born in the 1890s, and there’s a reasonable chance that I’ll live till the mid-2040s.

The last person collecting a Civil War veteran’s widow’s pension died just a few years ago. The veteran served as a teenager just at the end of the war, and in old age he made a marriage of convenience with a teenage woman–she inherited his property in exchange for nursing him in terminal illness.

History has consequences, and everything is history. Boats against the current, borne back ceaselessly into the past, and all that.

Hell, they are already drilling into garbage dumps to research history from 100 or so years ago.

I’m not sure if it’s still there, but Portland OR boasted the “24 Hour Church of Elvis.” It was an art installation in the form of a townhouse stuffed to the gills with junk culture artifacts: advertising hoardings, posters of scantily clad women with cars, Pop-Tarts, Cool Whip, Cheetos, a whole room dedicated to Charlie’s Angels (the original trio), and ALL the Elvis tatt. Velvet Elvises by the score! There was Elvis’ shrine at the very heart of the ‘church’, piled high with tins of Cheez-Wiz and Reddi-Wip. I fell on my knees at the end of the tour and Lo! Elvis himself granted me a T-shirt.

Heh, heh!
Goodness. NOW I want to SEE that exhibit. :)
I am intrigued. How fun, or not, will it be for me to [see] all the odd stuff at this salute to singing-Elvis? :D

First time ever for Alex with a headband? It suits her hair, and face, and the more of her eyes we see the better.

(I may have a wife who wears headbands and resembles Alex.)

There are several other unopened doors. They’re all worth checking.

They will find several dozen other corpses behind the rest of the doors. It will turn out that the dead guy they found first was a very prolific serial killer who also liked to collect the bodies of his victims.

Wow! What a scary thought. :D

I kinda doubt this comic will go that way, but [I’d] like to see the rest of your killer’s story written out! :)

On twitter, Jackie is talking about the 1990s, musical film: “Newsies”.

Holy crap she has eyes! Just kidding, but I like the way she shows that it is time to get serious. And I like how Reggie responds.