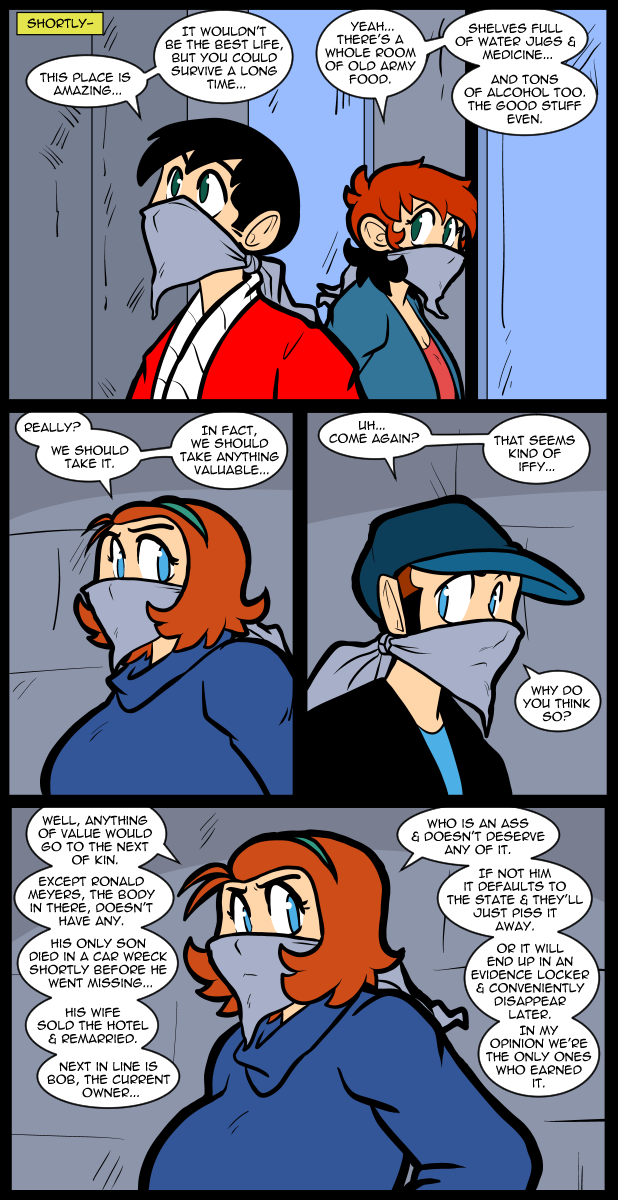 The laws about finding valuable stuff vary wildly from location to location. In some places everything in the secret area would be Reggie’s without question, in others it goes to the state instantly, or any number of other variations. It’s not a bad idea to look up what the rules are where you live in case you ever find treasure. Finding money in a book, for example, is considered treasure in some places, so you are legally obligated to try and find the rightful owner. Regardless of what you think about the rules you are going to have to make a choice. The idea that possession is 9/10ths of the law doesn’t always hold up in court. You might find the better option to be just not telling anyone. You can actually go to jail in some places if you find money on the ground & don’t try to return it. As with many things there are sometimes unseen hazards…

“You mean we weren’t the first ones to find this?” :o

If the police find out they have been documenting their expedition, the video will show them as the first in that place for a long time as well as what just got said in this comic.

If they choose to take the good stuff they must also choose to keep their find secret.

This hinges on a lot of [ifs], but- here’s one way a take-some-found-items-story could end:

1] me + my friends find a dead body, 2] the dead-body guy has a lot of valuable stuff, so we take a lot of it, 3] the cops trace the stuff we took, back to the dead guy’s place, and 4] Now the cops arrest all of us and say- “did you murder his guy, so that you could steal all of his valuable things?”………

One flaw with that logic: this guy has been dead for quite a few decades. Would the police assume that you were capable of murdering him as children, or even from within the womb?

Kids these days are heathens. Back in my day, we waited ’till we were properly old enough to hold weapons before we started killin’ people.

Does that mean your day is over? :D

Gotta watch OUT for those shiv swingin’ babies! :D

That’s possible.
But, Patricia’s Dad could’ve murdered this guy, + then told Patricia to, whenever she has a spare day, to go and clean out this guy’s place.

Consider the definition of “dessicated” and I think you’ve got your answer. :D

Hmmm, maybe he is dessicated, or maybe he’s just a guy who never learned the benefits of a good moisturizer. :D

….This is dessicated to the ONE I LOVE!

Just say, “Damnitol,” your druggist will know what you want.

Thanks. :)
Heh, heh, heh! I like “Damnitol”.
It reminds me of the birthday card that says: All smart babysitters make a quiet, nap time , with “Valium-flavored punch”! ;D

Well what I would say is that objects of value are likely not plentiful here so a couple things taken here or there shouldn’t be missed and it’s not like the state will miss them regardless. You can also say any dust disrobed was during the initial investigation and they’d have nothing against you xD

Maybe like- an exotic dancer, who has her “important areas” covered in dust, and then makes her dance more fun, by pouring water over those dusty areas?

Hee hee hee!
I wonder, should I stop talking about [dirty] people?

Eh, I’m not one to judge. Its your mind — if you want to keep it … ¿under the couch? … well its probably cleaner than a gutter anyway …

I think Alex might be getting a little too big for her britches here. Even if they were to smuggle all those goods out, they should hope that Bob doesn’t find out about it. Otherwise, it could be lawsuit city for all of them.

There is another factor to think about, the number of people involved.
For the plan of taking anything of value to work EVERYBODY there would have to keep quiet about it. With that many people there (and a pair of siblings no less) it would be hard to believe that one of them would not be able to keep quiet. There is bound to be at least one that does not know how to keep a secret, and then there would be the chance of one of the group getting mad at someone else and telling the authorities.

I STILL know what you did last summer!

JRPG rules: You found it, it is your’s.

Given a situation like that, I’d say this stops being looting and starts being salvage.

Can’t fault her logic, given the facts in evidence. Particularly in regards to the nice booze. Even if none of them want to drink it, you can resell it to raise money for Jo’s movie or whatever. If it’s whiskey or similar, it might be old enough to be worth a pretty penny on eBay. Or even at auction.

Now this is how the Goonies should have ended… raiding the leftover rumstock that the dead pirates left behind.

Then the Goonies say: Yay! we saved our home!
Now let’s get BLASTED on our leftover cases of rum! :D

in the stated case above, with no kin and the options being shit, i’d say take the valuables.

as for traceablility, i’d also probably not report my finding of the body and leave it in there as a tomb. someday when the building is torn down they’d find him. let this place be his mausoleum until then

Grave robbing 101. Who ever owns the site owns the goods. Yeah owners and rightful owners can be a matter of legal and moral semantics but usually it falls on who ever has legal possession gets to decide what happens. So that having been said if they want to rob the place then take what you can get, leave the rest and don’t tell a soul you were there. Of course ideally don’t leave any evidence behind either.

Ask any archeologist on this one…. ( Indiana Jones not withstanding lol )

suicide or accidental death.
The guy went down to sit in his fallout/bomb shelter,
Turned on the radio when he sat down.
And then died.

A violent death would probably be visible (hole in dried skin/skull/chest) with dried blood accents.
Poison or asphyxiation would leave results similar to death by heart attack or stroke, though there is more liklihood of convulsions which would have knocked him out of the chair.

I mention asphyxiation because the shelter had to have had some sort of air supply (probably filtered) and if he did not turn it on when he went down there, and then was unable to get back up (stroke/attack)

Remember that they remarked on how dust free the basement was?

The money going missing could be rumor after the fact, or it could have been the wife leaving after he disappeared. Or perhaps she found him dead and grabbed what she could and left.

The wife might have never known about the shelter – especially if they did not live at the hotel.. The husband might have gotten it commissioned, and had not told her. (remember the time period, the culture was different) either he intended to tell her, or there might have been tension then.

The missing funds could also have been the cost of the construction. He would have kept it off the books, because you didn’t tell people that you had a bomb shelter (paranoia then and now-look up survivalists information) And if it was long enough after the construction (assuming it wasn’t all his handwork) the craftsmen who did the work would not think to mention it – their silence would have been bought and they probably built a LOT of those shelters in a LOT of places for people. (all kept very quiet)

I just picked this comic up again after giving up my webcomic habit for a while.
I love the mystery!! and after realizing as I was reading forward that I was getting close to the latest comic, I was so worried that I would be left in suspense!!
( I still kinda am-What will they decide?)