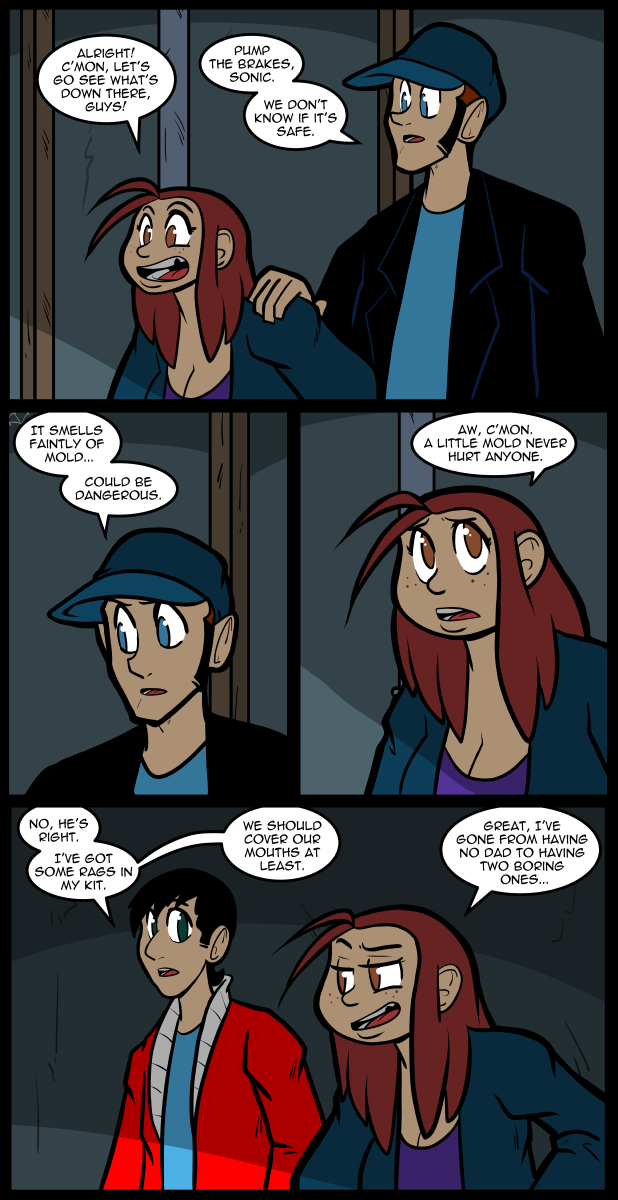 I used to watch urban exploration videos a while back. Probably 3 years ago now that I think about it… Anyway, I kind of got out of it because things get very samey. Secret things and actual interesting things are rare, strangely enough. So I moved on to other stuff. Of course there’s always time between what inspires stories and when I can actually make them, so this is no different. Although this isn’t urban exploring technically, ghost hunting functions more or less the same way. In fact a lot of urban explores fram their content the same way as a ghost show, except for the supernatural aspect. Of course finding a body isn’t the view draw it once was now that people are hyper moral about human dignity or whatever you want to call it. It’s strange that looking at a corpse is context sensitive. If it’s really old, like a mummy, it’s cool. You can show it on tv. If it’s a guy who just landed on the pavement you can’t, unless it’s a crime drama. Basically it’s bullshit. You can exploit death for views if you have the proper narrative structure. You know, whatever, right? Consistency isn’t the hallmark of humanity.
In any case right now it’s considered naughty to show a corpse you find on video. Will that change? Probably. The rules for things are so fluid at this point you just kind of have to take your chances & hope a mob doesn’t come to get you fired.

My cpap is being less effective than normal right now, and I kicked up a lot of dust in my efforts to make space to dismantle my bed, so I’ve been dealing with really bad confusion all day today. It’s very worrying that my mental acuity is so dependent on that machine. It’s literally crippling if my apnea isn’t well controlled. I get crazy in a very real and dangerous sense. I’m aware of it now so I can mitigate it to a degree, but it still makes me a potential threat to myself and my family. The signs are very familiar to me now. Confusion, blurry vision, headache, and having songs stuck in my head. It’s really weird, but when I don’t get enough oxygen as I sleep it triggers the music part of my brain to kick on. It’s not quite the same as an earworm, but it is similar. Usually a song I’ve heard in the 24 hours before the incident will just play in a loop in the background noise of my thought. This time it happens to be one of the incidental tunes from Fire Emblem. Which is better than a song with words by a lot. Incidental music is actually the best possible scenario in this case. It fades into the background and is less disruptive than say Push It by Salt & Peppa.
At least some portion of the mental problems I’ve had over the last ten years have been clearly caused by sleep apnea. They fade away to just the regular mental fuckery when it’s well controlled. When it isn’t I turn into a lunatic. A barely functional mess of a human that is exasperating to be around, and I’m not exactly a joy on my best days. Seeing the deterioration of my grandfather really gets me to thinking about the future, because I’m mentally much worse than he was at my age. Chances are I will have terrible dementia at a much younger age & frankly you aren’t even yourself anymore at that point. For someone who values control the prospect is hellish. Being me is basically all I do. If I’m not me then what’s the point even?

So … she’s complaining because they aren’t fun guys?

Well, it sounds like there’s some fungi down the stairs.

Yeah, but I doubt there’s much room.

I dont know what she’s complaining about.
These green guys really grow on you.

They also belong to a motorcycle club, named “The Gang Green”.

What, does he think that a sub-basement room that’s been sealed for who knows how long would smell springtime-fresh?

Mold can be very dangerous to inhale. Whenever there’s a potential mold issue, contractors typically are obligated to use breathing masks to avoid potential health risks.

For a single run down? It’s probably a tiny bit overkill, but he’s reacting according to his contractor training, and realizing that it’s probably better to be safer than sorry.

There’s a lot of ways a disused area can smell. If it smells like soil it’s a lot better than if you can actually detect mold.

I feel you, Jackie. I had to do another sleep study last week for my medical insurance. They started me half the night with no CPAP just to see where my baseline is now. When they finally gave me the mask, they started low, then slowly ramped up the pressure over the night. Didn’t help that the mattress they had me use gave me severe lower back pain all night long in addition to my regular apnea. I was a wreck the entire day after.

I feel it as well.

Just over the summer I had a full sleep test, and they increased my machine’s operating pressure… I hadn’t even noticed that The morning headaches and increasing grogginess in the morning had started to pop up again.

Depending on your machine, you may be able to make an adjustment yourself… increased air pressure (They only increased mine by 1, from 14 to 15) may make all the difference.

Mental plasticity can be boosted a bit by exercise. The interesting thing is it has to be *deliberate* exercise. So maybe just thinking of an activity as exercise can help.

Yeah, agreed. My dad’s taken up Sudoku. He’s a crazy whiz at it; I tried some once and I can barely get past the easy puzzles.

None of us wants to end up like Grandma, who occasionally isn’t a hundred percent sure who her children are.

Mental processing is improved some by exercise, but more by cognitive exercise. For example, going for a walk is better than a treadmill because your brain is engaged with observing the surroundings and route planning.
My guess is an exercise bicycle with steering to navigate a (cycling?) video game would also work.

Jackie, have you thought about getting a pulse oximeter to track how much oxygen you are actually getting. The medical grade equipment costs a couple hundred bucks but the athletic grade oximeters can be had on amazon for under twenty bucks. It will let you keep track of how effectively you are breathing in a measurable way.

There’s a part of the brain that inhibits creativity. You need that for when you need to get real.
In Parkinson’s disease, when that part of the brain has reduced function, you suddenly find patients getting involved in painting, drawing, etc.
Could you be starving specific parts of your brain from oxygen?
I had sleep apnea years ago; not as much now that I’ve lost 20 kilos of weight. But when I did I found it helped some to sleep sitting up or lying on my side. Don’t know how compatible that is with a CPAP machine, though.

(Only an undergrad, take appropriate salt)
Your brains surface is basically completely covered in blood vessels, so while oxygen starvation should definitely affect some parts of your brain before others, it won’t be anywhere as specific as your Parkinson’s example (and I’m not sure enough of the speed of oxygen diffusion in the brain to say if it practically matters. If it does then) It’s less like starving certain regions of cortex, and more like starving all the connections between the cortex (hense the confusion) The only way I know of for oxygen starvation to affect one (or a few) brain regions like that is for there to be a blockage in just one of those blood vessels, which is a stroke.
I got nothin for the music thing though. Individual brains can be weird like that.

If you see an increase in creativity with Parkinson’s it stems from disinhibition. Parkinson’s is primarily a movement disorder but it is often accompanied by dementia. The initial impairment from the dementia is often subtle and a mildly disinhibited person may be more creative for a while.

My earworm killer is “Spirit in the Sky”.

” Being me is basically all I do. If I’m not me then what’s the point even? ”
But, Jackie, you can’t be me. I’m me. And there’s really nothing to recommend it-consider yourself lucky. We should probably be glad you’re not hearing Ronnie by Metallica. Ooh, try this, hum a few bars of “Tie me kangaroo down”. Sorry.

Ahhhh! Crap crap crap! I had JUST gotten that out of my head!