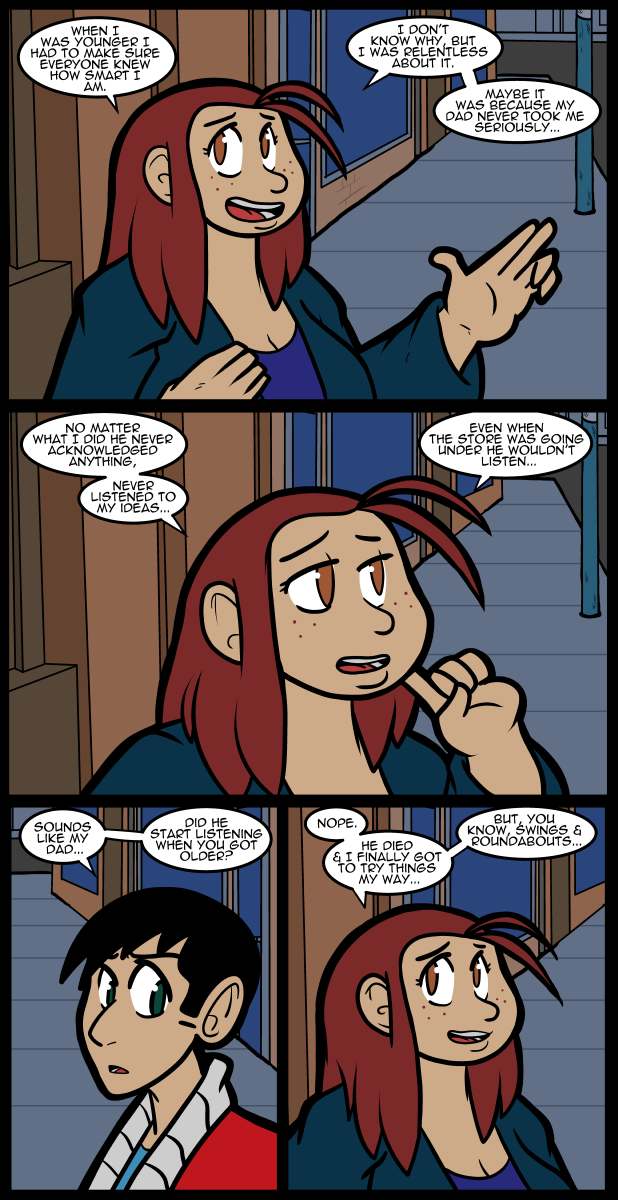 The children of strong men often end up a little broken. Although everyone ends up broken somehow. If they have a father around or not.

Who else had to look up Rulette’s idiom in the last panel?

I expanded your world. Please hold your applause.

I found that it didn’t matter to Dad how good an Idea was, he wasn’t gonna listen to me, and even if he heard me, wasn’t gonna use my suggestion. It was a great way to learn to be passive and feel powerless. I found out from my uncles that this was a response to the alcoholism in the family– and his growing up powerless to defend himself against the beatings. Gotta say; he never hit anyone in our family, not once, never came home drunk, not once. Never flew into a rage, never threw things, never punched walls, not once.
So much I didnt know about him, and still don’t.

Wow. I realize I’m just some random guy from the internet, but- I’m sorry to hear that you went through a situation like that.

Lot of possibilities with that.

I know for some smart kids it’s more a defense mechanism than anything. I confess that, growing up, I didn’t exactly do anything to squelch the idea that, if I concentrated hard enough on your spinal column, I could kill you.

It buys you peace and quiet, and that’s a welcome thing, especially as compared to the alternatives. But it doesn’t exactly do a lot for your social life when you spent your late elementary and most of middle school years playing Oz the Great and Terrible. No one’s particularly interested in looking behind that curtain because the giant head floating above it has made it abundantly clear over a period of several years that anyone who does is going to immediately burst into flame.

That’s all metaphor, of course, but it turned out to be more true than I ever thought possible. Especially after I found out–about two years after graduating high school–that half the girls I’d been interested in were likewise interested, but always stopped themselves with one simple question: “What would we talk about?”.

There was a science test where everyone did poorly-except me. Which the teacher announced by saying” Everyone did so poorly on this test, I was going to round all the grades up 10 points, but (me) made a 95, so I’m only rounding them 5 points.” The looks I got could’ve melted steel.