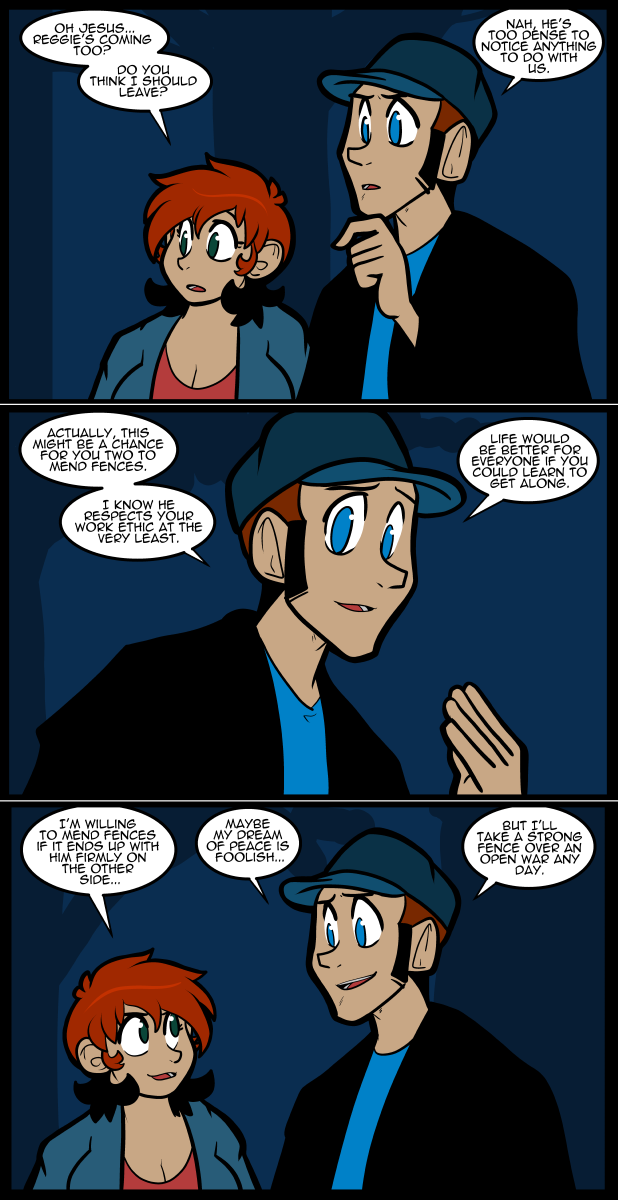 I read somewhere that depression can cause memory loss, which I had never heard before, but had kind of noticed. I’ve mentioned going through a year long super depressive episode many times. During that year I played several games, watched many movies and shows, but have very little memory of any of them. When I try to think back on them I have a sort of vague feeling like I played, or watched them, but struggle to remember specific details. Before and after that time I can recall things with relative ease and clarity. The stuff I wrote in that year is also stuff I have to go back to when I need to reference it because it’s not just in my head the way other stuff is. I’ve always had a pretty good memory, but it’s not as good now as in my youth. Even so that roughly 365 day span is a weird gray spot.

Your subtle foreshadowing is good. There is an undercurrent of tension. I feel like something big is coming.

I don’t have Twitter so you get my reply here.

The best way to read DC and especially Marvel is when you here something that makes you want to read a run for whatever reason (writer you like, interesting premise, whatever). Don’t fucking start reading it, wait and vaguely pay attention to if they change writers, run it into a crossover event, change artists, reboot continuity or some other horrible thing that you don’t want to deal with. If the writer finishes their arc and moves onto doing something else without anything fucking up the series, buy the trades (or the digital equivalent if you’re into that sort of thing). But reading a Marvel (or to a less degree a DC title) before it’s finished is just asking to get betrayed.

peace was never an option

Makes sense. I bet it’s not so much memory loss as that long-term memory formation is impeded by the severe depression.

Yep, a person with depression may be doing the things but it takes a certain level of arousal and energy for things to move into long term memory. It’s an analogy but think of depression as an energy sinkhole that siphons off the mental energy that one uses for day to day functioning. With that energy loss, a lot of things just don’t reach the threshold need to move into long term memory. You can also get this with physical illness or episodes of severe stress. It has long interested me that some stimuli, smell for instance, can provoke recall that you couldn’t or otherwise wouldn’t have recalled.

DOA was just referencing this. I think it’s definitely possible. I’ve had some medical issues the last few years, and my memory is really unreliable. Call it chemobrain, but I don’t know if that really explains it. “It was just the other day…” has become my operative phrase.I don’t know what to recommend -actually if you find something that helps, I’d like to know. As always, love the comic-you’ve been part of my coping mechanism-guess that doesn’t help-you’re the only person in the world who can’t just come here and live a little vicariously through your characters-at least not without writing them first.

Indeed, as Robert Frost once enlightened us.

waiting for the day when Carol finally slap Reggie! Off the clock of course.

Possibly not being American, I’m missing something, but what is this problem about Thomas and Carol?

This is just my memories of the BF, past comics, but- I think there is a policy at Thomas’ + Carol’s store, that says that workers at the store can’t date each other.

I don’t know if Thomas + Carol can get fired for that.

Actually, I’d believe that. I know some aspects of the US quite well, I’m not a stranger to the place and it for a country that constantly cries up its foundation of individual liberties, it has a tremendous range of intrusive petty bureaucracy of that sort.

Americans talk a good game when it comes to personal liberty, but regularly fail to walk the walk.

Working at a large state run psychiatric hospital, I’ve been on both sides of that coin. The hospital is the largest employer in a small town so there is not much way to avoid having multiple family members working in the same facility. The official rule is that you can’t be in the supervisory line of a second degree or closer relative. the usual practice is to separate relatives and spouses out to different buildings or programs and for the most part that works well. When you start getting close to the top of the pyramid then the pool of available people starts getting smaller. When I was working there half of the clinical management team was made up of “power couples” including my wife and I. 99% of the time people were able to be professional and keep work life and home life separate and the existing policy worked well. The other 1% on the other hand… I had a psychiatrist who functioned in a pretty personality disordered manner and who got into a romance with one of supervisors on my team. The state considers psychiatrists a rare and valuable commodity so the unspoken rule is keep the psychiatrist happy. Trying to walk the line of keeping a psychiatrist on staff and minimizing their disruptions just about broke me. When you are looking at a private business I can see where one of those 1% relationships could sink an entire store. If you have a chain of stores, statistically it is bound to happen that a couple of your employees will have a toxic relationship. It’s just easier to send a couple of people on their way than to try to reboot an entire store.