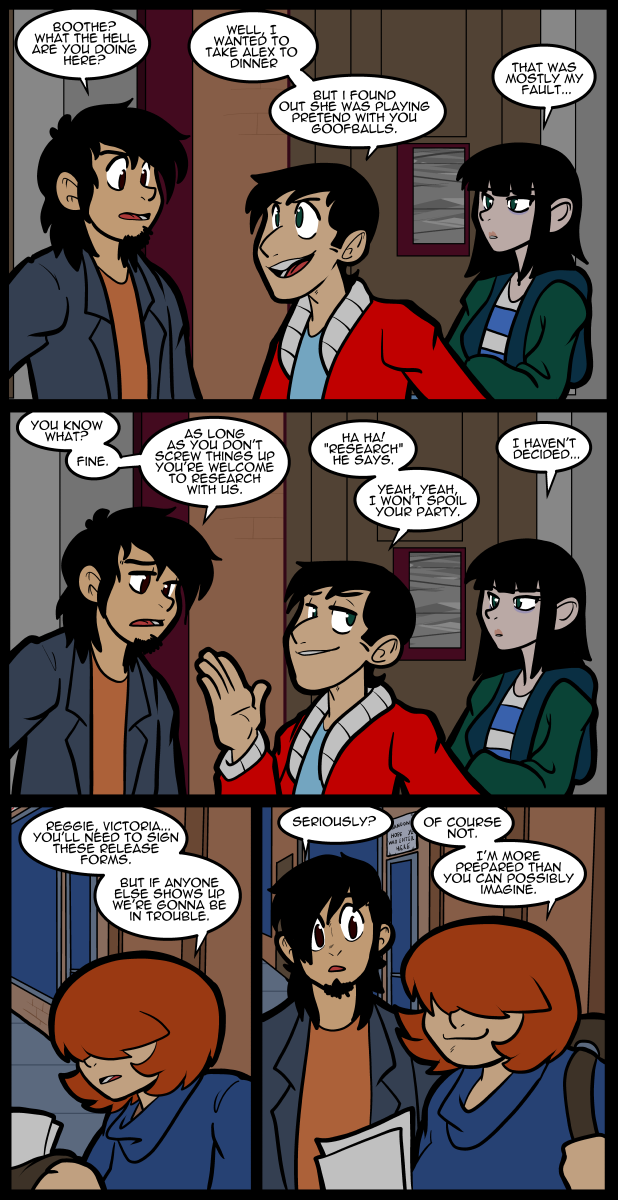 Alex on top of the situation.

Alex: I’m more prepared than you can possibly imagine.

That *is* legitimately hot.

Oh, I’m pretty sure she’s the Top in most situations, I’ve no doubt in my mind about that.

Pretty sure she’s on top even when she’s on the bottom.

[TehWanderer]:
Alex might still dispute that, but only to be ‘clever’.
Even if she’s below the “Top”, that doesn’t make her the “Bottom”…
…rather, she’s the “FOUNDATION”!
( … with a ‘nod’ to “Psychohistorian Hari Seldon”, & the late, great Dr. Isaac Asimov … )

Victoria is honest enough to admit when she screwed up. I respect that.

Reggie is driving me crazy. There are times when I think he might not be that bad, but then there’s times like this that I just wanna bop him in his big dumb nose.

I’m just hoping he is the reggie the author has been portraying him to be where he is the guy who is utterly infatuated with Alex, cuz that Reggie has in my opinion had changed a bit for the better.

He is not a one-note guy. I really enjoy the futher characterization we’re getting, especially where his own sister got something wrong about him (“You hate fat people!” “No, I hate stupid people and if they’re fat that’s usually a weak point I can leverage.”) despite them living together for years.

That’s very true, and I didn’t really mean it in a bad way either. I kinda like it when characters drive me up the walls a little, it just means the writings good and the character isn’t predictable.

with a bit of luck, Reggie will fall through a rotten floor plank ^^

Towel – never EVER forget your towel.

Let that be a lesson to you, Patrick. Always carry a flare.

“There are few problems that can’t be solved by high explosives”.

– a slogan that is sold on decorative plaques, at some military relics auctions.

“As my uncle Braceforth used to say, ‘There are very few problems that can’t be made better with a night’s sleep, breakfast, and a pickaxe.’ He never went more than two miles from the warren in his life, but the principle still holds.”

That’s a great quote! I’ll write it down.
Is it from the webcomic- Digger by Ursula Vernon?

It kind of sounds like a quote from The Hobbit. :D

So how much longer until pretty much everyone is in this storyline?

How about Monday? How’s that grab you?

Not gonna lie, those huge eyes in the last panel kind of freaked me out.

Here is some trivia, that was asked for by no one:
on twitter, to describe this page, Jackie said, “Be sure to bring your death certificate”.

Along those lines, here is a possible-1980s rumor:

In the 1980s, there was a line of big, squishy dolls, called The Cabbage Patch Kids.
Some people were really, really into them. the CPK company even gave you a fake birth certificate, for each of the dolls.

The rock band, Motley Crue, [legend says],…maybe because they were annoyed by the CBK dolls, took a helicopter over a live volcano, and dropped a CBK doll INTO IT!
Eep.

[Legend says],…in response to the untimely demise of this cbk doll, the Cabbage Patch Kids company sent Motley Crue a toy death certificate, for this doll.

Alex has prepared for multiple possibilities on multiple levels. Are they even gonna look for ghosts? Maybe they’ll happen on some sensation craving apparitions eager to plant ideas in unsuspecting ghost hunters. Alex, of course, has planned for this.

Lol, Reggie in panel 2 is a new look. Or rather an old new look, at his most annoying.

Hey Jackie, if you were given an opportunity to play video games with a bunch of guys controlling a bunch of robot puppets in exchange for promotion and possible sponsorship, would you be interested?

Maybe. I don’t really understand what you’re explaining though.

The channel is called Robot Co-op and it features its host, Commander Rikk Wolf, and his robot pals, Topsy Bot 5000, Johnny Cylon, and Flux Namtari playing various games while hiding out in a defunct movie theatre during a zombie apocalypse.

It was originally meant to be a successor to MST3K a few years back until the MST3K reboot happened so they had to change gears from movies to video games, which appears to be more to their fanbase’s liking than anything.

Here’s a link to their website and their YouTube channel. Rikk and the guys could use some more recognition but they’re also very down-to-earth and very very funny with their material. Their fanbase are known as the Agonywolf Media coggers.

You really need to mail me this because I’ll forget why I looked in the first place the second I get busy for a few days.

Sure thing! I’ll send you a few more details and links. :)