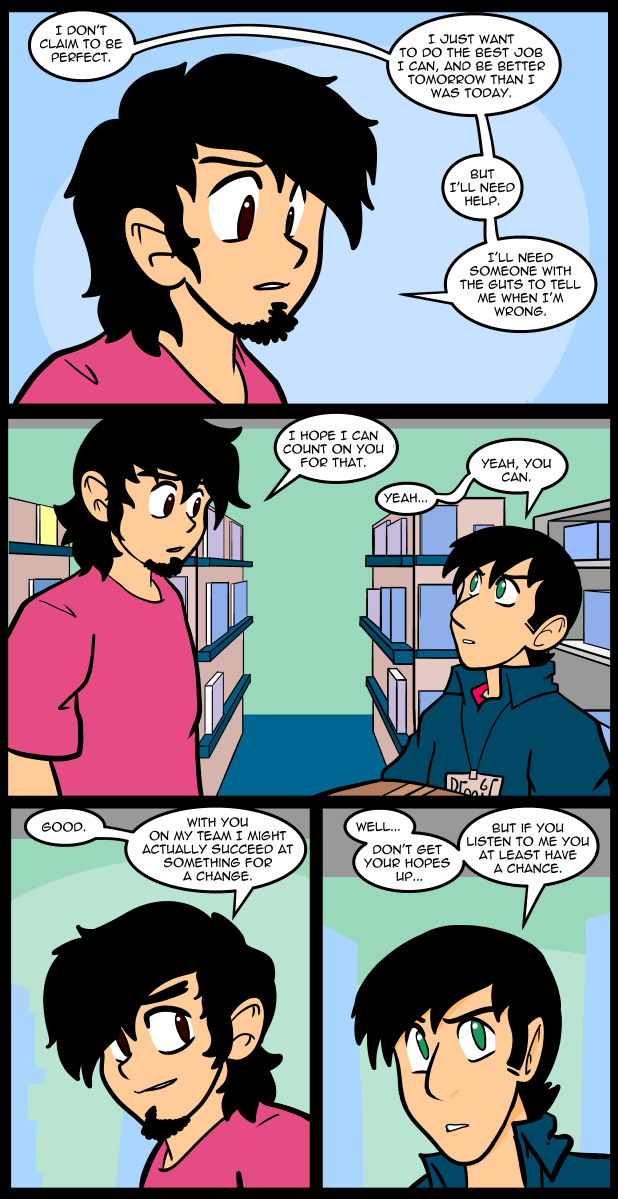 I doubt that Reggie wanted a fist fight, but I suspect he wanted to get under John’s skin rather than get passively invited to be work friends, or whatever you call this. After the night of the furries John understands more about Reggie, and he finally put it all together. He bent like the reed and avoided disaster. this may not be a victory as such, but it’s something good. John has accepted that he is flawed and that’s important too.

The teen wants to go to the store again. I’m starting to think I should have kept my level of wellness a secret. We’re going to end up back where we started at this rate. Still, I need to focus my eyes on something other than this screen all the time. Walking around doesn’t do me any harm either. As long as we eat before we go out it keeps her from trying to get me to feed her… well, at least a little bit. I think sometimes that she is some sort of agent meant to teach me something ironic, but I can’t see the point of it were that true.

She wants to get a mother’s day gift for her mom. A mom who doesn’t remember who she is until someone tells her. The teen is supposed to be, like 5 or so in her mother’s mind. Can you imagine what that’s like for her? Her mom was never a very nurturing person, but she was still her mom and I know that hurts her very deeply. She talks about it a little now because she’s gotten better as time has gone by. We’ve had a positive impact on her life, but there are some hurts that you just take with you forever. Part of me thinks it’s pointless because as soon as she leaves her mom won’t know where she got the present, or it will reset after a few days and she’ll trade it to someone for pudding, or whatever. I don’t know if she’s buying the present for her mom, the memory of her mom, or her. Maybe it’s all three at once.

And my love of these two increases

“And, She’ll Just trade it for pudding” Ouch, That hit me a bit.

I’m going to count it as a mutual semi-victory.

Agreed. John dodged Reggie’s dickishness and managed to bring him down to reality for a moment, potentially gaining a new ally. Reggie got to be a dick without provocation, get away with it, and still manage to learn something.

That last panel with Reggie and that subtle indication of a nostril–nice! :)

If I may venture, I take it that her mother has dementia, or a similar disorder, from context? Poor kid… there is not much you can do except be there, regardless of how much it hurts. Please correct me if I am wrong.

Her mother has memory loss after a certain point in her life and can no longer make permanent memories. Every so many days she resets. Sometimes it goes for longer but it always resets back to about 10 years ago.

Well, there is not much I can say, but I will say this. It might hurt for the Teen to see her in this state, but the hurt will pass quickly. To see her mother, being happy, even if you do have to do a recap of events to lead up to that point, will stay with her for much longer, and will make the pain bearable.

I wish you both all the best… I really do :(

I’m so sorry to hear it. My mother passed away last August at the age of 81, and she had Alzheimer’s or some similar form of dementia. The part that hurt the most, for me at least, was remembering what she used to be like before the demential — it was like it turned her into a completely different person.

My sympathy goes out to you and the Teen. Best wishes to both of you in dealing with her mom.

John and Reggie both need a little maturity. Perhaps this will be a growth opportunity for them.

Sorry about your Aunt. Years ago, a friend’s wife had a stroke in her late 50s and it reset her brain. They had two sons in their 20s, one of whom worked for me a few years later. She thought she was 15 or so, about the time she met my friend. She recognized him, but the boys were a zero. She refused to believe she had two grown sons who were, to her mind, older than she was.

My Mom struggled with demenia the last few years of her life. She thought Iwas still working at the nuke plant (not for 20 years) and sometimes thought my niece was my sister. Eventually she started sleeping 20 hours a day, and the confusing world just went away.

I have to say, I *love* the pun in the strip title.

(Also, I’m very sorry to hear about your aunt)

The only thing I expect to take with me from this world is my relationships with others – and how I treated them (yeah – I’m religious). It is beneficial for the teen to give gifts to her mom because it’s part of her relationship. Even if her mom forgets the gift, the teen will remember how she treated her mom and valued her. That part of their relationship will become part of the fabric of the teen’s personality. Kindness to others without expectation of getting anything in return (except for the satisfaction of knowing we did what we felt was right) is part of a strong character.
One of the ways that J. K. Rowling demonstrated the strength of Neville Longbottom’s character is his visits to his parents who were mentally destroyed and didn’t really recognize him.

I can’t begin to understand having a family relationship that deals with such a drastic memory loss, but I can understand wanting to do something nice for someone else. I think it is great that she wants to give her a gift. If for no reason than making herself feel right, it will seemingly help add some normalcy to their relationship.
Additionally, I have learned in life that you can not do nice things with the intent that you are going to get out of it what you put in. People will rarely repay you (even with kindness) what you feel you have given them. Instead you do things for others simply because it is what you want to do.
To put it simply treat others well because it is how you want to be treated. However don’t expect it from them just because you have done it.

My late grandmother lost it a bit towards the end. She’d tell us the same story about stuff 30 years ago 5 times in an evening. At first it was a bit frustrating, and made her sad if we nicely pointed out we had heard it already.

Then we realized she was happy and having a good time sharing with us, so who cared if she got to enjoy it 5 times an evening? At that point we got to enjoy her happiness 5 times too.

My point is, as long as there is happiness about a present, by Teen and/or Mom, even if later forgotten, there _was_ happiness, and that is good.

That is great wisdom gained from true lifetime experience.

And John shows the sort of exemplary attitude every manager should have.