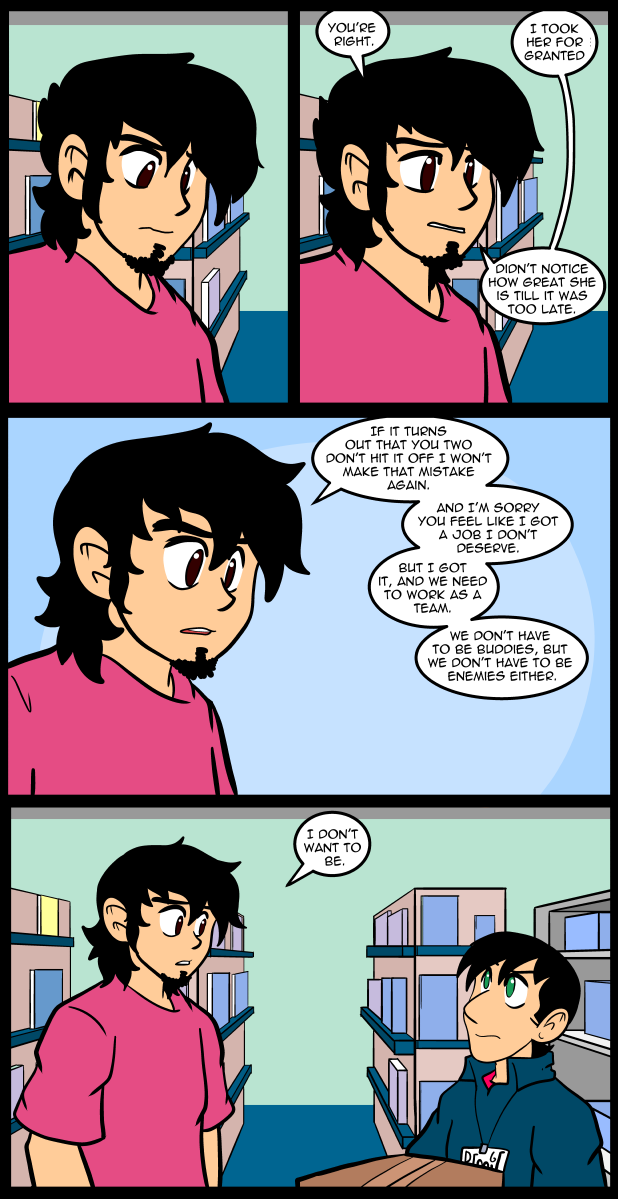 John has chosen the path of peace. If Reggie knows him I think it’s fair to say that John knows him now too. Maybe things don’t have to be terrible all the time.

My allergies have just been unbearable the last couple of days. It really aggravates me because it makes me slower at everything. We even got a little rain but it didn’t help. It also looks like tomorrow may be stormy to the point it could get bad. I really hate that because I can’t settle in and work the way I like. Houses really should be made to withstand the worst conditions possible in a given area. Earthquakes in California, for example, and tornados in the Midwest. If we’d just make out houses into Hobbit holes we’d save ourselves so much trouble. That’s how wealthy I want to be. Enough so I can live in a house without ever having to worry about the fucking weather.
When I was a kid we lived in a house with a partially finished basement and I lived in it. It was great because no matter how bad the weather got all my stuff was relatively safe underground with me. In our house now there’s radom in the basement and it’s not finished. Also it’s got some kind of dust or mold, or something, that makes me have breathing issues. Sometimes I can go down there and be fine and other times I spend an hour after trying to breath properly. There is a fan that sucks out the radon, supposedly, but I honestly don’t trust the people who put it in. Workmanship out here is terrible. Although I’m not sure I’ve ever lived someplace where builders took their jobs seriously. The wiring in the house is clearly wrong. You can’t turn certain lights on in conjunction. I can smell ozone when some are turned on. If tornados doesn’t get me an electrical fire will eventually. I wonder if I finished the basement if the dust/mold thing would be fixed. I know it sounds shallow, but I put a lot of effort into gathering my stuff. It would be bullshit if it got scattered to the literal winds. I couls replace some of it, but the out of print book would be a terrible loss.

Man, I have so much stuff I need to fix. Just my truck has got to be around 2k… It’s gonna take so long to save up that much money. One of the headlights got smashed, the windshield is cracked, I’m pretty sure there’s a hole in the gas tank. The wipers don’t work right. I’m lucky that the engine still engines, really. I bet I could buy another truck for what it would cost to fix mine. GUUUUUUUUUUH. I bought two repair manuals so I can do the easy stuff myself when I’m feeling better, but man. Ford needs to make a car everyone can afford to drive and repair again.

I think I’m almost well enough to start selling stuff on ebay again. I can go on short outings on my own without needing someone to drive me. As long as I pay attention to the temperature I can get there and back well enough to resume the purging of superfluous things. I wonder what I should do about my old comics. They can’t possibly be worth anything much. Shipping them would be expensive too. what do people do with old comics these days? Do you guys know? Are comics shops even a thing anymore? I haven’t seen one in a decade at least.

Well, now the ball is in Reggie’s court. Let us hope he isn’t as bad as we hope he isn’t, but worry he may be.

I’ll give it 50/50 odds. Reggie tends to say things in the worst way possible without actually intending to be offensive, so even if he isn’t as big of a jerk as he appears, he’ll still probably manage to come across as one.

I love my Ford. 320k on the odometer (which was broken for 4 years, so it’s probably closer to 400K+). It’s pretty easy to work on, especially if you have a service manual. If the transmission is manual it’s pretty easy to rebuild, but if it’s an automatic then good luck. Going on 18 years and still original engine and transmission. The trick is to not be afraid of it. Not much in there you can hurt, but be ready to get greasy. It’s actually kinda fun getting in there and seeing how everything works.

Yeah…except the hydraulic concentric slave cylinder which will be the reason I get rid of the truck if I do. I flat out don’t trust it. It’s been hell.Replaced clutch master cylinder twice, entire clutch and slave cylinder once, and still hell. But I have gotten 18mpg with it before. Not bad for a 20 year old 1/2 ton 4×4.

Let me get this straight: you want to live in a hobbit-hole, and go there and back again?

So long as an elf-dwarf romance subplot (my one and only complaint about those movies, the Hobbit in book form is much more comedic and lighthearted than the Lord of the Rings and I think the movies got the tone right) isn’t shoehorned in, who wouldn’t?

They’ve got to start somewhere.

John, it’s not too late! You can still ask her out. It’s not like she’s engaged or even going steady with Reggie. She can date two people at once, nothing wrong with that.

Well, knowing what type of guy Reggie is… that would be a contrary action to what John just said. I suppose that would make them enemies in Reggie’s eyes.

It would also put her in an awkward position. My gentleman-fu says “bad idea.” :P

If all three parties are fine with that, there’s nothing wrong with it, but I doubt that both John and Reggie would be ok with that.

I doubt either John Or Reggie would be o.k. with it. Probably a Declaration of (flat-out) War would be more welcomed.

Reggie, don’t mess this up!

Hmm.
Just thinking at random-
There are comic book shops, that buy + sell [vintage, + new,] comics, in places like Ohio, Illinois, other Midwest states, or California, etc..
I don’t know if this store is good or bad, but there is a comic book store in New York City that buys c. books. The store is named: Metropolis Collectibles. MC can be reached at: www [dot] metropoliscomics [dot] com.

My only other idea, is to call a library that you trust/ that is very professional, + ask a [reference librarian] to search for [comic book shops, and bookstores that buy comics + old books].
Just one warning I’d like to give, however, is that a LOT of collectors of comic books, or collectibles, want c. books that are in excellent condition, or in mint or near mint condition, so I don’t know how well [comic books in good/regular condition] will sell in the current comic books market.

Some other comic book ideas:
1) I know nothing about how good this store is, to people who sell them c. books, but they sound very good: www [dot] excaliburcomics [dot] net. Excalibur Comics is in Portland, Oregon.,

and
2) [ I don’t know how good this store is, either, but there is this store]:
searchlightcomics [dot] com.
Or, my VERY BEST idea for selling comic books, is to- call a instate library and/or your local library, that you think is the best/is the most professional, and ask their reference librarian: I have a group of comic books from such-and-such decades, who do YOU think is the best [person or store] for me to sell them to?
Those are my best ideas, for selling a comic book collection. Best of luck.

Rule of acquisition 76 every once in a while declare peace it confuses the hell out of your enemines. It certainly made Reggie stop in his tracks

Have you considered a mask of some sort for going into your basement, to combat the radon/mold/whatever? A simple painting mask would probably suffice, but even a full-on military grade gas mask is not terribly expensive. (If you’re having trouble finding a good one, email me and I’ll point you in the right direction.) Ask your doctor what grade you’d need.

So @Jackie, what you’re looking for is a suck-proof house. I think it would be expensive. And it would be below grade, so you’ve got the mold/mildew/dust/residual pollen issue all over again.

You drive an older Ford Ranger, yah? My brother has a 1997, and it has recurring problems with gas leaks. It’s not the tank. We’ve got a family of white-footed mice who like to get up underneath the truck and gnaw on the fuel line. Why they want to chew on a copper tube full of the most hurtful thing in the area I’ll never know, but my brother has patched and/or replaced the line three or four times.

We have Virginia Ground Squirrels and chipmunks, rather than fuel lines, they seem to like gnawing the rubber joiners that connect those metal lines. Makes me crazy paranoid to come out to start the car/truck, and smell gasoline before you even get the key in the ignition.

Better before than after.

I know it’s probably not much help, but I know of 3 comic book shops close by to where I am (though that’s Northern California, so not terribly useful for your task). Wait…4, but I haven’t gone to the 4th one.

Anyway, comic shops are still around, they just take a bit of searching to find. On the plus side, it means when you find one they’re usually pretty dedicated to it, and it’ll be worth finding them.

And some book stores will also sell comic books. The Town Crier in Emporia has half a wall (it’s a small store) dedicated to comics last i checked.

If you were going to finish your basement, mold and mildew remediation would be part of that. However, depending on your square footage, finishing the basement can cost $10k or more, and the mold remediation can cost $2-5k depending on what needs to be done. You should look into the mold part anyway for your own health, and so it’s fixed in case you want to sell your home.

Phytofed helps immensely with allergies. Just take one pill a day in addition to whatever your normal allergy med(s) is/are.