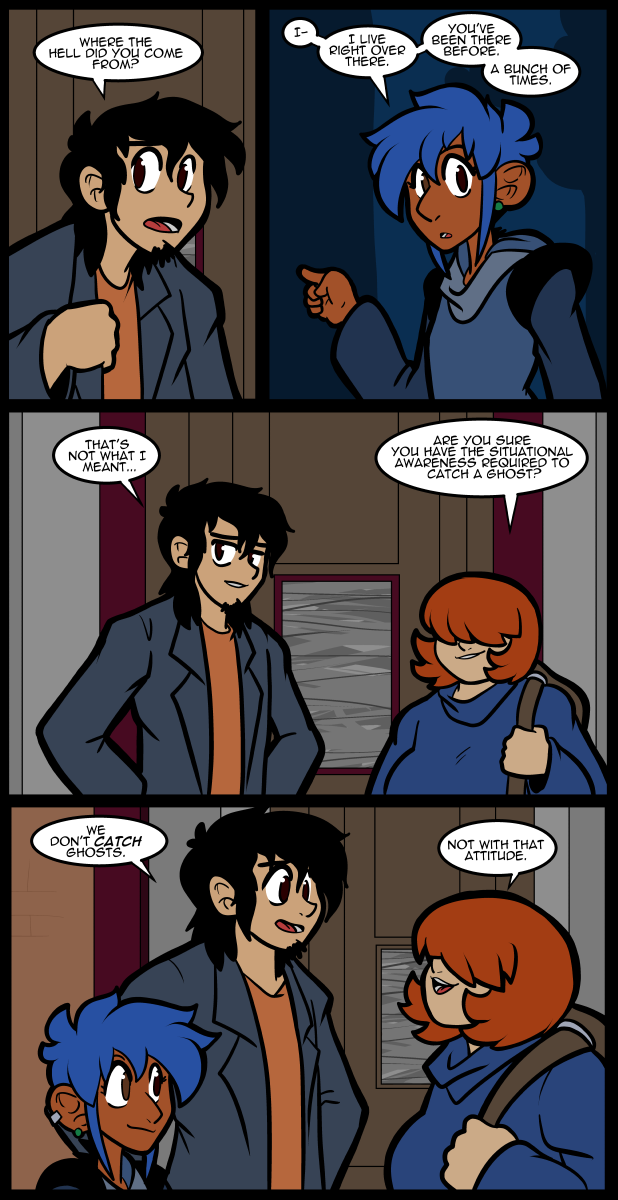 First things first, there were 32 new patron sign ups over the weekend. Around half as many as required to make up the deficit on heir own, but the first few pledged well over the dollar & made up for the actual goal number. I like a lot of people pledging a little because it’s sustainable, but I’m not going to complain when a few people decide to carry a larger portion of the burden. This comic is a luxury & I know that times are tough for a lot of people. It means a lot to know that some people care enough to pledge so much. More is always going to be better & I generally tend to see a glass as half empty, but still, I feel like this was a victory. So thank you very much. I hope you continue to enjoy my work.

I got sick over the weekend but I’ll explain that gross mess later.

Alex is really bringing it, isn’t she? Yet I’m reading something not-mean in her delivery, maybe the smile.

(Minor typo: “Hosts” in last panel should be “ghosts”.)

WE DON’T CATCH HOSTS! WE ARE HOSTS! TO GHOSTS!

“Awright, everyone, this is a raid! I’m Sergeant Syntax of the Grammar Police! Nouns, verbs and synonyms, over there, Conjuctions, oxymorons and similies against that wall, adverbs, pronouns and … you there, predicate … drop that asterisk … drop and spread ’em! We got the goods on you guys. Book ’em, Danno.”

Question: What did the kid say was all over Professor Jones shoes after escaping their dinner engagement?

He’s the Host with the Most!

I’ve been thinking “Who ya gonna call? HOST BUSTERS!” since it went up.

Well if you have 10 in a box and sharing is caring you need to a specialist to fairly cut those snack cakes down to size.

I ain’t afraida no host!

Jon is evidently not who you gonna call.

I never know whether to admire the composure or pity the lack of self-esteem that appears to be possessed by people who can put up with other people constantly ‘zinging’ them. I know John’s meant to be a little slow-witted, but surely (whether she’s just bantering or not) he can tell Alex is constantly doing this weird ‘I’m smarter than you so it’s absolutely imperative that I control the pace and tone of every conversation’ thing.

I’d be okay with it, but thinking like crazy to come up with a zinger of my own on occasion.