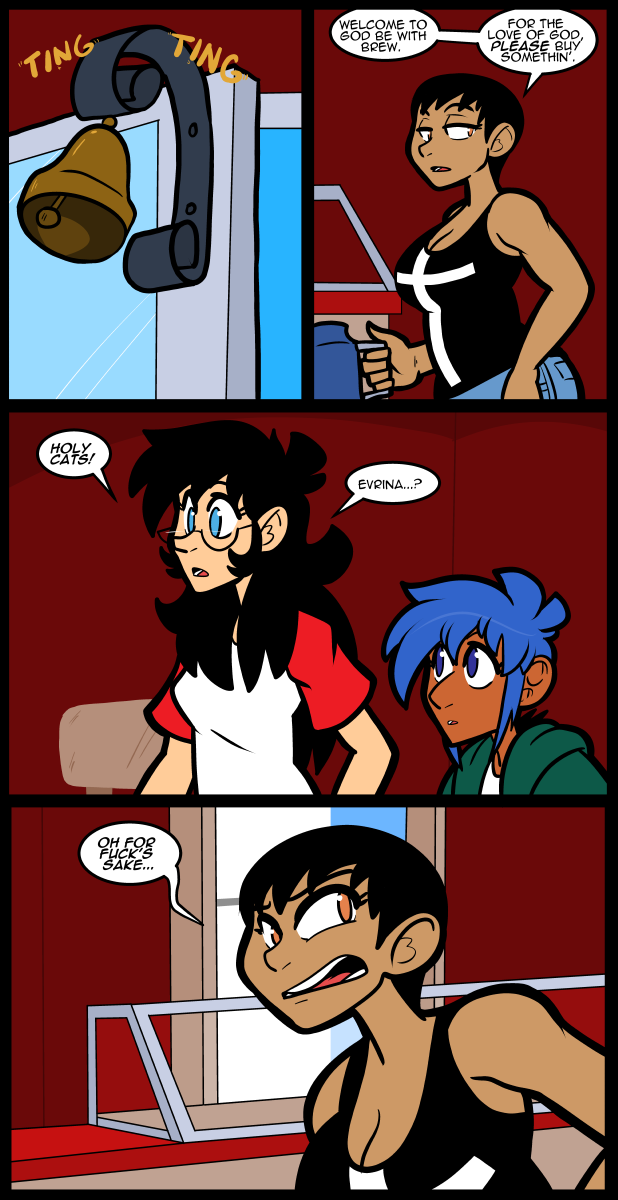 You know, this comic started out with 5 updates a week. I don’t know where that would place reaching 2000 pages in that alternate world where I was able to maintain that schedule, but I expect it would have been some time ago. I don’t remember reaching 1000 pages. At the time I suppose I thought I would always remember it. but I don’t. Chances are when if I reach 3000 I’ll have forgotten reaching 2000, but at least this blog post might still exist. I don’t know if one does for 1000. I’ve learned not to celebrate milestones since nobody I know really pays any attention to my life, or achievements anymore. There’ll be a party for the Teen’s graduation this weekend, but no one will so much as mention this. I’m long past looking to other’s for motivational recognition. I know that the people who stop by 3 times a week &/or support my work on Patreon, Subscribestar, or whatever care. I know many of them have benefitted, in some way, from my efforts. I hope I can make many thousands of more pages of this story, or if it seems right to finish it someday, that I can make another one for people to enjoy too. While I may never receive an award for my efforts I feel like I’ve made something worthy of praise. Faint praise perhaps, but I’ll take what I can get. XD

I’ve been waiting for this interaction for some time now. Since way waaaaaaaaay back. Ever since I introduced Evrina to the cast. I hope you guys get a kick out of it.

Just as a historical note, Peter Mayhew, the actor who created the role of Chewbacca passed away on April 30th. We found out today, & fans of Star Wars all over are quite sad. This tweet sums up all I feel like I needed to say, so I’ll copy it from my twitter:

Okay, I know the average person doesn’t know who Peter Mayhew is, but those kind, blue, eyes alive in Chewbacca’s face made him real. They made you belive a hairy alien could be an expert pilot, mechanic, & stalwart friend. He acted his heart out through that suit.

Punch it Chewy, all the way to heaven, you legend…

Congrats on 2000th comic, Jackie! I continue to enjoy your work s great deal, and I love the stories you tell with this cast. I’ll happily remain a Patreon supporter for at least another 2000 comics. No promises beyond 4001, though ;-)

Thanks for the support in all seriousness. I appreciate it.

“For the love of God, please buy something.”

“That’s NOT the slogan!”

On a different note- I’m sorry to hear about Peter Mayhew. He did such a great job.
It reminds me- I wish that Jackie Coogan, (who was the 1960’s, TV’s Uncle Fester), and John Banner, (who was TV’s Sergeant Schultz), had gotten more parts. It’s hard to find good actors who can also stand as good comedians. Happy trails to you, Chewbacca. *waves*

While this won’t be worth much as I have no worth to give but words and time.

Your comic shows wisdom behind words in life as it was and is and will continue to be.
A picture is worth a thousand words, and your story here is 2 thousand times that.

This story has helped me through depression a couple of times, it reminds me that ‘
“Life IS. . .” ‘

everything that happens comes together to make up everything, and while things may seem to be going shit, WE are still here.
Life Is.
Raindrops are not forever.
we must adapt and live life as it comes, for it will be here tomorrow, and you never know what it may bring. It’s most important though to try.

Well said, and a good reminder to all of us. Thank you.

Here you go, Jackie
Page 1000
/comics1/1000-exposure
while I know you could have looked it up yourself, here it is for you, and anyone else who is curious.

Looking at page 1000, it feels like it was not that long ago, but maybe that is due to how I read through this comic.
Anywho, congrats, I will continue to read for as long as you write.

To paraphrase the popular meme, your comic is good and you should feel good :)

2000. Congrats Jackie !
That’s a long way you have gone and brought us.
I hope you will be able to continue for as long as you want.
You might not feel recognized but you may one day be.

Happy 2k, man! I caught your webcomic close to the end of the Teambuilding arc, read it from the beginning, and have loved it since! Here’s to however many more your story desires!

Congratulations on 2000 comics, don’t let anyone tell you that this isn’t a major achievement (i have literally forgotten how many web comics that I have followed and enjoyed, which died with no kind of wrap-up, well short of this number), and man Evrina looks hot in panel 2!

I’ve been following for quite some time (I’m just bad at commenting), and I’m so happy you’ve stuck it out this far. Congratulations on the big 2K.

I don’t know what it is about your comic over others, but something about it and you just makes me comfortable. Youre one of the few artists I donate to in any capacity. Congrats on 2000 my friend.

Congrats on comic #2000, Jackie! As always, love the work and if you not getting the much deserved praise you should be getting on the comic from some people … as i feel like Evrina would say … “Fuck ’em” haha We’re all here M-W-F reading and it bring us much enjoyment. Thanks for all the work you put in.

Because of course they know each other!

And congratulations on your 2000th strip. There have been a lot of great ones so far, and I’m sure it’ll be worth seeing what you do next. Has been so far!

Grats, dude! Been a fun ride, and promises to continue for quite some time. <3

I don’t pop into comment much on webcomics, but I did want to say that I’ve been reading Between Failures for years and have always enjoyed it. I love the art style and characterization. I’ve enjoyed watching the characters grow and change, the story expand, and the take on the service industry life. So, thank you for 2000 comics, and here’s to at least 2000 more!

i confess i don’t remember the history here… should i head back to the archives?

I don’t think Jackie has shown us yet, what history that Jess + Evrina had together.
I think Nina + Evrina used to hang out, in their high school years.

Milestones https://en.wikipedia.org/wiki/Mille_Bornes is ephemeral yet satisfying when you do reach that point where you ask the questions – Again? Keep Going? Ice cream?

Along the way there are Accidents, Running Out of Gas, Flat Tires, Stops, Speed Limits, Repairs, Spare Tires (I have one – where did that come from?) Green Lights, There are no Limits, Ace Driving, Unlimited Fuel, Puncture Proof, and Right of Way.

So lets reshuffle that deck and see just how far we can go before the snacks run out.

Happy 2,000th strip, Jackie! Sometimes persistence is more important than recognition, because, as you’ve said before, sometimes by virtue of outlasting others with more fame you gain notariety for your consistency. Patience is a virtue in short supply these days, and you’ve proven that you have it to spare when it comes to your legacy, and that is something to be proud of if you ask me. Fame is overrated, but hopefully a little fortune will come your way eventually, but until then, I hope the meagre contributions us fans make help make life more bearable. You and your body of work are important to us, so please remember that whenever life gets you down.

To pass around another old saying that has some relevance, “Where there is life, there is hope.” I don’t remember where I heard it from, but just like the nature of hopes and dreams, though they are fragile and sometimes fleeting, they oftentimes persist with only the tiniest bit of care. I’ve forgotten what it’s like to have the dedication you show with every update, and it’s been even longer since I had a goal as meaningful as yours, but everytime I read about your struggle in your blog posts and see your comic, three times a week, I’m reminded that it is **possible** to pursue a lifelong passion, and that is meaningful to me. I’m not in the right frame of mind to find such a thing for myself, but I hope that someday I will be, so thank you, Jackie, from the bottom of my heart, for sharing your work with us. It has more significance than you will ever know.

Your efforts are appreciated. Hopefully you get as much enjoyment as we do.
Revel On!

Sir, please accept my felicitations on this your 2000th page. Labor omnia vincit.

Hard to believe it has been 2000 pages, this comic has been an important part of my weekly routine for so long now, and it quickly become on of my favourites. I have been here so long I don’t remember when I first discovered it, I would guess somewhere between page 500 and 700. The longer this comic goes, the more I love the comic; the way you craft a story, the way you manage to juggle your cast of characters is brilliant, and watching your art style evolve is almost as much fun as seeing the story unfold. Anyway, congrats on a major milestone, very few webcomics make it this far.

CONGRATS ON 2000!
Ah, such improvement from strip (oops poor choice of words?) one! Gosh, I’m so happy for you here. Here’s to [obtainable amount] more! <3

wow what a journey to get here, congrats crave! Thanks for making this a joy to read all these years. Too many comics added drama or agendas and stuff just for the sake of appealing to a group or to grab readers, but I think your characters sell this, watching the story unfold how it has to this point has been wonderful. I know things are hard and taxing on you, but I do hope this keeps going for many more chapters, but do take care of yourself too!

Thank you for your work, Jackie. There’s a part of me agrees with you about not getting validation from others; it’s a way to protect the emotional squishy bits, and a reasonably effective method most of the time. Finding equanimity with praise or lack thereof is a process. (Maybe someday I will crack the secret.)
Many congratulations to the teen on her milestone as well.
And roll on Evrina & Jess’ arc.

You don’t need to attach meaning to it – but just a small honest happiness celebration does wonders, just to reinforce the joy and so you like doing what you are doing…when you’re doing what you’re doing. This is the true one, my friend.
Also – it sounds like you are actually celebrating in private.

Now, recognition or critical acclaim – have you tried for it, submitting for a specific award, and gotten a reject? This comic easily topps ‘FRIENDS’ for me, and we know how popular the show was. I hope to see BF adapted to other media one day.
Or family praise…have you tried picking a family that praises you any day? Choose wisely – or often. The extreme is just to marry a coach. Anyway, they may not have your interest and expertise in the matter, but then they are all the more likely to just copy your attitude and mirror it. Being misunderstood is the curse, but ouput is the hallmark of a true master.