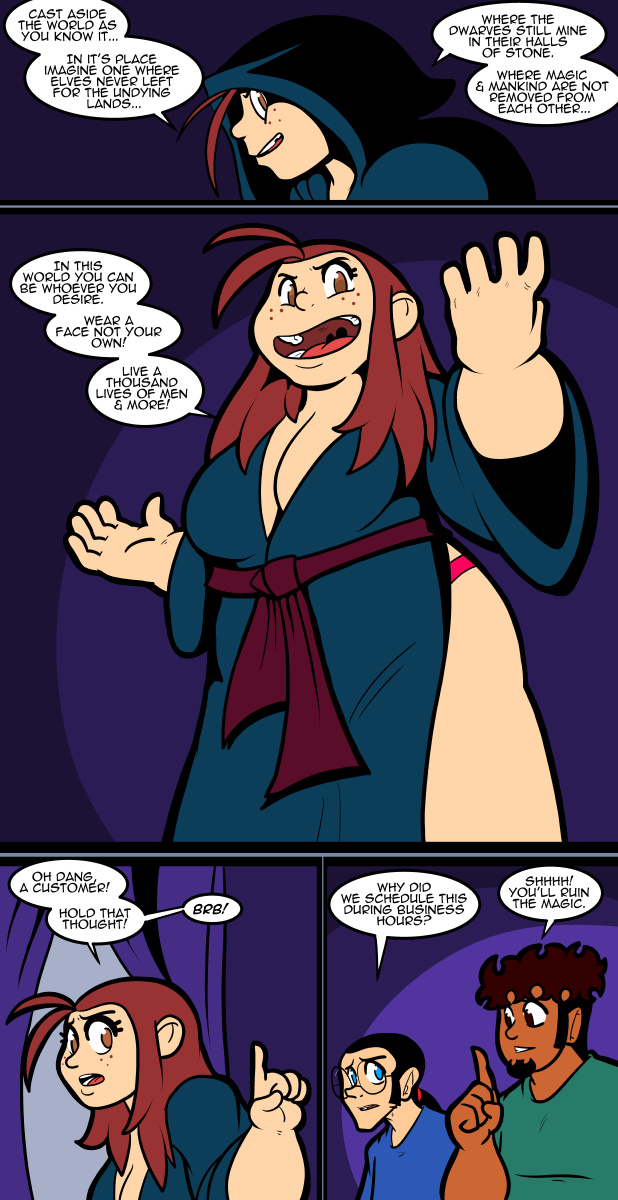 This is something most people will only see as my male gaze showing through, but in my mind Patricia dressed up in her dungeon master robe to sell the experience, but didn’t take the extra step of making her panties match. Which is kind of how her personality is. Kind of dedicated to her goals, or whatever, but also a little low effort. Also she dresses provocatively because she likes the feeling of power it gives her. Even though she’s usually pretty standard, in her element she wants to express herself as still sexually attractive. As she’s the oldest female cast member she’s probably beginning to worry about her age on some level. Although, honestly, if she was okay with choosing a nerd she could probably have her pick of them. It might be that she’s only ever come in contact with the sort of cheese smelling dudes who make it hard to sell Magic The Gathering cards to normies. Thomas grew out of that phase of his life, but that’s certainly not always the case. And if you don’t want to clean up, or change, that’s perfectly fine, but don’t fool yourself into thinking that everyone is going to see it that way. I’ve certainly seen some preppy nerds. Traditionally attractive nerds do exist, but in the same percentage as attractive people do in other groups. You can’t always catch one. Patricia is a bit on the sloppy side herself, and not everyone’s cup. That said, she has a lot of fans for a character who has had limited screen time. Her type has a fan base, that’s for sure.

No problems with this visual what so ever.

you’ll need to do a DC of at least 16 to resist that cleavage, my dudes

With a couple of saving throws as well

That would be a will save then …. and wisdom is a dump stat for most.
Wisdom is the difference between Common Sense and Good Sense.

What kind of Armor would protect you against that? Dwarvish? Or Elvish? Mordorian? That’s the kind of pandering that gives nerds nose bleeds IRL. I’m glad she does it, because she feels in control and not to please someone who controls her.
I Love love them all, (except Ervina, her I love to hate). Jackie, you have the best characters.

There is no armor class that can help with that save. However, there are several that give you disadvantage – skintight leather, for example XD

Patricia would never go for a nerd though. According to all you’ve made her, she is the master of the nerd ways, and would thus have the drive (and the leverage) to choose someone outside that tribe to complement her.

I think the case could be made for it.

But why would she want to?

I asked my question wrong. I meant, why would she want to choose outside her “tribe”?

That was me, your ol’ pal StraightFace above, btw.

I mean by choosing outside her tribe a combination of conscious and biological forces. People mate for genetic stability. And people seek partners who have something they don’t (and can get it if they’re high status).
Pat is pinnacle nerd. She is a veteran dm. And she sells nerddom to nerds as her business. The owner of that business. She’s transcended the category of people Jackie started this convo about. So she, and her neurobiology, have every reason to look elsewhere for that costly pairbond, and little reason to be just “okay with choosing a nerd”.

IMO,
Not that I mind,… but- I don’t think that many, or any, women in the USA, would be a game master, and show that much of her/their lower body.
If a woman did that in real life, with [the teen boys in D + D that I know], and [the D + D playing men that I know]…these not-smooth-with-women-guys, would quickly- jam pack her two-room store with 400 men!
Yikes.
[My apologies to all D+D games players, and all other role playing game players, out there.]
Some actions I only recommend, for comic characters. ;)

I think you underestimate the morality of nerds.

*gives you a humble bow*
You’re probably right on that one.
Most US nerds would probably behave, but- the D+D/RPG game, male nerds that I’ve known in the past, had their own brand, of- very…very…non-debonair-type, lechery. :)

I dunno man, I think you’re judging a very large group of people based off a small selection.

Most of the d&d nerds I’ve known (and by known I mean chosen to associate with) are pretty normal folks. The guys you’re thinking of tend to be the relative minority these days, and luckily many grow out of that.

I can remember one game I played roughly 5 years ago, one of the players, a girl, decided she’d throw pixie sticks into her mt. dew (she was an art major, didn’t know about nucleation

Anyway, her soda exploded and she was soaked.

Played topless, got looked it for a few moments and then game just continued. She didn’t care, and once the general novelty of new boobs wore off, neither did we.

And to be fair, she was offered shirts, she just didn’t give a damn.

Um, no offense meant, but- if you look at my original post, I said that [most of the RPG players] that I KNOW, would act this way.

Other than those people from my past, I am not [judging] anyone.
In the spirit of some 1940s authors, I’ll opine- there are gaming men, and then there are gaming men.
My being unfair to gamers that I know, which I believe no one else on this site knows, does not mean that I am unfair to all gamers everywhere.
Short form- if I am crappy to my friends, that is only between me + my friends.

Trust me when I say that you GREATLY underestimate the depravity of like-minded people in a small room. It was this very situation that led a girl in our group to, ah… show off the results of a quickie with her boyfriend at the table.

What I’m saying is that gamers aren’t rapists. If it’s consensual that’s a whole other thing.

Oh, most definitely not rapists, at least no more so than any other group. I was more referring to the assertation that a woman would not be 1) a game master, and 2) show skin and/or private things. A woman who is completely comfortable amongst their circle will often be quite scandalous in my experience, which is not a bad thing in and of itself, though it can result in many an awkward moment.

That matches my limited experience.

Heck. Maybe I worded that poorly.
I was trying to imply that I knew a lot of players who would become excitable lechers in this type of situation, not that players would do crimes, in this situation.
Please pardon it, if I’ve implied that players would be criminals.

There are a few misogynistic pen & paper player out there (I can cite at least one) but I don’t think there’s more than anywhere else. Of course she can’t do that with anyone but as we have seen she’s pretty selective on who she plays with

I agree that those panties clash. She should probably remove them immediately. ;-)

Haven’t posted in a bit but I have two points to make. One, that may be the greatest, I assume, bathrobe I’ve ever seen. So hard to find hooded ones these days. Two, since no one else seems to have dressed up, Rulette is really going the extra mile here!

If we are looking at high levels of Game Master “Awesome” beyon just dressing up….
[LEGO theme kicks in on the hacked muzak – you are welcome – ebil cackling ensues]

Next she hands everyone a folio and pulls out a compartmentalized tray of minis …. or if we are next gen ….. a tray of LEGO minifig parts and accesories ….
The folio contains local history and background of the world as it is known as well as character generation rules.
Then the bookcase is pointed too containing ALL THE BOOKS.
… nerding happens … Character sheets are filled out and minis selected …
Our GM opens the scene where the characters meet and introduce themselves … Background music is now softly playing to match the scene … its an inn of course….

A great introduction, and the costume, such as it is, helps. (Though it’s just possible she hasn’t looked carefully in the mirror). I suspect she knows her players well enough to know they’ll behave – and it IS in the shop, ie a public place.
I wanna play!

You are allowed to make cool characters who are woman & who like to be alluring.

Don’t let the verbiage of intersectionality keep you down.

In the first panel the robe seems a little much. The second seems a little… less? Lacking? What’s the opposite of ‘much’?
Anyway, I agree with most of the viewpoints, and think it should be noted she at least somewhat knows the guys she’s playing to, and has some idea of how they’ll react.
Am curious how much thought she’s given to the reactions by customers, but occurs to me that such an outfit can vary quite a lot in how much it covers with a few very minor adjustments and changes in your stance. Wide stance, one leg foreward, show off the slit up to the hip. Closed stance, feet together, and most will never notice the slit at all.

The counter also grants partial concealment. So the customer has to be pretty perceptive to notice her hips in the first place, slit skirt or otherwise. Fun thing about that style of robe is that she can also give that drawstring a quick tug and the neckline stops showing boob, too.

I had forgotten about the counter, and I’m going to guess regular customers are used to such things.

In other words, play up the “forbidden fruit” gimmick to maximum effect.

This coming from the guy with the mostly naked pig girl mercenary?

Your writing style is not always easy to parse when it comes to tone.

I get that a lot