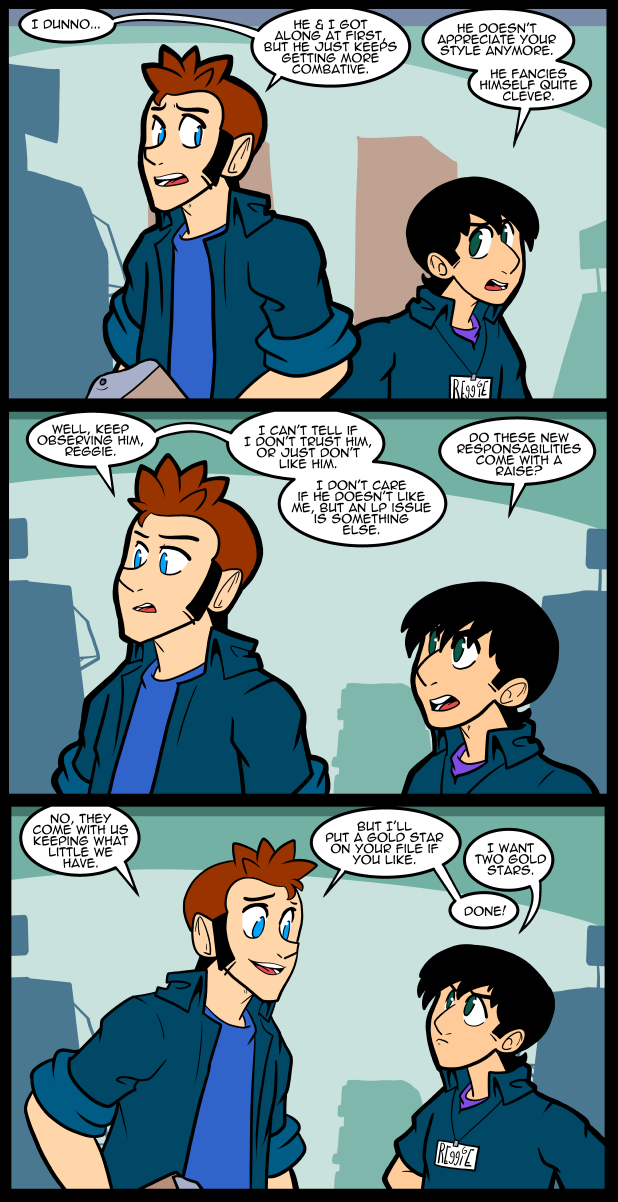 Reggie probably doesn’t realize it, but Thomas giving oversight of Wes over to him is a clear illustration of the actual respect he has for him. Even though he might mess with him relentlessly, he trusts Reggie’s code of ethics. Even though Reggie’s code is a bit skewed he would never lower himself to allowing thievery. Reggie might not be deeply loved, he may be accident prone, but he can be counted on to try his best. He’s worthy of trust in several key areas. Regardless of his place in the hierarchy he’s a member of the team. More now than ever before.

I like the expression that goes along with “I want two gold stars.”

Yeah. He looks like a petulant child. It’s pretty funny.

I get the vibe that Reggie is taking that last snarky remark and playing it off in the same vein. ….. Hold on here …. This exchange feels so very familiar ……

Ack …. Reggie is the Baldrick to Thomas’s Blackadder….. It all makes hilarious sense now.

I wish it made sense to me. Is there anywhere I can go to legally watch Blackadder for free in the United States?

Try your local library. If they don’t have it, they might be able to order it in through interlibrary loan, or from the system/consortium/sharing group, if they are a member of one.

Netflix. You can stream it or get the dvds delivered, if you prefer.

You know, with each page he shows up on, I tend to like Reggie more and more.

I was just thinking how I used to absolutely despise Reggie, but now I kinda love the guy. Platonicly, of course.

If you look back through the archive, there was a time when Reggie could’ve cured cancer and people would’ve commented that they still hate him.

I think it’s a mix of us getting to know him better and his head gradually emerging from his ass.

honestly I think it was that whole furry arc, before that he was pretty insufferable. But a little back story, him putting asshats in place and just generally using his asshole nature to be awesome goes a long way for redemption.

To a degree, “using his asshole nature to be awesome” describes Thomas as well, he just started closer to magnificent bastard and was the initial viewpoint protagonist so he gets more of a pass; Reggie just needed a chance to show his awesome.

I like his attitude-
put the two, gold stickers in my file!
I want [something] outta this, dammit. :D

In any negotiation, never accept the first offer!

Which one is that in the listing of “The Rules of Acquisition”?

Just then…Reggie turns to the crowd, and says: ” You’ve got the WRONG Ferengi!”
:)

Need some help here, brain not cooperating. “an lp issue”? I am not groking this.

He is the one getting combative? He asked for an opinion and Thomas went all “I’m better than anyone in this store and basically you’re all idiots” for which Wes just went back to work.

The line implies that it’s an ongoing problem. It’s meant to show that their relationship has been deteriorating without having to spend two years drawing it all out.

“And if you even go to the arts & crafts section and pay for them, I’ll even let you put them in yourself!”

This is completely unrelated and feel free to ignore this comment, but today’s comic title just reminded me of https://en.wikipedia.org/wiki/Golden_Boy_(manga)

The only Golden Boy that matters to me is one Kintaro Oe.