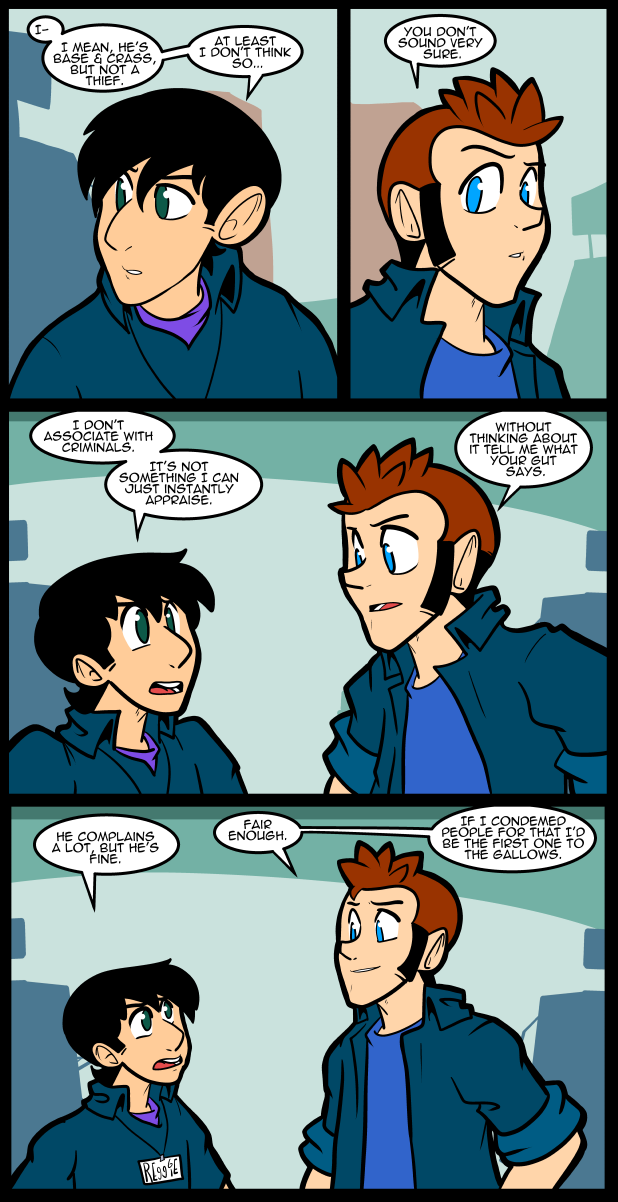 I’ve felt like crap all day today. My balance is screwed up. My eyes burn. I think I might have a low grade version of whatever dad has. He was dizzy at the start of it too, but it may just be an unrelated thing with the same symptom. Regardless it it’s making things any easier.

The other day I leaned over to do something and partially threw up. Have you ever done that? Like not puking as such but an amount of stomach acid just comes up somehow? Anyway it went up into the back of my nose, which ould have been bad enough regularly, but I had been eating something very spicy, so it was worse by an order of magnitude. At first I though I was going to choke to death because theshock made my breathing get out of sync. The burning sensation was also impossibleto wash away becauseit was above my throat. Maybe that’s what’s wrong with me now. Some kind of ear infection from that. I tried a nasal rinse but it wouldn’t work because everything swelled shut for a while. I just hadto rideit out.

Last night I was using a motorized pumice stone on my foot, which makes a significant amount of foot dust. That’s gross enough on its own but I also had the space heater running & it was too close to what I was doing. The dried skin powder got on the heating elements & I slowly realized what washappening when the room started to smell like a crematorium. It was so bad I had to leave the room. It also took hours for the stink to work itself out.

All inall this is not an auspicious start to the week.

As you can see I have also not replaced my keyboard.

Having the content of my stomach coming back to my throat used to happened to me quite often. I don’t really know why it happened nor why it stopped. Eating too much, too sour ? No idea.

I’m sorry to hear you have been having a tough time lately.

Also, I very much enjoyed Thomas’s final comment in the last panel. He’d be the first one to the gallows, indeed.

Get well soon, man. Chili con sinusitis is no fun at all.

For a time I lived in an apartment, across the street there was a burger king and a crematorium, sadly the crematorium smelled better than the burger king.

Laughing so hard it upset the cats. :D

I’ve had stomach acid come up like that, the partial almost vomit thing.
In my case it’s a result of acid reflux (aka GERD), there’s a number of medicines and tips that help limit it; if what you have is gerd:
https://www.everydayhealth.com/gerd/preventing.aspx
there’s also some OTC medicines like prilosec that can help with it.

Try just a teaspoon of baking soda in a glass of water but only a couple of hours before or after you’ve eaten. This will neutralize stomach acid, and if there’s food in your stomach, it won’t digest properly.

You’d be surprised how many criminals we associate ourselves with in an everyday basis without knowing, Reggie…

With the number of absolute bonkers laws that are on the books plus the “I thought it was illegal” pass given to Law Enforcement, everyone is a criminal every hour of each and every day.

I maintain that ignorance of the law is an excellent excuse. Have you SEEN the law lately? It’s like several phone books glued together. Worse, it’s written in a language that specifically requires years of study to understand: lawyer-talk. How regular people are supposed to be sufficiently versed in this arcane language to actually survive is beyond me.

Agreed. OTOH, some criminal types are more obvious than others.

The issue with this particular individual isn’t that he’s greedy (that sort of individual would mount a careful campaign of theft to resell stuff on eBay later, targeting items specifically for that purpose–so physically small, but high-priced and desireable, like appliances), but I could easily see him falling into the category of innate arrogance that leads him to believe it doesn’t matter if he helps himself to something–it’s not like the store ‘matters’ to him in any way. So he’d steal shit for personal purposes, almost without thinking about it.

Mark Twain once noted that, if you eat a frog first thing in the morning, nothing worse can happen to you for the rest of the day. I don’t know whether he had a point or that’s just blind optimism.

Fun factoid: Frog legs used to be a regional restaurant specialty in Detroit. Before industrialization destroyed all the wetlands.

Too bad Twain didn’t get to comment on that.

Looking at twitter-
Hi Jackie,
You said your dog was spooked by the sound of a spray-cheese-can’s noise.
The sound of the spray might sound like a hissing, angry cat. Maybe that’s what it was.
And this has been my science tip of the day. ;D

I’ve never heard spray cheese make a noise. Besides she’s scared even if a container is just sitting where she can see it.

Huh. Yeah. That’s odd.
Maybe the cheese smells bad to her, or something.

NO! something horrible has happened I’ve caught up with this :(

There’s an old military saying: “a soldier who’s bitching is a happy soldier; it’s when the troops get quiet that you need to worry.”

Wow, Thomas is a real jackass for heaping his suspicions onto Reggie like this. He’s basically forcing him to tie his reputation to an official statement on Wesley. This is just a complicated, manipulative way to pass the buck and perpetuate tribalism.

Not really. Remember, they work for a company that fires the entire staff when a store has a theft problem. If Reggie is wrong it means everyone loses their job, and it won’t matter whose fault it was.
But Reggie is the person who has worked with “his minion” the most, he is in the best position to judge Wes, and he won’t protect Wes if he DOES think he’s stealing.

Thomas is placing an immense amount of trust in Reggie, because he knows Reggie is worthy of that trust.

I guess that should be, “condemned”, and all of that.