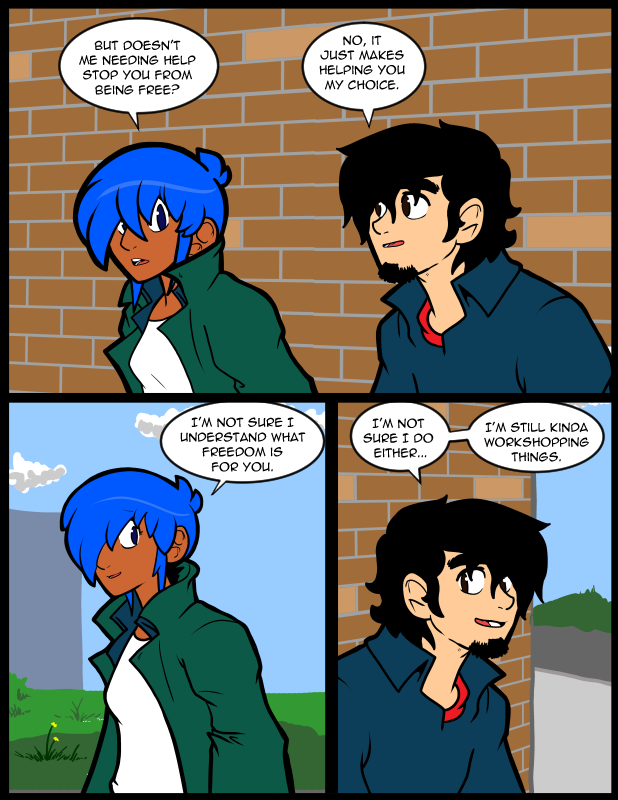 I think media trains us to expect that every person has this completely thought out philosophy about how they live, but in reality a lot of people have sort of a nebulous idea of why they do things that they never really articulate out loud. I also think that social media has caused people like that to have to stop and try to come up with something on the fly and it doesn’t always work out. Unfortunately they don’t get the chance to keep evolving the concept, they just get attacked, double down, or any number of bad outcomes. At this point I don’t think there’s any helping that. It’s just how it is now & if you don’t take some time to figure out how to express your stance in a way that isn’t adversarial you just have to take your chances. Even then it’s something of a crap shoot.
John wants to be independent, self reliant, and free to do what he wants. At the same time he’s not against entanglements with other people that might tie him down to a particular location. On some level those are opposing viewpoints. Most people are in conflict with themselves in some way all the time.
I cause strife in my daily life constantly & seemingly for no reason, but write a story largely about avoiding conflict, or resolving it peaceably. I am confident and forceful in many of my interactions but shrink into convulsions when trying to do things by myself. Some aspects of my personality are so wildly in opposition to each other it’s a miracle my brain doesn’t simply hemorrhage just to end the suffering. That’s just how things are sometimes. People are kind of bullshitting their way through life, not knowing what the point of it all is. It does seem pretty clear that the whole system was set up to be annoying at the very least though.

I think what John is saying + your commentary make perfect sense. To me, he wants to be free to choose how to live his own life, but that doesn’t necessarily mean to be free of personal relationships. If he chooses to get involved with people, them eventually needing him is just a result of his freely choosing to get involved with them while knowing what it might lead to.

After all, being in relationships of whatever kind is always a continuous choice, until one of the people involved choose to no longer be a part of it. To freely and continuously make the choice to be a part of any relationship, for whatever good or bad it brings, is a form of freedom. Maybe I’m rambling, but nothing of this look in any way contradictory to me.

Also, I very much enjoy your insights on people and life, Jackie. I feel like I have learned a lot of perspective just by reading your words on the blog over the years. Thank you for sharing all of it so far, and here’s hoping there’s still much more where that came from.

John’s desire not to be tied down and be independent, and his desire to befriend and support Jolene (and by extension the rest of his workmates), are not necessarily mutually exclusive. The freedom to “do whatever you want” also includes the choice to help others and be civil, a viewpoint vocally boisterous “freedom fighters” tend to ignore when they use their freedoms to wreck one’s shit.

I think John’s idea of freedom ties into a wonderful thing an ex once told me while we were dating: “I don’t *need* you around. I *want* you around.” :)

Freedom is to a degree, self limiting. A feeling of freedom comes from a perception of choice. If you choose to follow one path you give up the freedom to follow other paths. Some of the most important decisions I’ve made in life didn’t seem important at the time and were made for dumb reasons. Conversely, some of the paths that I sweated the most over and worked hardest for also were the most painful.

The DNA quote is 2 quotes put together, with a piece cut out of the middle. Might want to use “…” to show the gap.

“At this point I don’t think there’s any helping that. It’s just how it is now & if you don’t take some time to figure out how to express your stance in a way that isn’t adversarial you just have to take your chances. Even then it’s something of a crap shoot.”
–
I’m trying to turn this on its head and play. I refuse to take offense from people who haven’t thought things through. Most offenses are not even offensive anymore, the dictionary needs an update. A bastard is a patchwork kid, a son of a bitch is a guy with a hot mum. Fathers and lineage don’t define life opportunities the way they used to…
Even if people try hard to be offensive, I tend to deny it if it’s not a watertight curse. Most wannabe offenders are just the fellow poor suckers, wanting to express some part of themselves that they have been denied, and failing in an endearing and often obnoxious way. Then I annoy them with options, kindness, and rationality, which sometimes makes them feel bad or go into their shell. That’s sad probably, or a helpful experience. I’m not sure. Not being the manager of people’s feelings, it’s not my responsibility to control them so they are forced to be happy, if they don’t want it. It’s an option. Do I need to be right? Hell yes, I know I am … I mean, no, *humble grumble*. Do I need to listen to crap from folks regurgitating yesterday’s political correctness conventions at me? No. I know that already. Do I have to assume someone is there already. No. Low expectations get surpassed more easily, but high expectations also motivate people.
It’s been helpful to remind of basic standards of good thinking, civility, and fair talk, like ProTruth Pledge. The way a slightly annoying mother reminds the kid they are about to forget their gym bag. How do you argue with that? Counter-obnoxious helpfulness. It’s likely one of those soft superpowers.

John is basically (though I’m sure unintentionally) echoing Ayn Rand; freedom means you are allowed to do what you want, so long as you don’t hurt others, but there is absolutely nothing wrong and everything right with helping other people, so long as it’s something you legitimately WANT to do and not something you are being guilt-tripped into doing or, worse, forced into doing against your will. Like, helping the poor is great, but that doesn’t mean the poor get to mug you in the street, or that your boss is righteous to fire you if you don’t give away all your money.

While Jackie, your post also mirrors some of what she wrote back in the day. Rand actually admired old-school Communists, particularly Trotskyites, not because she agreed with them, but because they consciously developed and adopted a framework of how they see the world and how they wanted to live and shape said world, which they committed to. This used to be more common–people had a deliberately paradigm. Now, most people don’t; they just vague notions of right and wrong, mostly what they learned in primary school (with the corresponding rigor that implies) and stumble through, and the idea of adopting a moral philosophy is seen as automatically close-minded, or just pretentious claptrap. Ironically, some of those same people are also the most…emphatic about their moral causes; they refuse to create or adopt an entire worldview, but they will fight viciously for some isolated cause they don’t entirely understand because they reject it’s context. And it’s absolutely true that social media encourages those kinds of people; in those rare instances I look at something on Twitter, I’ll see a string of 10 posts someone put up with charts and stats and arguments, and the top rated response will be some snarky, disingenuous reply to a single, cherry-picked line. Even when I disagree with the 10 posts, they at least deserve an intelligent response.

Gotta appreciate a guy who has pretty strong opinions about what he wants for himself but also openly admits he hasn’t got it all figured out. “From the place where we are right, flowers will never grow,” and all that.