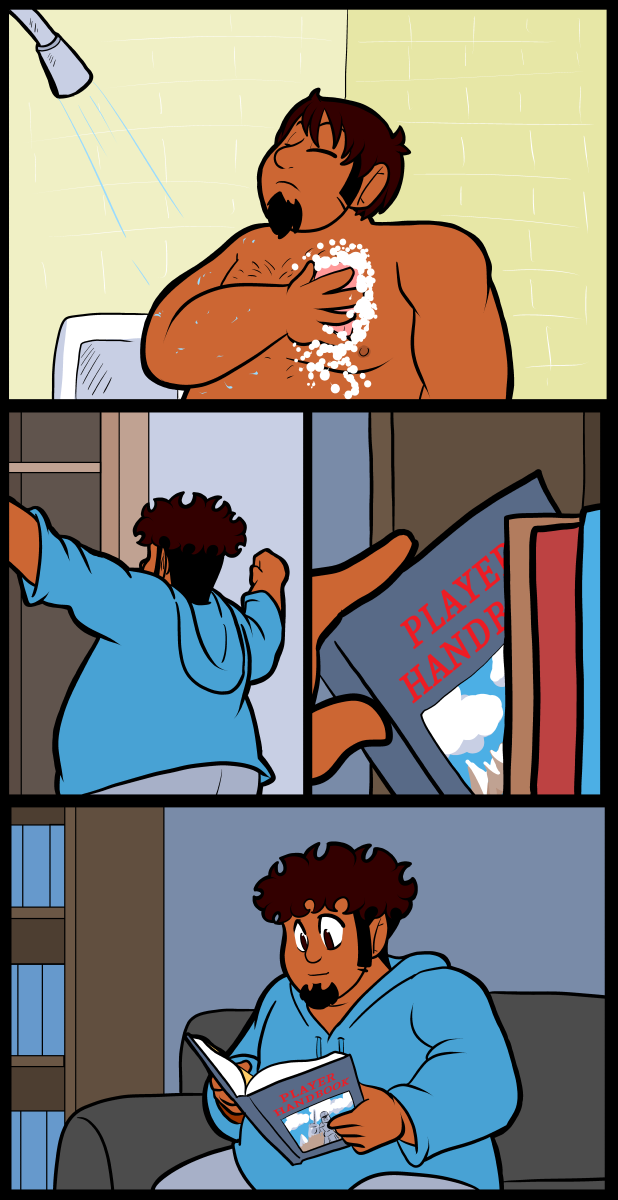 I remember these nights. Coming back to my empty apartment, after having cast out my friend/roommate. It was desolate. Looking back I’m not sure how I lived that way. Maybe it’s easier when your younger. I was never more than 30 feet from another human, but they might as well have not existed. The old man who sang hymns at random times at all hours of the day, until he rode out one day on a stretcher. The lady who had the cat even though they weren’t allowed. Who’s family came over early on Sundays & made insane levels of noise. I was a good neighbor in that I kept each of them from hearing the other. I was insulation. Quietly watching movies, or reading webcomics.

I disabled the Discord link because a bot army has been invading many discord servers, so until that’s taken care of you’ll have to ask me for a link. I’m almost always around somewhere, so if you get the urge to look in just tweet at me, or something. I notice twitter the most, so it’s the fastest method.

Sounds like you had a mixed bag of humanity around you then, i know that feeling of trying to be invisible so you would be a good neighbour.

When we moved from an apartment into a townhome (that was built in the 1950s) the noise level went from ambient, to nil. There was not a wall, that was put up by the guy who owned the building in the 1040s, between us and the next person, there was a freaking CinderBlock Wall, not plaster, not sheetrock, concrete cinder blocks! The level of quiet was at first disorienting.
Frack! Whats that weird noise? …. It’s still there, what is it? Oh, I can hear my own heart beating. That freaking quiet. I could hear the cats walking down the hall (bare wood). It was glorious!!
Then we moved closer to O’Hare. Ugh!

That’s a thing which really surprised me when I first came to the US. British building codes are very different and stud walls are only permitted between internal rooms, and not always then.

Apart from anything else, I suppose the U.K. ran out of home-grown commercial building timber a long time ago but we still make bricks in large quantities, and concrete too. Breeze blocks are a popular material for internal construction (cinder blocks, to our American cousins) but that uscdeclining as we move away from coal fired power stations.

I still come to Florida every couple of years, and have family in Texas and their houses always feel like huge empty packing cases!

I have noticed that as well here, a village just outside Toronto, when it comes to townhouse and condo construction.

Back in the day there was a cinder-block wall between units from foundation to roof and in some older construction even higher. It was all about fire safety and durability in the building code. Developers got richer and got the laws rewritten to help control costs [yeah, right] and now newer buildings will doubtfully last more than a generation without due care.

Then years latter everything became stick frame construction from top to bottom. Brick was just a veneer like plaster or wood siding.
[I wont even get into that bit of stupidity regarding plastic siding]

Now it is not even that. The latest units to go up in my neighbourhood a few years back were sheets of chipboard with just enough “timbers” to stiffen the things up. During construction they skip every third unit in case of fire during the framing phase. Yeah those things go up like kindling and the flames are oh so colourful, no doubt due to being more glue and solvents than actual wood.

Just to give you some idea how shabby the construction is now, the newer builds are looking in worse repair after 3 years than their 30+ year old counterparts.

Concrete block (no one uses true cinder block anymore) walls, foundation to roofline, between units in an apartment building are required by building code. A typical garden apartment is a hallway/stairway with apartments on either side. Call that the basic block of the structure. A concrete block firewall is required between each of those blocks. Townhouses, where each unit has its own entry to the outside, a firewall is between every unit, or every other unit.

Modern construction, called lightweight constructions, is all light wood- 2 bys (2 x 4, 2 x 6, etc.) and plywood. Burns really fast. Add all synthetic, i.e. plastics, in Bothe the construction and the furnishings and contents, and we have created something deadly in a fire to both the occupants and the firefighters.

Jackie, I’m not on Twitter, but I read the sidebar on this site. I know who Bakshi is, and I like your thoughtful observations. He had promise at at time when animation was pretty much derelict, but most of his features looked like he ran out of money or time somewhere in the middle of production and just stopped work. You really saw that in Wizards and LOTR. I liked what I saw of his Mighty Mouse TV series, though.

Saw that Fritz the Cat is on YouTube, but don’t think I could bear to watch it again. :)

These are just my thoughts on Bakshi’s films:

–Fritz the Cat: I only saw the first 20 min. of this film, + then left it. I think one of its thrills is that “your parents don’t want you to watch it”.

–For fun stories, that are worth watching, I really like- Wizards, ans American Pop,

–Hey, Good Lookin’: is kind of fun, if you ever thought that The Fonz…and Happy Days, + the film, Grease, are fun.

–Cool World is kind of fun.

Other than that- I think that Baskhi’s films are [pop culture things], sort of like custom cars by “Big Daddy” Roth, or Songs by Mick Jagger.

But then- I’m guessing that Bakshi has never claimed that- his works were more than pop culture things, that can be sometimes clever…, and fun to see.

Is that the ‘TRAITOR!’-shouting First Order Stormtrooper on the cover?! What game’s this Player’s Handbook for?

I didn’t want to make it a specific book, so it’s sort of a generic knight on a D&D esque handbook.

Good call. Ever since Hasbro [the evil American Empire that though it could bully Bandai] took over WotC and a few other old time game manufacturers like Avalon Hill, the Lawyers have always been on a loose leash when it comes to creeping IP and sheer belligerency.

As an old-time hex-and-counter wargamer, I felt that Avalon Hill was pretty much done when they were bought by WoTC. They went from an industry leader to just putting out endless variations of the same game.

But you’re right: Hasbro hasn’t improved the situation any. To be fair, though, Avalon Hill is no longer a company; it’s become just a brand name (like TSR).