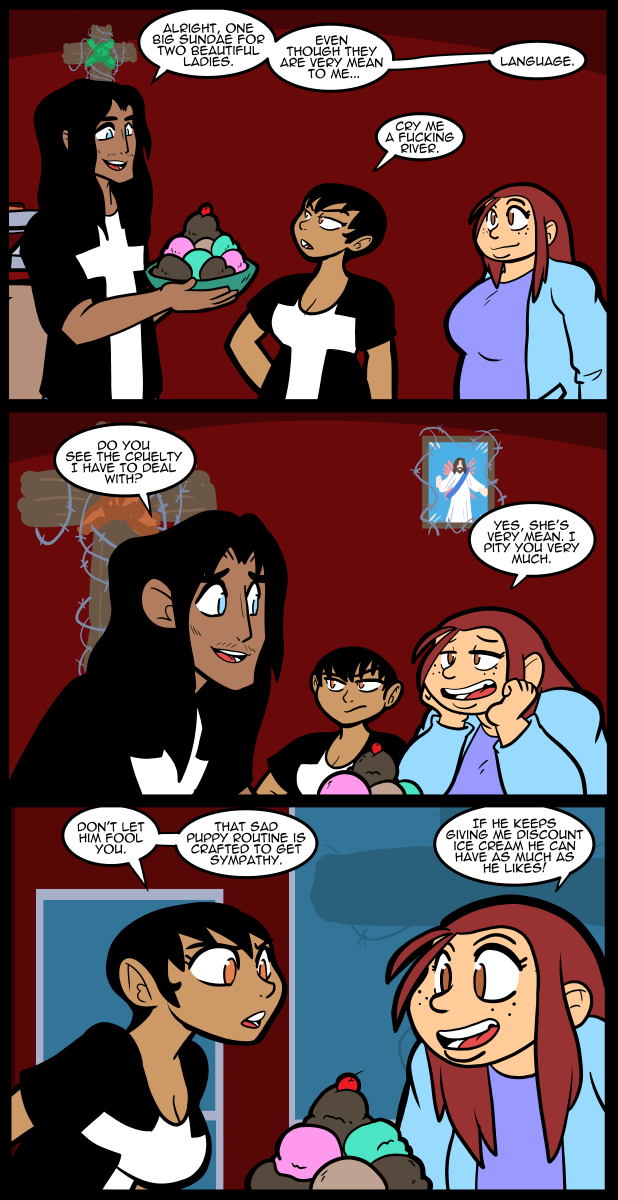 You know, I don’t like amusement parks or fairs, but I do like videos about their histories. I know a lot about theme parks from youtube. Knowledge that will help me in no way at all in my life. Learning stuff simply for the sake of learning, while I do the same stuff I do every day, makes me feel like I’m doing something worthwhile with my time when actually doing stuff that’s worthwhile doesn’t because I do it all the time. Is that weird? I bet it isn’t. It’s certainly more fun to watch stuff about theme parks than the social commentary stuff youtube is always serving up to me. I mean I can’t stop myself from watching out of curiosity most of the time, but I usually don’t end up happy after. I like knowing about what’s happening in the world, but maaaaaaaaan. I think everyone is getting numb to all the stuff getting thrown at them all the time in the news and stuff. Which is kind of good because eventually it won’t wear us down anymore and we can start fixing stuff.

“Dignity and an empty sack is woth the sack” Rule of acquisition 109. Thanks for proving that Rulette.

One that I like to read about is Deno’s Wonder Wheel Amusement Park [R], in New York City.

You can read about it, here:

It looks like God Be With Brew is also a Christ cream shop.

I’m a bit of a theme park junkie, considering I grew up in southern California where we’ve got FOUR major theme parks (DisneyLand, Knott’s Berry Farm, Universal Studios, and Six Flags Magic Mountain). I even worked at Knott’s back when I was going to college.
So yeah, I do enjoy the videos about the history of theme parks, rides and attractions that have been lost to time (or lost their corporate sponsorship).

There seem to be a number of abandoned theme or fun parks in the (ehemaliger funfzehn nue laende) [Former] East Gerrmany, and one or two near Tchyrnoble, not sure if it is one park with two photogs submitting the site, or two different sites, but there are creepy photos on line. Search “Abandoned Parks”. Pretty fun/creepy!

Jackie, I love your decision in the first panel, to break with convention and have something sticking out of his head. First thing we were taught about doing backgrounds was “if you put a lamp post, fence post, doorframe, or tree coming up out of someone’s head, you get a zero for that project so don’t bother turning it in, if you do that.” But sometimes it is too much fun, or there’s a politcal/practical/probable reason that it has to happen. So thanks for that. Great fun!

I can’t just establish the space they’re in then change it to suit some arbitrary rule.

Rules are there to be meticulously broken.
Without rules there would be chaos and more works by Jackson Pollock.

I don’t like amusement parks, either. I’ve got sensitive inner ears so rides throw off my equilibrium very easily. The same thing happens from changes in altitude, I’ve hiked a few mountain trails in my life and if I’m not careful the altitude shifts can cause me to faint. I couldn’t even go above the first observation deck on the Eiffel Tower when I visited Paris for spring break in high school.

Do you ever fly?

I find it amazing that you mention theme parks, because I literally discovered Defunctland on Monday and I’m loving it.

The Travel Channel had an excellent set of mini-documentaries on Disney. Reddit has links to several which found their way to the now-restored YouTube.

Funny you should mention amusement park histories because I’ve started following that side of YouTube extensively over the summer, due to Defunctland

Being constantly wanting to learn new things is a good thing; many of the problems we face in the world come from people deciding to lose their curiosity and stop learning. Not that learning about amusement parks is all that important in and of itself, but it’s the mindset that counts, and furthermore you may end up learning things that happen to be able to be applied to something completely different.

That said, the news is not exactly the best way to learn things. The news presents a skewed view of reality by presenting a biased, sensationalized, and surface-level view of the most extreme occurrences. Most of the time, if the news was to report on average everyday stuff, people wouldn’t really have any need to get numb to it. That’s not to say it should be ignored entirely, as we shouldn’t just ignore things just because they’re extreme cases, and even biases are things to learn about and analyze, but I guess what I’m saying is not to look at the news as a completely accurate picture of the world.

Biases really should be left up to editorials and not the news in general. At the end of the day, people really want the facts, not a political winged version of the facts.

Not sure if Rulett’s expression in panel two is dreamy or sarcastic. He does take alot abuse, not quite carrying the cross, but close right!

When I was a junior in high school, I applied to work at Cedar Point amusement park one summer. I lived in Nebraska, so it was way far away from home. The only reason I applied was because I had heard they provide lodging and food for their employees. It seemed like maybe a way to get out of my dead home town in the Great Plains.

I got the job, went up there at the end of May, and spent all summer until the first week of August. I worked between two giant roller coasters – on weekdays, it was the mine ride, and on weekends, it as the brand new Magnum (which I just realized has been around forever at Cedar Point since that was over 20 years ago). But I would crawl around the back area during lunch and my time off to see how things were working in other areas of the park. And it was fascinating to see how the mechanics basically had these alternate routes to and from rides that other employees were largely unaware of. Footpaths through bushes and under trees and behind food booths that we were always told to “stay away” from.

One day, they were retiring an older coaster that was for the kids, and I volunteered to help them remove parts and put them on pallets for the construction crew to cart away. I remember pulling off the brake belt – the part that you pull a lever and it raises the cars on the track so they slow down and stop – and it literally snapped off so easily that had it been in operation, the cars would have rolled past the platform and gotten stuck before the chain at the first hill. I was told that they knew the belt was bad the last few days of the ride, but they didn’t want to replace it since they knew it was going to be torn down. They had “duct taped” the belt for three days to keep it from breaking. I was mortified and amazed at how they had kept it working until the ride was shut down.

But I learned a lot about rides during that summer at Cedar Point. I also learned more about rides when I worked the last year at Peony Park was open in Omaha, Nebraska. That was a look back in history, since the Spin-A-Tron (the giant spinning barrel that pulled people to the walls) had been there since 1958, and it was 1992.

Cedar Point actually got a lot better and improved the maintenance/replacement schedule in 2004, and if you’re interested in seeing a park that’s been there forever, you can check it out here: https://www.cedarpoint.com/

I’ve watched some videos about cedar point I think.

“Duct Taping” the belt was a lawsuit waiting to happen. That was a major gamble on the part of the park operators.

Justin Scarred has been doing a lot of history posts on Disneyland and Knott’s Berry Farm. I think he’s a bit of an…acquired taste, heh, but I find them interesting.

You can spend days reading all of the articles, there.

Now you can do an amusement park arc (arc arc …).